EQT Corp., the largest natural gas producer in the Lower 48, said Thursday it has ended another round of curtailments, but management said it won’t hesitate to continue shutting in volumes as low prices warrant. 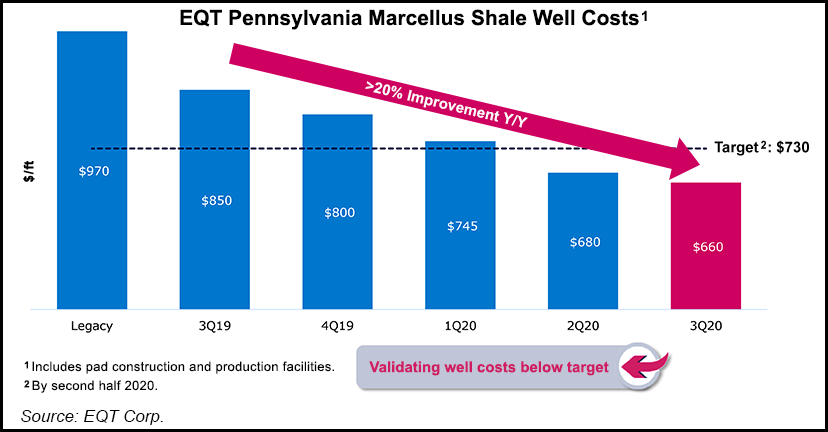 The Appalachian pure-play had curtailed about 400 MMcf/d beginning Sept. 1, cutting 15 Bcf from third quarter production volumes. The company slowly ramped up early this month, and has since turned online all the volumes. EQT previously curtailed 1 Bcf in May and ended those shut-ins by July, as other operators have throughout the basin this year.

“The driver for the curtailment program was a material price arbitrage between September and winter 2020 pricing and beyond,” said CFO David Khani of the latest curtailments. “Operationally, we’re able to defer those extra volumes to be monetized in a much more attractive future price environment.”

The shut-ins could continue if price volatility persists.

“While we were still able to deliver volumes near the midpoint of our guidance range, we will continue to use curtailments strategically to capture incremental value when the opportunity presents itself,” Khani added during a conference call to discuss third quarter results.

EQT has pursued aggressive cost cutting and overhauled its operations under the management team led by CEO Toby Rice that took over last year. For the second quarter in a row, Pennsylvania Marcellus Shale well costs came in below management’s long-stated goal of $730/foot, hitting $660 in 3Q2020. Horizontal drilling speeds also improved by 19%, with completion stages/day 15% better.

The gains came with an electric fracturing fleet, part of a broader effort to tap new technologies and automate processes, Rice said.  The efficiencies again allowed EQT to cut 2020 capital expenditures (capex) by $50 million at the midpoint to $1.05-1.1 billion, the fourth reduction to date.

“Put simply,” Rice said during the call, EQT is “leaving no stone unturned to find ways to improve the performance of this business.”

Management also is considering whether to curtail capacity on the 2 Bcf/d Mountain Valley Pipeline (MVP). Khani said discussions are ongoing with multiple parties interested in the capacity, some of which had committed to the similarly routed Atlantic Coast Pipeline (ACP). Dominion Energy Inc. canceled ACP in July after years of regulatory and legal challenges. MVP is nearly done, but it has also faced staunch opposition and continues to await key regulatory approvals. It is Equitrans Midstream Corp.’s marquee infrastructure project, and EQT is Equitrans’ largest customer.

Management declined to say whether it was pursuing Chevron Corp.’s sizable asset position in the Appalachian Basin following unsubstantiated reports. Chevron indicated last year it could exit the basin.

“We’re not going to speak about specific deals, but continue to believe that anything we would have a look at would have to be a good strategic fit at the right value and accretive on a free cash flow per share basis,” Rice said in response to a question.

Free cash flow came in at $47 million in 3Q2020, versus negative $178 million in the year-ago period. The gain primarily resulted from a $227 million cut in capex during the quarter.

EQT reported a third quarter net loss of $601 million (minus $2.35/share), compared with year-ago net losses of $361 million (minus $1.41) in 3Q2019. The loss mainly stemmed from a decrease in third quarter operating revenue, which fell to $172.1 million from $951.6 million in the year-ago period. Revenue fell because of a decrease in the value of the company’s New York Mercantile Exchange swaps and options that occurred with increases in forward prices.