Nearly a year after the company said it would suspend its Upper Devonian Shale drilling in favor of the deep, dry Utica, EQT Corp. is reviving the program, with management saying on Thursday that it’s a “use it or lose it play.” 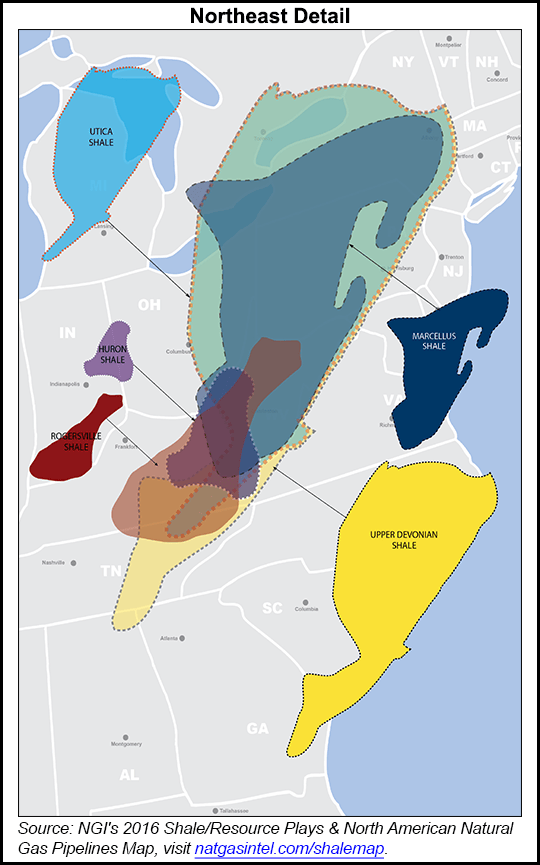 While the company has plans to turn a fifth deep Utica well to sales next month and spud another by the end of the year, it plans to slow down in order to more carefully analyze the data it has collected. The company said last August that it would suspend its Upper Devonian drilling this year and redirect more capital to the Utica, where it laid out plans to drill up to ten wells this year (see Shale Daily, Aug. 3, 2015).

“We continue to approach the Utica as an exploration project, trying various techniques, reviewing results, repeating what worked and trying new things in our effort to improve results both on recoveries and costs,” President of Exploration and Production Steven Schlotterbeck said Thursday on a call to discuss the company’s second quarter results. “We talked before about spudding five to ten wells this year and given the one-by-one nature of our program and a desire not to get ahead of the data, we expect to end up closer to five wells in 2016.” He added that the company would continue to provide updates on the deep Utica program going forward.

EQT announced the Upper Devonian suspension after a record-shattering Utica test in Southwest Pennsylvania in which its Scotts Run well — drilled and completed at a cost of $30 million — came on at 72.9 MMcf/d. Counting the Scotts Run in Greene County, the company has four deep Utica wells online. A fifth well, the West Run in Greene County, is currently being fracked and it will be turned to sales in August before the company heads to Wetzel County, WV, to spud the Big 177.

Schlotterbeck said the company turned its fourth Utica well, the Shipman, to sales in June. That well was stimulated with ceramic proppant unlike the previous two, which were fracked with sand. He said the Shipman showed an improvement over the last two wells. The company projects it will have an estimated ultimate recovery (EUR) of 2-3 Bcf per 1,000 feet of lateral.

In February, management said for the first time that the deep Utica could meet or exceed the performance of its core Marcellus Shale assets (see Shale Daily, Feb. 4, 2016). Since completing the Scotts Run, the company has had two primary goals for the Utica program. First, it’s aimed to get well costs down to $12.5-14 million. And second, it wants to achieve consistent results with EURs of 3.5 Bcf per 1,000 feet of lateral.

The Shipman well cost $14 million, and the company now estimates that it can drill and complete each Utica well for between $12 and $13 million. But as natural gas prices have lifted in recent weeks and as the outlook for gas production has improved, EQT plans to ramp-up its program in the second half of the year, turning to the Marcellus and Upper Devonian to do so.

The company brought online 38 Upper Devonian wells after it said it would suspend the program. Those wells had already been spud at the time of the announcement. A group of shallower shales above the Marcellus, the Upper Devonian horizon has remained a question mark for many operators, especially when compared to its more established cousins in the Marcellus and Utica. By comparison, the formation hasn’t been developed as much and the data set from the play is nominal.

“Based on the results we’re seeing, our type curve is now 18% higher on an EUR per foot basis. So, the economics of the Upper Devonian have improved,” Schlotterbeck said. “That’s combined with approximately 14% lower well costs. I remind you that our view of the Upper Devonian is that it’s a use it or lose it play. If we don’t co-develop at roughly the same time as the Marcellus, we think that reserve will effectively be lost.

“The bottom line is, the individual well returns for all these Upper Devonian wells are well above our cost of capital,” he added. “So, they’re economic opportunities that otherwise would be lost if we don’t capture them now.”

While the gas rig count has stabilized since the first quarter, EQT assumes a nine- to 12-month lag between new rigs arriving on site and first production, which management believes will continue to lower supplies. The reduction in activity, CEO David Porges said, has helped lift forward gas prices above $3 and prompted the company to escalate its drilling. EQT now plans to drill another 33 Marcellus wells and 30 Upper Devonian wells in addition to the 72 Marcellus wells and the Utica wells it announced in its 2016 operational forecast.

“These somewhat higher prices, especially in the context of our expectations of further supply decline, have caused us to conclude that this is a good time to begin the process of restoring our pace of development,” Porges said.

Other Appalachian operators that have reported second quarter earnings also have shared an improving outlook for the gas market. While Porges said the industry could overreact to a rebound in gas prices, he believes it won’t be as acute as it has been in the past.

The 63 new wells the company plans to spud in the second half are expected to increase the company’s sales volumes in 2017 to 800-810 Bcfe from the previous estimate of 750-760 Bcfe. Low service costs and more efficient wells are also expected to keep the company’s $1 billion capital expenditures budget the same this year.

Some of the new wells would also help fill takeaway capacity the company has coming online at the end of the year. Management added that none of those wells would be drilled on acreage the company acquired earlier this year from Statoil ASA in West Virginia (see Shale Daily, May 3)

EQT’s operational gains and higher volumes were still overshadowed by low commodity prices in the second quarter. The company’s average realized price was $2.11/Mcfe, down from $2.63/Mcfe in 1Q2016 and $2.75/Mcfe at the same time last year. Revenue sank to $127.5 million during the quarter from $439.6 million in the year-ago period.

The company reported a net loss of $258.6 million (minus $1.55/share), compared to net income of $5.5 million (4 cents) in 2Q2015. The quarter included a $234 million hedge loss that resulted from a significant improvement in forward gas prices and a $9.4 million charge for EQT’s decision to terminate the remainder of its defined benefit pension plan.