EQT Corp. announced Thursday that horizontal drilling in the Marcellus Shale helped the company achieve record sales volumes overall and in the Marcellus in 2012 — the latter an 85% increase from 2011 — as it posted net income of $183.4 million for the year. 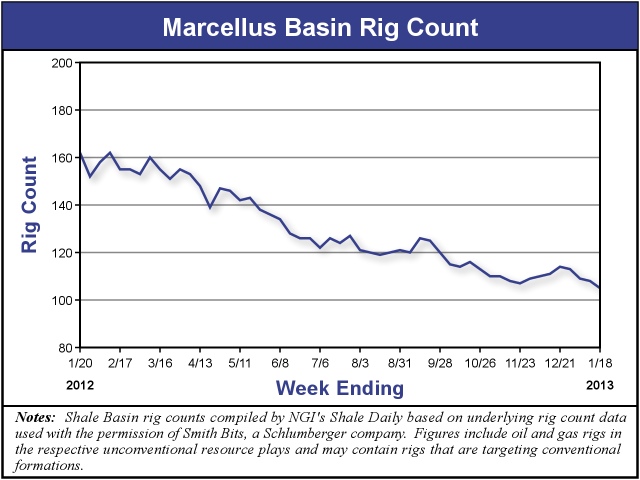 The company’s production division drilled 135 gross wells in 2012, with most (127) targeting the Marcellus with an average length of pay of 5,485 feet. Seven of the remaining wells were drilled into the Huron Shale, while one well targeted the Utica Shale. The company classifies its assets in the Lower Huron, Cleveland, Berea sandstone and other Devonian shales — except Marcellus — as the Huron play.

EQT said that as of Dec. 31, 2012, it had cumulatively drilled 375 horizontal wells in the Marcellus. Of those, 262 were online and 17 were complete but not yet online. The company has also cumulatively used 7,289 frac stages, a figure that includes planned stages for wells that have not yet been hydraulically fractured.

While drilling activity in the Marcellus has dropped precipitously over the last year due to relatively low natural gas prices, the shale play is still one of the most active in the country. For the week ending Jan. 18, there were 105 rigs actively drilling for oil and gas in the Marcellus, which is down 35% from the 162 rigs in operation one year ago, according to NGI’s Shale Daily Unconventional Rig Count. However, the play is third in unconventional drilling activity in the United States behind only the Bakken/Sanish/Three Forks (209 rigs) and the Eagle Ford Shale (229 rigs), which are both classified as being more liquids-rich.

The company’s midstream division had operating income of $237.3 million in 2012, an 11% increase from 2011. That figure excludes the $202.9 million the company made before taxes from the sale of its Big Sandy Pipeline in eastern Kentucky to Spectra Energy Partners LP (see Daily GPI, May 13, 2011), and its gas processing complex in Langley, KY, to MarkWest Energy Partners LP (see Shale Daily, Jan. 5, 2011).

Although the $183.4 million of net income EQT earned in 2012 was much lower than the $479.8 million it made in 2011, the company said that “to accurately review and compare the year-over-year earnings results, certain items should be considered.” Specifically, the company said the Big Sandy and Langley sales boosted the 2011 figures, while $62.2 million in net losses dragged down the bottom line for 2012.