EQT Corp. continued to consolidate its acreage position this week, with management announcing Thursday that it’s purchased another 14,000 acres in Marion and Monongalia counties, WV, from an undisclosed buyer for $130 million. 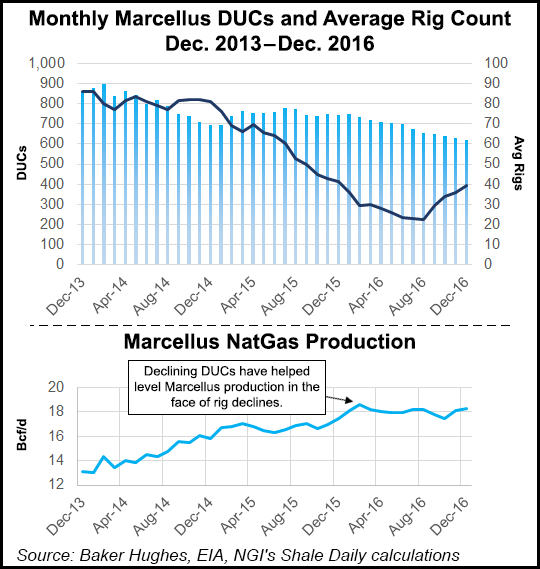 “We believe the biggest benefit from continued consolidation is the economic benefits of longer laterals,” said President of Exploration and Production Steven Schlotterbeck during the company’s year-end earnings call. “We will continue to look to add acreage that bolts-on or fills in our core acreage position.” EQT’s latest acquisition will allow it to extend 64 well locations from an average of 1,900 feet to 5,700 feet.

“The bigger position we build in the core certainly facilitates additional trades with our partners, who are also trying to consolidate their positions because they see the value as well,” Schlotterbeck added. “I think we’d like to continue to do some acquisition activity. We think the smaller deals — like we’ve done — are much more likely than any sort of large strategic merging of big players.”

Management has said that most of its new acreage would be developed beginning later this year. The company drilled 135 gross wells during 2016, including 117 Marcellus wells, 13 Upper Devonian wells and four Utica wells. Growth this year would come from wells spud in 2016, while this year’s activity is expected to lead to 15-20% growth in 2018.

The company said in July that it would slow its deep Utica development program to better analyze data and work more on its costs and completion designs in the play. It plans to spud seven Utica test wells this year. It is currently stimulating the Big 177 Utica well in West Virginia and drilling another in Greene County, PA.

EQT’s proved reserves increased 35% to 13.5 Tcfe. Including acquisitions, it replaced 555% of its 2016 production. The company has booked reserves from just five producing Utica wells in Pennsylvania and West Virginia, but hasn’t yet booked proved undeveloped and probable or possible reserves in the play.

The company beat the midpoint of its guidance in the fourth quarter, when it produced 198.4 Bcfe. That was up 28% from the year-ago period and up from 196 Bcfe in 3Q2016. EQT achieved its seventh straight year of more than 25% production growth in 2016, reporting 759 Bcfe.

“However, lower average realized prices more than offset the increased production,” CFO Robert McNally said. “The average realized price, including cash settled derivatives, was $2.47/Mcfe, which was 62 cents, or 20% lower than in 2015.” While they were down slightly from the year-ago period, fourth quarter prices were better at $2.92/Mcfe.

The company’s midstream master limited partnership, EQT Midstream Partners LP, reported higher year/year volumes in 2016. It reported net income of $538 million for the year, which was up from $455.1 million in 2015.