EQT Corp. is accelerating a plan to address shareholder concerns that the stock is trading at a discount to overall value, announcing that a board committee would make recommendations by the end of March. 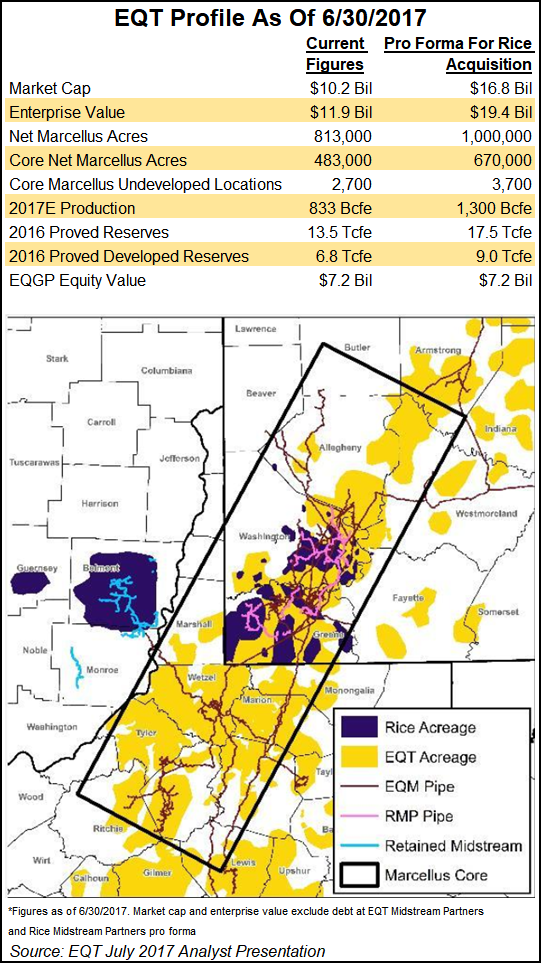 The company said late Wednesday a committee would be created immediately if its acquisition of Rice Energy Inc. closes as expected in the fourth quarter. EQT in June agreed to acquire Rice for $8 billion to create the nation’s largest natural gas producer.

Hedge fund Jana Partners LLC, which owns nearly 6% of EQT’s shares, has since bombarded the company with concerns about the deal, maintaining that it will cost too much and should be scrapped in favor of splitting the upstream and midstream businesses. Hedge fund D.E. Shaw & Co. LP, which owns about 4% of the shares, said in a letter to the board on Thursday it is in favor of the merger, but it urged EQT to separate the pipeline business if the deal is completed.

The board committee would be led by seven-year member Stephen A. Thorington. The announcement expedites a plan to address concerns by the end of 2018.

CEO Steve Schlotterbeck said the company has received positive feedback from shareholders, sell-side analysts and others about the decision to acquire Rice, which includes midstream assets. The deal would not only “enhance our ability to unlock the embedded midstream value,” but also address the company’s “sum of the parts discount,” he said.

EQT has conservatively estimated that the merger could create $2.5 billion of cost synergies, but it has also noted that longer laterals, administrative savings, buying power and marketing optimization, among other things, could create up to $7.5 billion in synergies. In letters to the company, Jana founder Barry Rosenstein has said management has “conjured up dubious additional synergies” to help sell the acquisition, which could mostly be achieved without the acquisition.

In the proxy filing last week, Jana said it was not convinced that management’s incentives to pursue the acquisition are aligned with those of shareholders, and it questioned long-term executive compensation, which has been tied to three-year average production growth.

“This growth, however, is not measured on a per share basis,” the firm wrote. “Instead, an acquisition — like the proposed acquisition — that is extremely dilutive to shareholder value can still increase management compensation by millions of dollars by allowing management to achieve its incentive targets by acquiring production volume regardless of its value to shareholders.”

EQT reiterated late Wednesday that it would exclude Rice volumes from the long-term executive compensation plan. It also said that production volumes would no longer be a performance metric for compensation programs and instead be replaced by efficiency metrics such as those for operating and development cost improvements.

“While we’ve seen a generally positive response to the Rice transaction, the announced initiative should help ease any remaining concerns,” Tudor, Pickering, Holt & Co. analysts wrote in a note Thursday. “In our view, the next steps likely include a midstream consolidation and eventually a tax-free spinoff to shareholders, which should work to unlock significant value from the enterprise.”