EQT Corp. is in discussions with multiple liquefied natural gas (LNG) end-users across the world and may invest in liquefaction capacity as the call for U.S. exports grows. 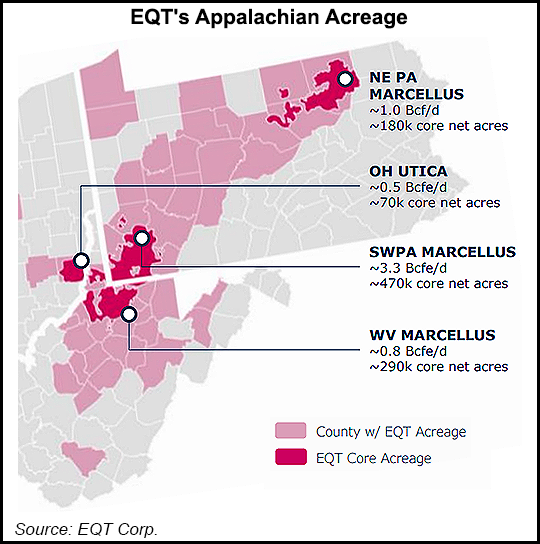 The country’s largest natural gas producer already sells volumes to U.S. export terminals. It moves 1 Bcf/d from the Appalachian Basin to the Gulf Coast. However, the independent expects LNG exports to have a meaningful impact on its balance sheet by the middle of the decade.

An LNG contract could be signed by the end of the year, Rice said. U.S. producers  including  EOG Resources Inc. and APA Corp., already have signed deals with top U.S. exporter Cheniere Energy Inc. The EOG and APA transactions provide gas at prices linked to foreign indices, but Rice did not detail EQT plans.

“Some of the contract structures we’re looking at are to provide a collar-type structure for these international buyers and obviously it’s going to be something that respects where TTF is right now, but going longer-term just gives us exposure to rising prices,” he said Thursday during the first quarter earnings call.

EQT could help international buyers “avoid the blowouts,” Rice said. “That’s really the part that hurts their countries and their economies, is these really significant pricing swings that they’re experiencing right now.”

Russia’s invasion of Ukraine has exacerbated the undersupply of traditional energy sources such as natural gas. Rice said the world needs to utilize all its decarbonization options and invest more in natural gas.

EQT launched an initiative this year to promote U.S. LNG exports, which Rice has framed as “the largest green initiative in the world.” EQT is pushing to quadruple U.S. LNG capacity to 55 Bcf/d by 2030 to replace international coal at an “unprecedented pace” and cut global emissions.

“All we need to do is build pipelines and more LNG infrastructure, no technology breakthroughs, no subsidies, nothing but building what we’ve built for decades,” Rice said.

He said the initiative has traction, as the Biden administration has committed to fast-tracking LNG export terminals and is helping Europe secure supplies to displace Russian volumes.

“At EQT, we are uniquely positioned to be the linchpin in putting this plan into action,” Rice said. “As the largest natural gas producer in the U.S., our scale provides a material supply base with multiple decades of core, high return inventory.”

The company is also poised to capture natural gas upside at home, said CFO David Khani. He  pointed to U.S. storage inventories, which are likely to remain low heading into next winter. The company has restructured some of its hedge book to seize on the shift in gas prices.

Khani added that Appalachian fundamentals remain solid too. Production in the region where EQT operates in Ohio, Pennsylvania and West Virginia, has trended lower than forecasts on widespread capital discipline, a lack of pipelines and oilfield services constraints.

Gas-fired power generation has ramped up, as well, while coal supplies have dwindled. Khani noted that Europe’s decision to ban Russian coal imports could also lead to even higher gas demand as more Appalachian coal supplies are likely headed for Europe to fill the gap.

Adding to the domestic tailwinds, EQT is seeing strong demand for its independently certified natural gas. The company has signed 13 deals for the environmentally differentiated natural gas totaling more than 3 Bcf/d.

Management noted that inflationary pressures on steel, labor and sand supply are clouding the outlook slightly. Given the agreements it already has in place, the company is for now sticking with its $1.3-1.45 billion capital expenditures budget this year.

Meanwhile, EQT said it has reduced completion and turn-in-line activity, along with liquids production guidance this year, as it aims to stay within budget given rising costs.

The company produced 492 Bcfe during the first quarter, up from 415 Bcfe at the same time last year. The higher output followed the company’s acquisition last year of Alta Resources Development LLC.

Average realized prices jumped to $3.19/Mcfe during the period, up from $2.61 at the same time last year.

EQT reported a steep first quarter net loss of $1.5 billion (minus $4.05/share), compared with  a year-ago net loss of $37 million (minus 13 cents). The 1Q2022 results were impacted by a $3 billion loss on derivatives, which offset higher sales revenue.