EQT Corp. now expects the Mountain Valley Pipeline (MVP) to come online in 2023, which could help narrow its natural gas price differentials and ease Appalachian takeaway constraints, but management acknowledged last week that the “specter of timing” continues to loom over the project. 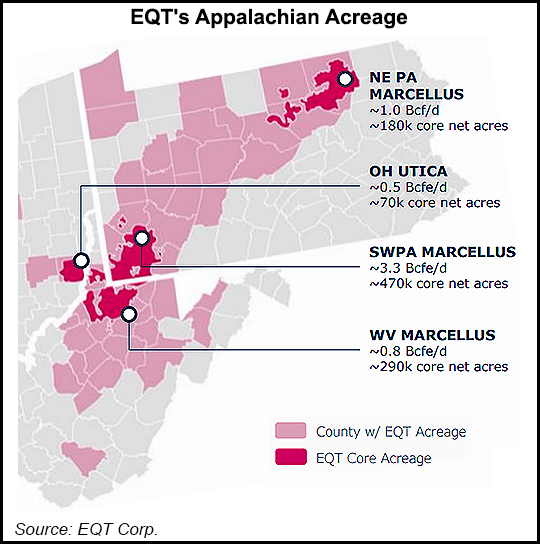 EQT has capacity booked on the system and a stake in MVP’s lead sponsor Equitrans Midstream Corp, which expects the project to start up this summer. Equitrans is reviewing that timeline after a federal appeals court last week vacated MVP’s Endangered Species Act authorizations and set back construction further.

The pipeline has been dogged by regulatory delays. EQT CFO David Khani said during a call last Thursday to discuss year-end results that the company sold some of its shares in Equitrans during the fourth quarter and would consider selling more as the stock has declined.

“We’ll be thoughtful in when we want to sell them again,” he said. “I think the specter of timing is unknown on MVP. So, we’ll probably be a little patient here given that the stock is now under $8. We’ll wait until we get the view on MVP and the timing because I think that’s creating a cloud obviously over Equitrans’ stock.”

EQT, the nation’s largest natural gas producer, reported higher average realized prices for 2021 of $2.50/Mcfe, up from $2.37 in the prior year. Those gains were offset by wider differentials, however, as pipeline constraints in the Northeast have dented the realizations of Appalachian producers.

CEO Toby Rice said high energy prices in New England are the direct result of takeaway issues in Appalachia. He also cautioned that a rapid energy transition and resistance to natural gas projects in places like Europe have led to higher energy costs as well.

Rice said his team has been working to get a stronger grip on what they can control. EQT reported steep losses on hedges last year as prices crept upward. However, Rice said the company has started implementing an updated hedging strategy that “provides downside protection, while leaving large-to-upside exposure to higher natural gas prices.”

CFO David Khani noted that the company has paid off more debt, allowing it to “switch from a defensive hedging strategy with nearly all swaps to a more balanced approach” for 2023. The company has about 65% of its production volumes hedged for 2022 and another 42% hedged next year. EQT has layered on an overall floor of $3/Dth and a ceiling of $5/Dth in 2023.

Management also guided for 2022 capital expenditures (capex) of $1.3-1.45 billion to produce between 1.95-2.05 Tcfe. Guidance was higher than last year’s capex of $1.1 billion and above Wall Street consensus.

Inflationary pressures and incremental spending for a new well design are likely to push spending higher this year.

Management said the company would phase in a “next generation” well design in 2022 that’s been under development for the past year. Preliminary results from those wells are expected by the end of the year.

“We have confidence in beginning to phase in a next generation well design in 2022 that is geared toward further improvement in well productivity and drilling economics, leading to long-term free cash flow and value creation as we apply these learnings across our long runway of core inventory,” Rice said.

EQT produced 527 Bcfe in the fourth quarter across its Marcellus and Utica shale assets in Ohio, Pennsylvania and West Virginia. That’s up from 401 Bcfe in 4Q2020. Full year production was 1.9 Tcfe, up from 1.5 Tcfe in 2020. Rising volumes were the result of EQT’s acquisition of Alta Resources Development LLC and Appalachian assets it purchased from Chevron Corp.

The company also continued to make headway on a concerted push to clean up its production and strengthen environmental, social and governance initiatives. Rice said third parties have now certified that most of its natural gas is produced in an environmentally-responsible way.

He added that the company has signed 10 deals to sell 1.2 Tcfe of certified production for $60 million in premiums to benchmark prices. EQT has previously said at least one deal was completed with an international buyer.

EQT is also continuing to attract interest from several liquefied natural gas parties across the value chain, Rice said. Any of those supply deals could give it exposure to international prices and growing demand for natural gas overseas amid a shortage of the fuel in some markets. He indicated that demand is only likely to grow as the energy transition will create a need for more natural gas.

“The macro events we are seeing are forcing a conversation grounded in reality, and we believe that conversation will end with a significant call on U.S. natural gas,” Rice said.