While numbers persistently climb under the line-item for Marcellus Shale production on EQT Corp.’s balance sheet and growth rates dominate its quarterly earnings calls with analysts, the first quarter talk on Thursday was pointedly focused on the company’s future in Ohio’s Utica Shale. 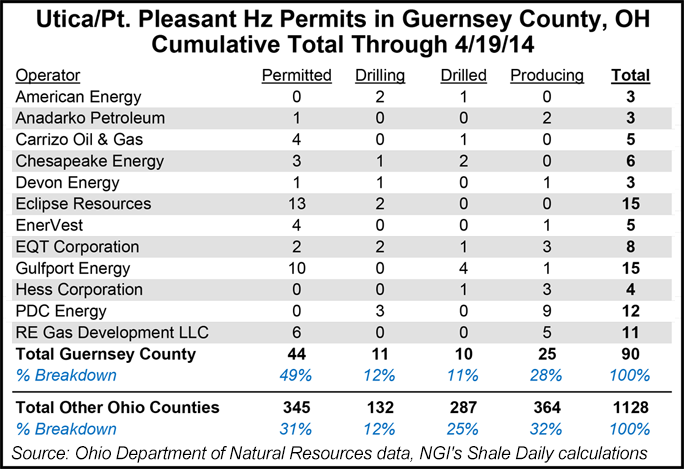 During its year-end conference call, the company had set forth plans to drill 21 wells in the Utica during 2014 (see Shale Daily, Feb. 13), but it “revised that number to zero,” said CFO David Porges during a call Thursday to discuss first quarter earnings. Instead, EQT will complete and evaluate just five wells that it drilled in the play last year, and if the company “can’t make improvements, it’s not going to be a play that we’ll put more capital into,” said Steven Schlotterbeck, vice president of exploration and production.

“The decision was driven by the fact that the first wells that we drilled were not where they needed to be to have a viable economic play there. We have some very specific completion design changes we’re going to implement, but we just thought it prudent to execute those changes and get the data and evaluate it,” Schlotterbeck said. “We do expect that since we’re doing it in two phases, that we’ll see some changes based on that first phase and then collect data from the second phase before we commit a lot of capital dollars into another drilling program. We’ll learn a lot from those five wells and we just want to be prudent with the decision we’re making.”

EQT has 3.6 million acres under lease in Ohio, West Virginia, Pennsylvania, Kentucky and Virginia. In Ohio, the company has eight wells permitted in Guernsey County in an area where other operators have seen favorable results (see Shale Daily, Nov. 19, 2013). That’s where the five wells the company plans to complete and evaluate this year are located. Three of those will soon be completed and the other two will be finished later this year.

The capital EQT had planned to allocate to those 21 Utica wells will now go toward drilling an additional eight wells in the Marcellus and another 13 wells in the Upper Devonian shales this year. EQT management said it continues to evaluate its Utica options in West Virginia, where more operators are flocking to drill the formation outside Ohio (see Shale Daily, March 26).

“It’s certainly higher pressure and certainly very widespread from a geologic standpoint,” Schlotterbeck said of the company’s Utica acreage in West Virginia. “I think the producibility of the reservoir in certain areas is still unknown. One of the biggest challenges for us is the depth…it’s a cost challenge and a completion challenge.”

The company’s doubts about its play in the Utica, though, didn’t overshadow its strong operational results in the first quarter, when it once again set a record for production and gathering volumes. First quarter production was up 30% over 1Q2013 at 106 Bcfe. The cold of last winter also seemed to do little in slowing it down during the quarter, as it outpaced 4Q2013 production, which was 103 Bcfe.

In the Marcellus and Upper Devonian shales the company produced 923.6 MMcfe/d, while natural gas liquids volumes were up by 16% over the prior-year quarter.

Wells Fargo Securities analyst Gordon Douthat wrote in a note to clients that EQT beat its earnings-per-share forecast by a wide margin, primarily on lower expenses and production in the first quarter that was 2% ahead of its guidance.

If anything, the cold weather of the winter seemed to lift the first quarter fortunes of EQT, with natural gas averaging $5.34/Mcfe, which was 28% higher than in 1Q2013. It also benefited from third-party transmission contracts that increased to meet demand.

Management also continued to duck speculation about a plan to drop down EQT midstream assets to affiliate EQT Midstream Partners LP (see Shale Daily, Feb. 14, 2012). Porges said a sale will come sometime this year, but he added that no specifics will be given before such an announcement.