EQT Corp. continues adding to its massive position in the Marcellus and Utica shales, saying late Tuesday that it has acquired all of Chevron Corp.’s Appalachian assets for $735 million in a deal expected to boost operating efficiencies and free cash flow. 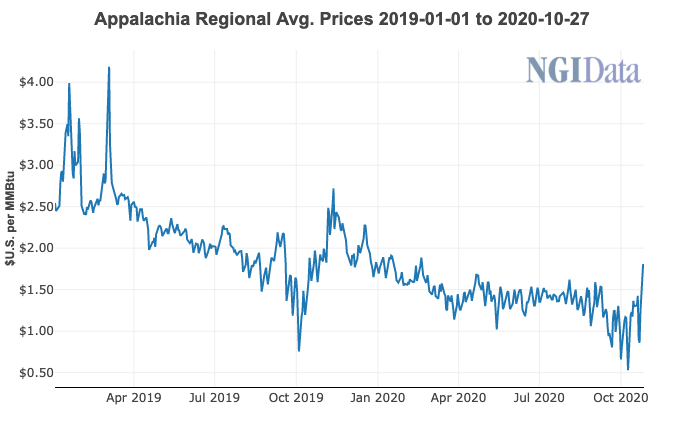 Expected to be completed by year’s end, the sale includes 450 MMcfe/d of production, 335,000 net acres, 100 wells in progress, two water systems and associated infrastructure. The bulk of the assets are located in southwest Pennsylvania and northern West Virginia, while the rest are in northeast Ohio.

“This acquisition is a natural bolt-on extension of EQT’s dominant position in the core of the southwest Marcellus,” said CEO Toby Rice. The purchase price is underpinned by proved developed producing reserves that “provide material upside to the company.”

EQT said the deal includes 125,000 core net Marcellus acres, with production consisting of 75% natural gas and 25% liquids in both the Marcellus and Utica. The company would also gain a 31% ownership interest in Laurel Mountain Midstream, a natural gas gathering system in Pennsylvania and West Virginia.

BMO Capital Markets analyst Phillip Jungwirth said the Chevron assets are a good “strategic fit” with EQT’s footprint in southwest Pennsylvania, while additional properties the company is acquiring from Chevron in Marshall County, WV, would improve its liquids portfolio.

“…The deal is a highly accretive bolt-on with the potential for operational, marketing and scale synergies,” Jungwirth said.

EBW Analytics Group said the purchase could limit the company’s ability to increase capital expenditures (capex) next year even if natural gas prices continue to rise as they have been.

But the company has cut costs aggressively, including slashing capex four times this year. As a result, Moody’s Investors Service said it expects the company to exercise similar spending restraint next year and prioritize debt reduction over reserves and production growth. Moody’s on Wednesday changed the company’s credit rating outlook to positive from negative.

Rice took over the company last year, and the management team has been focused on cutting costs and finding more efficiencies ever since. The Chevron deal had been rumored since last month and comes days after Bloomberg reported that EQT proposed a takeover of Appalachian rival CNX Resources Corp.

EQT has been actively consolidating in the basin for a few years. Since 2016, it has acquired Rice Energy Inc., Trans Energy Inc. and assets from Stone Energy Corp. and Equinor ASA, among others.

Chevron indicated late last year that it would sell its Appalachian assets amid slumping commodity prices to focus on higher yield assets. Chevron entered the basin in 2010 in a deal to acquire Atlas Energy Inc. for $3.2 billion in cash and $1.1 billion of debt, saying at the time that the deal gave it “premier acreage positions in the prolific Marcellus.” Average spot natural gas prices at Henry Hub were $4.37/MMBtu in 2010, compared to an average of roughly $1.87 so far this year.