Oil and natural gas exploration companies plan to keep the focus on low-cost opportunities this year, with an emphasis on creating value, capital efficiency and returns on investments, according to Wood Mackenzie Ltd. 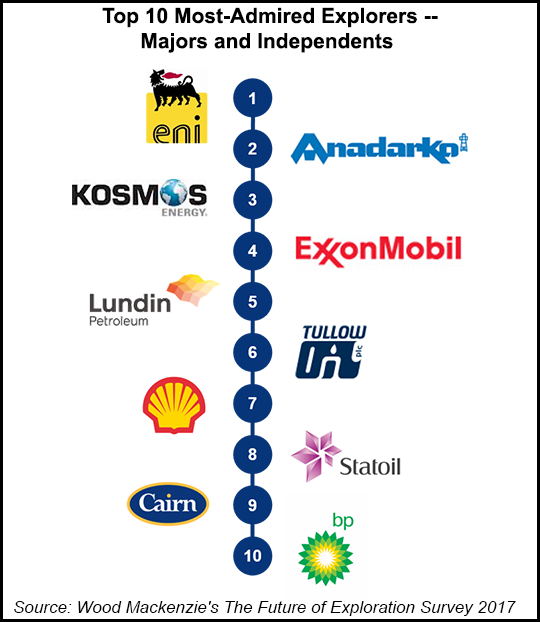 In a survey of 200 senior exploration and production (E&P) professionals, the consultant wanted to determine if a true recovery in the industry is emerging.

“It comes as no surprise to hear that companies will continue to explore low-cost opportunities in 2017,” said Wood Mackenzie researchers. National oil companies plan to “put more emphasis on growth and higher exploration impact, while value creation, capital efficiency and returns on investment are all high on the priority list.”

The “top resource capture options” worldwide continue to be conventional exploration and increased recovery from existing assets, with value creation considered the most important metric to demonstrate performance.

The short-term focus “remains in mature basins for high-margin, low-cost and near-field prospects” and away from deepwater and frontier basins.

Wood Mackenzie also quizzed executives about the E&Ps they most admired. Leading the list is supermajor Eni SpA, which is headquartered in Italy. Second on the list is U.S. super-independent Anadarko Petroleum Corp., based near Houston in The Woodlands. Anadarko has onshore and offshore expertise, with operations weighted to the U.S. onshore and deepwater Gulf of Mexico. Its exploration philosophy today centers around the “three Ds” — defined as the deepwater, Denver-Julesburg Basin of Colorado and the Permian Basin’s Delaware sub-basin.

The Los Angeles (LA) City Council on Wednesday unanimously approved a motion to prohibit drilling new oil and gas wells, phase out production from existing wells, and establish a plan for plugging and remediating all wells in the city. “From Wilmington to the San Fernando Valley, gas drilling and oil wells have disproportionately affected the…