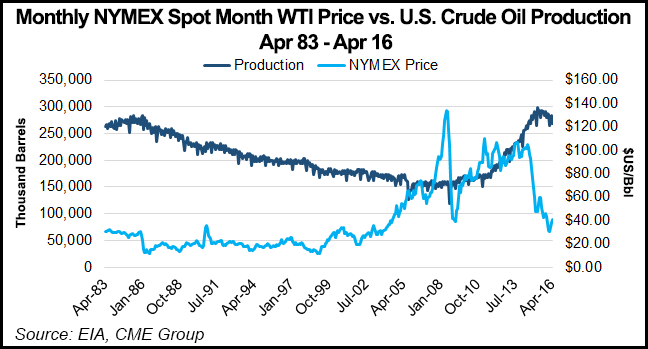 “However, despite these headwinds, based on the recent improvements to North American activity, I believe that the second quarter will mark the trough for our earnings,” Lesar said.

After weathering the downturn the last year and a half, Halliburton’s North American “customers are thinking about growing their business again rather than being focused on survival,” Lesar said. “There are two distinct factors at work in North America — psychological and economic. And I think it’s critical to understand them both. Now, you haven’t heard me talk about the psychology of North American producers before. But given what has happened to many of our customers in the last 18 months, I think it’s an important point to understand.

“I’ve spent a large amount of time with customers late in the quarter taking their pulse, and I can tell you there is a growing survivor mentality out there. And you can’t underestimate the positive change in attitude that we are seeing in our North American customers.There is a spring in their step that I didn’t see earlier in the year. And in almost every case, they’re talking about adding rigs, buying assets, or doing something value accretive. In short, they are getting back to business.”

When oil reached $50/bbl it served as “a critical emotional milestone for our customers,” Lesar said. The psychological impact “can be summed up best by one customer who told me, ”Dave, it’s actually a light at the end of a tunnel and not an oncoming train.’ So to borrow a Keynesian economic term, the animal spirits are back in North America.”

Still, the economics in North America present challenges, as pricing still hasn’t done enough to bolster cash flow for E&Ps needing to repair their balance sheets, he said. Many of Halliburton’s customers face “severe declines in production” after not drilling many wells during the downturn. Figuring out how best to gain access to capital is still a major concern for “a large segment” of the market, he said.

“This evaluation is around whether to do dilutive effect deals, accessing the high-yield markets, looking at reserve base lending or partnering with private equity,” Lesar said. “But the important point is they’re back in business.”

Global capital expenditures have been cut by $400 billion the last two years, he said. Coming off this “period of significant underinvestment,” the market looks to need an estimated 18-22 million b/d of new production by 2021.

This means “we have to find nearly two Saudi Arabias worth of production in the next five years.” This will require “structural changes” in the market, Lesar said, starting “with a supportive commodity price, and we’re not there yet today. But prices will have to get there soon, or the supply challenges will be even greater.”

With this “looming supply shortfall…U.S. unconventionals will likely be the first and deepest beneficiary of growing supply shortages, and you can be sure [E&Ps] want to reap some of that benefit,” Lesar said.

Besides repairing balance sheets, E&Ps will need to replenish their workforce after losses due to retirements and cutbacks, Lesar said. The industry will “have to find sustainable ways to deepen the relationships between operators and service companies, collaborating to integrate better, eliminate duplication and drive down delivery costs.”

Producers will also “have to accept the reality of service company economics,” he said. “Some of the efficiency gains we have made with our customers are in fact sustainable and will continue, but others, including deep, uneconomic pricing cuts, are unsustainable and will have to be reversed…We are in an environment where service providers are unable to meet their cost of capital and many are struggling to recover even cash costs.”

Having grown its market share during the downturn, Halliburton is well-positioned to take advantage of the recovery, Lesar said. After savings resulting from structural changes to the company’s delivery platform, management is “confident that North American margins can begin to recover” during 3Q2016.

“We are prepared for the North American upcycle,” he said. “Our approach to the market remains unchanged. The North American market is turning, it will recover the fastest and Halliburton will be the biggest beneficiary.”