Growth in energy sector activity slowed significantly in the final three months of 2018, according to the quarterly Dallas Fed Energy Survey of oil and gas executives. 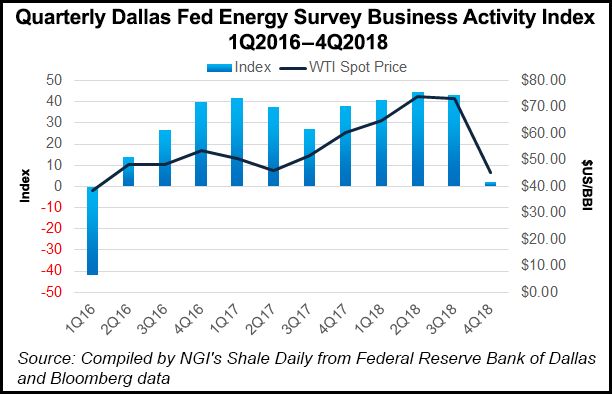 The biggest measure of conditions, the business activity index, remained positive, “but barely so, plunging from 43.3 in the third quarter to 2.3 in the fourth,” researchers said. Readings near zero indicate activity mostly was unchanged from 3Q2018, which is “a break from the 10-quarter-long trend of rising activity.”

Firms were surveyed about whether business activity, employment, capital expenditures (capex) and other indicators increased, decreased or remained unchanged sequentially and year/year. Survey responses are used to calculate an index for each indicator.

The reduction in the 4Q2018 index was driven by both E&Ps and OFS firms. Positive readings generally indicate expansion, while readings below zero suggest contraction.

According to E&P executives, production increased overall for the ninth consecutive quarter. However, the oil production index moved down from 34.8 in 3Q2018 to 29.1 in 4Q2018. Additionally, the natural gas production index fell from 35.5 to 24.8.

The index for utilization of equipment by OFS firms also showed a sharp sequential decline, with the corresponding index in 4Q2018 at 1.6, down 43 points from 3Q2018.

“This suggests utilization rates remained relatively unchanged from the third quarter. Input costs on the services side increased, but at a slower pace as the index declined from 46.6 to 36.7,” said researchers. “Meanwhile, the index of prices received for oilfield services fell sharply from 23.2 to zero, suggesting prices were unchanged on a quarter/quarter basis.”

For the labor market, indexes “pointed to moderation in both employment and work hours growth” in the final three months, particularly for the OFS sector, while wage growth accelerated overall.

When asked about expectations for where West Texas Intermediate (WTI) oil prices would be by the end of 2019, the average response was $59.97/bbl, which was close to $11 higher than the average spot price during the survey period, which was $49.22. Responses ranged from $45 to $80.

“On average, respondents expect Henry Hub natural gas prices to be $3.34/MMBtu at the end of 2019. Responses ranged from $2 to $5.50,” researchers noted. For reference, Henry Hub spot prices averaged $3.97/MMBtu during the survey collection period.

In the latest compilation, executives were asked their capex expectations in 2019 versus 2018.

“Responses were mixed among executives, although most expect their firm’s capital spending to increase in 2019 compared with 2018,” said researchers. “Thirty-seven percent of executives said they expect capital spending to slightly increase, while an additional 16% anticipate a significant increase.”

Around 17% expect capex to decrease slightly, while 13% anticipate a significant decrease. Another 17% expect spending to remain near 2018 levels.

Said one E&P executive, “I can’t help but feel we are in for another extended period of low prices. The only way for me to survive is to quit spending money.”

Another executive said there should be “less interference in the markets so public equity would re-enter the sector. The result would be substantially more business activity and more domestic energy.”

One E&P executive said the company’s “primary goal is to continue with a robust capital program within free cash flow.”

Asked to provide a specific price for WTI used for capital planning this year, executives said they expect prices to average $54/bbl, with responses ranging from $50 to $64.99. Only 9% thought prices would be below $50.

E&P executives were also presented with eight potential goals for 2019 and asked to select their firm’s primary one from the list. Forty-six percent selected “grow production” as the primary goal, while 13% said “acquire assets” and 9% indicated “maintain production.