The Gulf of Mexico oil and natural gas auction held Wednesday attracted two high bids for more than $20 million and four others for $10 million-plus, a sure sign that the energy industry is suiting up for a dive back into the offshore. 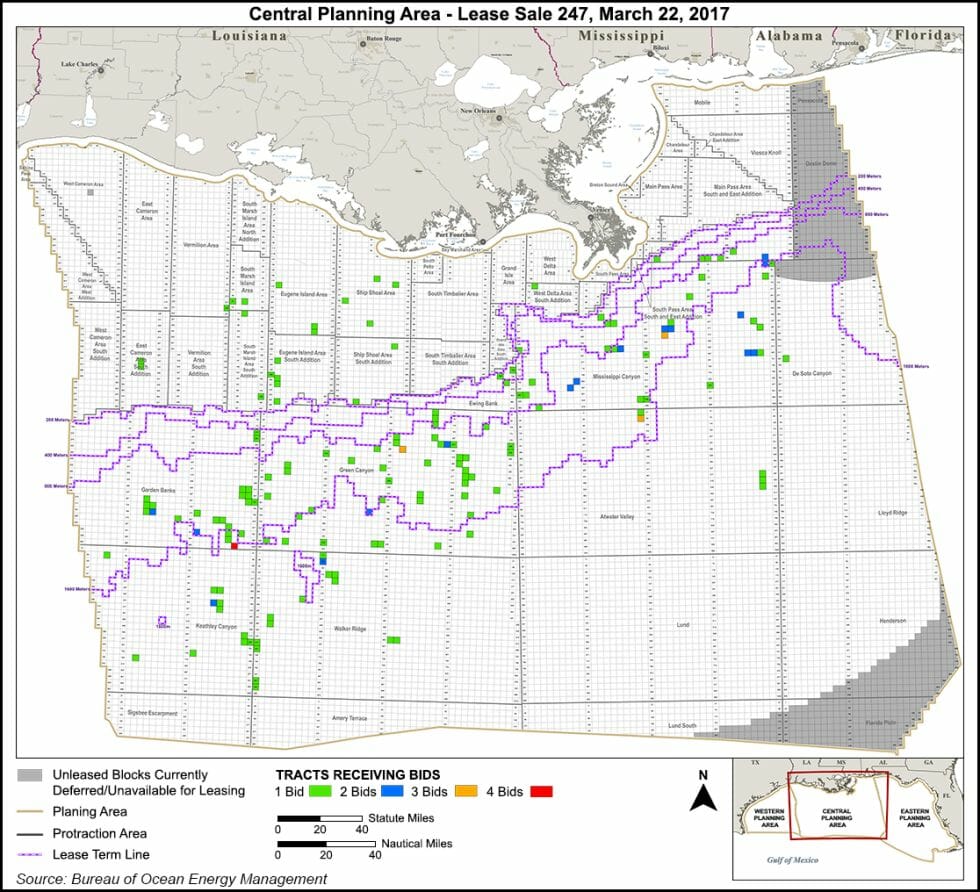 A total of 28 producers bid for the opportunity to explore offshore Louisiana, Mississippi and Alabama in the 12th and final Outer Continental Shelf lease sale of the 2012-2017 program. The Department of Interior’s Bureau of Ocean Energy Management (BOEM) conducted Central Planning Area (CPA) Lease Sale 247 via webcast from New Orleans.

A total of $274.797 million in high bids was offered, with total bids amounting to nearly $315.304 million. The sale, which covered 48 million acres, all unleased and nonprotected areas, drew 189 bids on 163 blocks covering 913,542 acres, said BOEM’s Michael Celata, who directs the GOM Region.

Shell Offshore Inc. topped all bidders with close to $24.1 million for Atwater Valley Block 64, an active deepwater area, Celata said during a conference call to discuss the results.

This year’s auction “shows a continued interest in the Gulf of Mexico, especially deepwater,” Celata said. Most of the bids were for blocks in water depths of at least 400 meters. “That’s been the trend over the last few years.”

The “sizes of the bids show some pretty good prospects,” and the high bids prove “the continued viability of the Gulf of Mexico for oil and gas.”

While Shell’s bid for the Atwater Valley block topped all others, the deepwater Garden Banks (GB) Block 1006 drew the most interest with five bids. Total E&P USA Inc. was high bidder at close to $12.6 million.

The other top bidders, blocks and water depths were:

BOEM plans to evaluate the bids for fair market value for the next three months, with awards posted on the website as they are completed.