The U.S. natural gas and oil sector is likely to achieve moderate growth this year, preferring to hoard cash, reduce debt and continue investor payouts while awaiting stronger commodity prices, according to a bevy of energy analysts and executives. 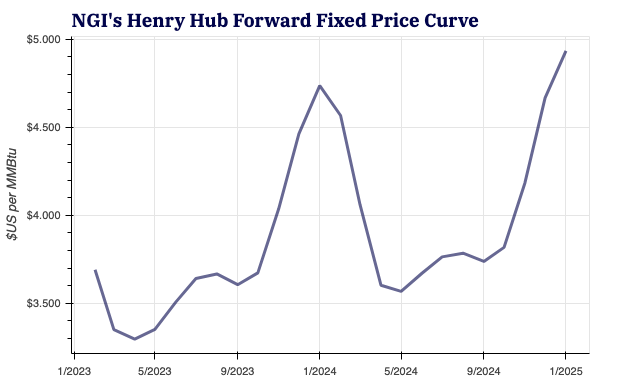 NGI pored through detailed forecasts by analysts and discussed the 2023 outlook with energy executives for insight into what to expect this year. It’s still early, but exploration and production (E&P) companies are likely to remain disciplined over incurring debt.

The upstream sector should have “another strong year,” but commodity prices and free cash flow (FCF) are unlikely to match 2022 levels, according to Moody’s Investors Service. Mizuho Securities USA LLC is forecasting the U.S. gas macro also to be “challenged until further LNG capacity comes online in late 2024.”

The mantra across the board is once again FCF repeating the capital discipline demonstrated in 2022 and 2021. E&Ps no longer want to be caught flat-footed by unforeseen events that jolt the commodity markets and send them scrambling.

“Don’t give up on the U.S. onshore just yet,” said Mizuho analyst Nitan Kumar. “While cash returns may be lower year/year in 2023 due to weaker commodity prices, payout ratios will be higher.”

Shale well productivity “may have plateaued,” but the decline last year in productivity “can be attributed to private operators drilling in (presumably) lower quality assets.”

FCF this year, though, may trump all. Since the sharp commodity price downturn in late 2015 and into 2016, E&Ps today are a disciplined lot, more apt to reward shareholders than incur debt to add to their resources.

“While we suspect E&P management teams are unlikely to walk back on current cash return commitments in the near term, we expect investors – especially those with longer investment horizons – to focus on the sustainability of value creation rather than the immediacy of it,” Kumar said.

“We are now in a world where energy security has taken center stage and with that, the need to rebuild production capacity after years of underinvestment,” West said. “North America will not be able to step in as the swing producer.”

Wood Mackenzie analysts said the Russia-Ukraine war threw the “energy trilemma into sharp focus. Oil and gas are part of the solution to finding a balance between security, affordability and sustainability. The immediate call on the industry is for more of both, as fast as possible.

“Yet the longer-term desire remains for an accelerated shift away from hydrocarbons. It’s the same, somewhat contradictory, challenge that oil and gas companies have wrestled with for the past five years. The crisis of 2022 has generated new opportunities but also amplified the challenge and exacerbated the associated risks.”

Last year had begun with high expectations across the energy sector to enact environmental, social and governance (ESG) frameworks. ESG is still on the table, but don’t expect to hear as much about it in the coming months by traditional E&Ps. Energy security demands should continue to usurp ESG, according to Moody’s John Thieroff, senior credit officer.

“The energy sector faces a number of conflicting energy transition pressures for 2023 and beyond,” he said. Producing fewer fossil fuels to decarbonize remains a priority to limit the rise in global temperatures. However, sanctions on Russia’s oil and natural gas exports “removed a significant source of supply from the market, and risks will persist about energy security, affordability and maintaining high levels of reliable production.

“A large majority of spending will be directed toward traditional oil and gas operations, with a still small but growing share directed toward new energy businesses. Europe’s emergent need for LNG amid the displacement of Russian gas will drive considerable investment over the next several years, including a push to install more multi-decade-lived assets and further supporting natural gas’s incumbency.”

To that end, E&Ps should continue to shuffle their portfolios, according to Wood Mackenzie’s team.

“Oil and gas operators will quietly maintain their focus on investing in security of supply while showcasing decarbonization progress,” analysts said. “Portfolio reconfiguration along more resilient and sustainable resource themes will continue, while a handful of advantaged operators will make inroads on developing ‘carbon capture as a service’ business models.”

Some hurdles remain to be jumped.

In addition, the natural gas-weighted E&Ps are facing a dearth of liquefied natural gas export startups (unlikely before 2024) and potential Lower 48 pipeline bottlenecks.

Lower natural gas prices also pose a roadblock to accelerate drilling, according to Tudor, Pickering, Holt & Co. (TPH). Analyst Matt Murphy and his team have a “negative bias” on natural gas pricing into the summer, which could lead to rigs coming down and slow activity.

U.S. onshore natural gas rigs this year are forecast to average 117 across the most prolific gas formations, the Haynesville Shale and Appalachian Basin, according to TPH modeling.

Baker Hughes Co.’s U.S. natural gas rig count for the week ending Jan. 6 fell by four from a week earlier to 152. The Haynesville by itself posted a three-rig decline week/week.

FCF, commodity price swings and weather aside, E&Ps and oilfield services companies are facing some of the same issues they’ve felt for years. Labor is one.

“Automation cannot drill wells, move rigs and build locations,” an E&P executive said in a survey conducted in December by the Federal Reserve Bank of Dallas. “The government can remove all regulations and timetables, and the amount of increase in activity would not be affected by more than 10%.”

Employment issues are a “significant obstacle to growth,” another executive said. “We cannot hire the talent we need. Our competitors’ employment packages are so good at attracting talent that offers have evolved to a level I have never seen in the 40 years I’ve been in the business.”

What may not cause heartburn this year are regulatory issues. Following November’s midterm elections, Congress now is split, with Democrats controlling the Senate and Republicans, the House.

However, “the uncertainty of China (Covid-19) and Russia (Ukraine) is creating a great deal of demand uncertainty,” an energy executive said. “Ultimately, global demand for fossil fuels will likely outstrip available supply due to nearly eight years of underinvestment, combined with still-constrained capital availability to the industry.

“The only question is when this violent swing to undersupply will occur. Previously, I thought it could happen by the end of 2022. Today, it seems more likely in the second half of 2023.”