Many of the largest oil and natural gas producers in the Gulf of Mexico (GOM) were on high alert Wednesday, evacuating personnel and preparing to shut in more than a dozen offshore facilities ahead of a tropical disturbance that some forecasters predict will become a hurricane by week’s end.

Many of the largest oil and natural gas producers in the Gulf of Mexico (GOM) were on high alert Wednesday, evacuating personnel and preparing to shut in more than a dozen offshore facilities ahead of a tropical disturbance that some forecasters predict will become a hurricane by week’s end. 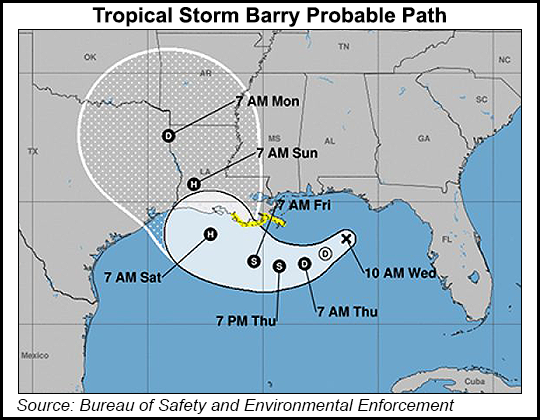 Based on data from offshore operator reports submitted as of 11:30 CT Wednesday, around 17.85% of the natural gas production, or 496.2 MMcf/d in the GOM has been shut-in, according to the Interior Department’s Bureau of Safety and Environmental Enforcement (BSEE). There also was about 31.89% of the current oil production shut-in, which equates to 602,715 b/d.

Personnel had been evacuated from a total of 15 production platforms, or 2.24% of the 669 manned platforms, BSEE said. Unlike drilling rigs, which typically move from location to location, production facilities remain in the same location throughout a project’s duration.

Personnel also had been evacuated from four rigs (non-dynamically positioned, or DP rigs), equivalent to 19.05% of the 21 in operation. Rigs include jackups, platforms, all submersibles and moored semisubmersibles.

“Three DP rigs have moved off location out of the storm’s path as a precaution,” BSEE noted, representing 15% of the 20 in operation.

The National Hurricane Center (NHC) in a 2 p.m. ET advisory Wednesday said maximum sustained winds were near 30 mph with higher gusts. Strengthening was forecast over the next 72 hours and “the disturbance is forecast to become a tropical depression Thursday morning, a tropical storm Thursday night, and a hurricane on Friday.” The named storm would be Barry.

The disturbance in the early afternoon Wednesday was centered near latitude 28.3 N, longitude 86.7 W, and it was moving toward the west-southwest near 8 mph.

NHC forecasters predicted the system would produce total rain accumulations of six-to-12 inches near and inland of the central Gulf Coast through early next week, with isolated maximum rainfall amounts of 18 inches.

GOM oil and gas operators were responding. In an update Wednesday afternoon, Royal Dutch Shell plc spokesperson Cynthia Babski said “production has been curtailed as a precautionary measure, but still minimal impact and non-material to Shell.”

Shell had evacuated nonessential personnel in the eastern GOM southeast of New Orleans “on seven platforms as a direct result of the storm,” Babski said. Platforms evacuated were Appomatox, Augur, Enchilada, Mars, Olympus Salsa and Ursa. “We do not anticipate any more platforms to have reduced staff as a result of the storm.”

In addition, staff were being evacuated from the BP plc-operated Na Kika platform southeast of New Orleans and partially owned by Shell, which had maintenance activities underway.

The efforts were precautionary to secure drilling operations and personnel. However, most of Shell’s oil and gas production as of early Wednesday was expected to remain close to production levels ahead of the storm.

Production output was reduced, however, at the Mars and Olympus platforms for safety reasons, with about 700 boe/d reduced from Mars and 1,835 boe/d at Olympus.

“At this time, we anticipate minimal impacts to production as a result of this weather disturbance and will continue to monitor weather reports, taking further action if necessary,” a Shell spokesperson said.

In addition the Na Kika platform, BP was evacuating and shutting in production from its massive platforms Thunder Horse, Atlantis and Mad Dog.

“Once this process is complete, BP will continue to monitor offshore conditions to determine when conditions are safe to redeploy personnel and resume operations,” BP stated. “We cannot yet predict when that will be. The safety of our personnel and contractors will remain BP’s highest priority.”

A Chevron Corp. spokesperson said five operated GOM platforms had been shut in as of Wednesday morning: Big Foot, Blind Faith, Genesis, Petronius and Tahiti. The supermajor also had begun to evacuate all associated personnel.

“Some nonessential personnel will be evacuated from our Jack St. Malo facility, but production at that asset remains at normal levels,” spokesperson Veronica Flores-Paniagua told NGI. “At our onshore facilities, we are following our storm preparedness procedures and paying close attention to the forecast and track of the system.”

ExxonMobil was “closely monitoring the disturbance and continues to prepare for severe weather at offshore and coastal operations in the Gulf of Mexico,” spokesperson Julie L. King said. “Our primary focus is the safety of our employees and contractors and communities in the affected areas. We are reaching out to our employees and their families to ensure they remain safe.

“In our upstream operation, we evacuated nonessential personnel from three platforms in the Gulf of Mexico, including Lena, which is in decommissioning, and are transferring our Mobile Bay operational control onshore,” King said.

The Lena platform is about 110 miles southeast of New Orleans. Mobile Bay is a natural gas plant on the Alabama coast in Mobile.

“We are prepared to safely evacuate remaining personnel from offshore facilities as needed, and will continue to adjust operations,” King said. “There is minimal impact to ExxonMobil-operated production.” In the downstream, Gulf Coast refineries “are currently operating as normal.”

“These platforms will remain shut in until the weather has cleared and it is safe to return staff,” Anadarko noted.