U.S. oil and gas permitting on federal lands jumped 8% in September from August, with Texas operators posting the largest increase since March, according to a monthly tally by Evercore ISI. 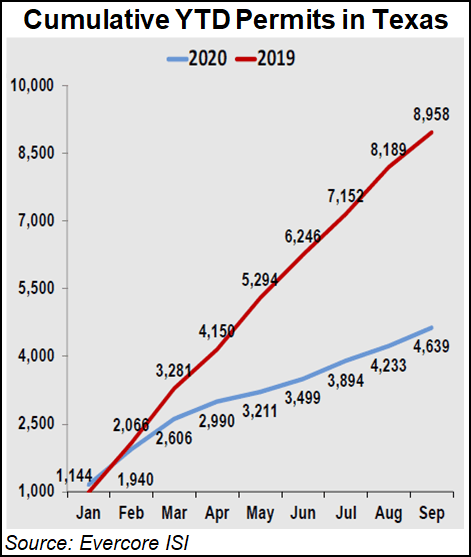 The firm every month compiles permit data from federal and state sources, which provides a bird’s eye view of where drilling by exploration and production (E&P) companies may be headed in the months ahead.

The state added 67 permits month/month (m/m), mostly in the Railroad Commission of Texas (RRC) District 8 office in Midland, in the heart of the Permian Basin, and in District 2 in San Antonio within the Eagle Ford Shale.

Of the 200 permitted wells in Texas District 8, 9% were filed by Pioneer Natural Resources Co., while EOG Resources Inc. accounted for 5% and Cimarex Energy Co. (XEC) accounted for 3%.

“Plans to drill in the district were propelled also by ConocoPhillips,” which added two permits m/m, and Chevron Corp., up five from August.

“Incremental permit activity was reported in Colorado, up 21 m/m,” attributed to PDC Energy Inc.’s “robust permit count of 32,” or 100% more than in August and representing 25% of the state’s permits.

“EOG and XEC ramped permitting in New Mexico,” while WPX Energy Inc. elevated its permit count in North Dakota by five permits m/m, “where these companies have federal land exposure and could be impacted by amendments to drilling permits from a potential Biden administration.”

Year-to-date, permits to drill in oil formations remain down by 68% from a year ago at 13,355, which Evercore attributed to a “sharp contraction in Wyoming,” off 97%.

The dropoff in Wyoming was related to an increase in drilling applications during 2019 to start up a 5,000-well joint development program developed by Chesapeake Energy Inc., EOG and Occidental Petroleum Corp.

“The project aims to drill 500 wells annually, covering 1.5 million acres in the Powder River Basin, where these companies have filed 222 permits year-to-date, down 92% year/year.

Meanwhile, E&P permitting by the privates has “continued to whither in Pennsylvania,” Evercore noted.

In the natural gas formations, permitted wells contracted to 111 in September, down 42 from August, primarily because of lower activity in the Haynesville Shale in North Louisiana, off by 41 m/m, and in Pennsylvania, down by five.

In North Louisiana, private E&Ps “cut their permit count to 33,” down by 48 from August. Pennsylvania, meanwhile, “was recently impacted by amendments to drilling permit fees that took effect on Aug. 1,” analysts noted.

“Under the new regulation, permit fees are 150% higher,” which led Appalachian gas heavyweights to reduce their drilling requests, including EQT Corp., with 22 fewer permits than in August, CNX Resources Corp., down by seven, and Southwestern Energy Corp., down by five.

An uptick in New Mexico P&A wells to 44 (up by five m/m) was mainly attributable to BP plc, with six more requests than in August, partially offset by one less permit request from Chevron.

Haynesville operators accelerated P&A activity to 110, up by 64 from August. However, Wyoming P&A well permits fell to three, down by 18 and all by private E&Ps.

“Bakken operators were issued 47 permits (up 22 m/m), the highest permit count for these wells given the strong activity by Hess Corp.” which requested 13 more permits m/m.

For injection wells, drilling plans trended down in the Permian last month at 11, off by 22 m/m. Permits were flat at four in the Denver-Julesburg Basin/Niobrara formation, while wells permitted in the Bakken decreased to two, down by half m/m.  Marcellus Shale injection well requests “reported a cease in permit activity,” down from 41 in August.