Producers and analysts are cautiously — but increasingly — optimistic about the outlook for natural gas prices amid Lower 48 output declines, curtailed oil investments and idled rigs. 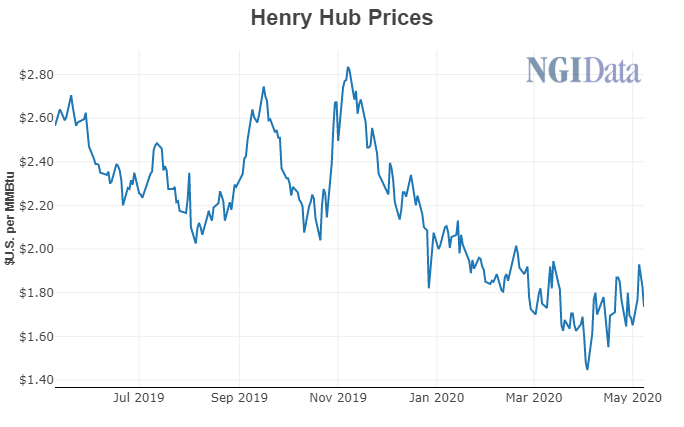 The actions are reducing the supply of associated gas from oil wells ahead of expected increases in demand as states lift stay-at-home orders and more Americans go back to work.

The U.S. Energy Information Administration (EIA) said that as of mid-May, exploration and production (E&P) companies were operating the fewest oil and natural gas rigs on record in the United States at 339, according to Baker Hughes Co. data dating to 1987. Most of the decline was concentrated in oil-focused plays, but gas-focused plays also fell.

“Gas producers are touting the macro impact of curtailments and associated gas supply declines, which should set up for a better price environment” for E&Ps in 2021, said U.S. Capital Advisors analyst Becca Followill.

EQT Corp. CEO Toby Rice, who runs the largest natural gas producer in the nation, also said during the quarterly earnings call that he foresees the year ending on a strong note for gas.

“On the supply side, we are now beginning to see the impact of declining oil and liquids prices, reducing associated gas output and building condensate and liquids inventory, resulting in associated gas supply being shut-in,” Rice said.

“The estimates for the supply impact range from 3-8 Bcf/d, and this can balance the market fairly quickly and sets up for a strong fourth quarter 2020 and calendar year ’21 and beyond.”

EQT also has temporarily curtailed 1.4 Bcf/d in Ohio and Pennsylvania.

Futures coincidentally climbed following the EQT news, with the June New York Mercantile Exchange gas futures contract settling at $1.830 on Tuesday, up 15% from the start of March, before the pandemic took hold.

“The EQT cut is particularly noteworthy because the Appalachia is non-associated gas,” said NGI’s Patrick Rau, director of strategy and research. Before the shut-ins, “the gas price rally had been led by the rapid decline in crude oil prices, which in turn has forced significant crude oil curtailments that have slowed the growth of associated gas.”

EIA, in its widely scrutinized Drilling Productivity Report (DPR) issued on Monday, said that it expects oil production levels in June to decline in every major Lower 48 basin except Appalachia, which is mostly gas.

Natural gas production is expected to decline in June in each of the plays, with total production falling to 81.47 Bcf/d from 82.25 bcf/d in May, according to the DPR.

To be sure, the price recovery is expected to be gradual. Global natural gas demand is on track to fall 5% this year, largely because of the coronavirus-imposed economic contraction, according to the global energy watchdog, the International Energy Agency (IEA). The expected drop would be a record and end 10 years of uninterrupted growth.

The power generation and industrial sectors are expected to account for 60% and 25% of the total decrease in gas demand, respectively, as companies within those sectors shut down or dramatically scaled back operations amid stay-at-home orders across much of the world, notably including in the United States.

However, demand is expected to come back as social distancing restrictions are lifted and more companies build back-up staff and operations. Winter weather later in 2020 and early 2021 would also factor into demand, according to the IEA.

“It’s been a rollercoaster, but the price outlook has really improved from just a few weeks ago,” said Executive Director Chelsie Miera of the West Slope Colorado Oil & Gas Association. “It is cautious optimism but definitely optimism for the future,” she told NGI’s Shale Daily.

There are several potential impediments that could serve as price caps over the next few months, absent any extreme weather or further supply cuts on par with EQT’s actions to shut-in gas temporarily. One has to do with liquefied natural gas (LNG) exports from Lower 48 ports, said Rau.

“For one, Henry Hub prices are now the most expensive in the world, rendering U.S. LNG cargoes largely uneconomic through September-October,” he said. “That is choking off U.S. LNG demand, and LNG exports have been the incremental source of U.S. natural gas demand growth in recent quarters.”

“So a large amount of gas can come back online relatively easily, despite the decline in rigs,” Rau said. And “several prominent gas-weighted producers indicated they would likely step up drilling activity if they were convinced gas prices were sustainable at $2.75/Mcf or higher. If that were to happen, a wave of new production could follow on the heels of a drawdown in DUCs, thus preserving production past 2020.”

Perhaps more worrisome for the continued upside momentum in gas prices, Rau and other analysts said, is the recent West Texas Intermediate (WTI) crude oil rally, which has pushed the prompt month from negative territory on April 20 to more than $33/bbl this week. The overall mid-cycle breakeven WTI price for U.S. oil producers is somewhere in the $50 range, Rau said, but breakevens in the Permian Basin are typically lower, and in many cases, output is economic when WTI is above $30.

“Many Permian producers should be able to cover their variable production costs at that price, so if $30-plus WTI prices hold, I’d expect to see a fair amount of curtailed and shut-in Permian production come with it,” Rau said. And since the Permian is the fastest-growing crude basin in the Lower 48, it is the main contributor to associated gas production growth. Increased Permian crude production is bad for gas prices, everything else being equal.”

Heavy debt loads, particularly in the E&P sector, worry investors. NGI estimates that 60% of U.S. natural gas produced by publicly traded E&P companies is from entities that are noninvestment grade. Even before the pandemic, overleveraged companies were under pressure to reduce debt and to focus on generating positive free cash flow. The downturn adds urgency.

“There are many companies that can weather this, but we are going to see bankruptcies and probably emergency sales,” Samco Capital Markets’ Jacob Thompson, managing director of investment banking, told NGI’s Shale Daily.

Also issuing a warning is Midcontinent pure-play Chaparral Energy Inc., which said it is in financial jeopardy for the second time in four years. CEO Charles Duginski said during the first quarter earnings call that the Oklahoma City-based company is exploring “strategic alternatives,” a phrase often used to warn about potential asset sales, mergers or the ability to continue as a going concern.

“Holding too much debt is never ideal,” Rau said, but it is especially problematic now and could remain so, “considering there is still a great deal of uncertainty in what the oil and gas industry will look like on the other side of the Covid crisis.”

That, along with the abundance of supply heading into the downturn, helps explain why oil and gas companies of all stripes are pulling back fast on capital expenditures and cutting expenses wherever they can.

At least for now, the pullbacks are helping to brighten the pricing picture and free up cash flow to bridge the gulf to recovery.

“It’s not all end-of-the-world destruction out there,” Thompson said.