The Environmental Protection Agency (EPA) is considering adding two Texas counties — Wise and Hood — overlying the Barnett Shale in North Texas to the Dallas-Fort Worth (DFW) nonattainment area, which has failed to meet federal standards for ozone. Gas drilling activities in the region are thought by EPA to be contributing to the ground-level ozone, or smog, problem.

The changes would be part of the agency’s revised 2008 National Ambient Air Quality Standards for ozone throughout Texas. Nitrogen oxides (NOx) and volatile organic compounds (VOC) are the smog culprits being targeted.

In a letter to Gov. Rick Perry last week, EPA said it intends to keep the DFW-area counties of Collin, Dallas, Denton, Ellis, Johnson, Kaufman, Parker, Rockwall and Tarrant designated as nonattainment. “At this phase in the process, in addition to these counties, we intend to designate Hood and Wise counties as nonattainment,” EPA said in its letter dated last Friday. Wise is north of Parker and west of Denton; Hood is south of Parker and west of Johnson.

The agency said its decision to add the two counties was based partly on emissions from Barnett Shale operations. The state has until the end of February to respond with additional information it wants EPA to consider in its decision-making.

“These proposed decisions are based on air quality monitoring data, recommendations submitted by the states and tribes, and other technical information,” the agency said. “EPA will work closely with states and tribes throughout this process using a routine and common sense approach that improves air quality, maximizes flexibilities and minimizes burden on state and local governments as they strive to meet these long-standing standards.”

The environmental group Downwinders At Risk said on its website that the move by EPA is good news and overdue.

“Wise County is where the pollution from DFW often goes during ‘ozone season’ when south-by-southeast winds blow everything north by northwest,” Downwinders said. “TCEQ [Texas Commission on Environmental Quality] has been avoiding putting any ozone monitors in Wise County for fear of the high levels of ozone pollution they might find there, which would make DFW air quality look even worse that it already is.

“Wise County is also the birthplace of ‘horizontal fracking’ of gas, hosts countless wells, compressors, pipelines and a huge processing facility in Bridgeport. These emissions, along with the commuter travel from Wise to the rest of DFW, and the fact that the county is already part of the regional transportation authority, are all reasons why it’s being included in this latest designation. Hood County’s gas drilling and commuter travel is primarily responsible for its inclusion, although it hosts some power plants as well.”

Emissions of VOCs from gas drilling sites and facilities in the area has been a concern to residents for some time and a point of contention among residents, regulators and industry interests.

“…[T]he DFW ozone nonattainment problem is not VOC-driven,” said Ed Ireland, director of the Barnett Shale Energy Education Council (BSEEC). “TCEQ has stated that there is more than enough biogenic VOC in this area to drive the ozone process. Cutting all VOCs from all point sources would do nothing to improve our ozone situation. Ozone reductions in the DFW area will be tied to Nox reductions and Nox comes from cars, trucks, trains and airplanes. Converting fleets to compressed natural gas would greatly improve our ozone situation.”

Downwinders said this would be the first time that EPA has added counties to the North Texas nonattainment area because of “gas industry pollution.” The added counties would join the others to be included in the air quality planning process to determine the next clean air plan for DFW. This plan would target the new 75 parts per billion (ppb) federal ozone standard announced in September, Downwinders said.

“No start date for that process yet, but the final plan for DFW to reach 75 ppb must be submitted by 2015 or so, which means we may see the machinery gearing up after next year’s presidential election,” the group said. 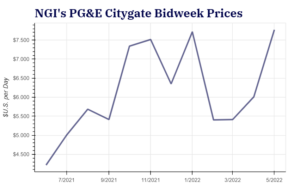 Escalating supply concerns ahead of the summer – forecast to be hotter than usual – appear to be driving huge increases for June baseload natural gas prices, according to NGI’s Bidweek Alert (BWA). After late-season blasts of wintry air hampered production in April, producers are struggling to grow output beyond the recent low to mid-90…