The Environmental Protection Agency (EPA) proposed Thursday to loosen Obama-era methane emission standards for the oil and gas industry, saying the changes “would remove regulatory duplication and save the industry millions of dollars in compliance costs each year — while maintaining health and environmental regulations…” 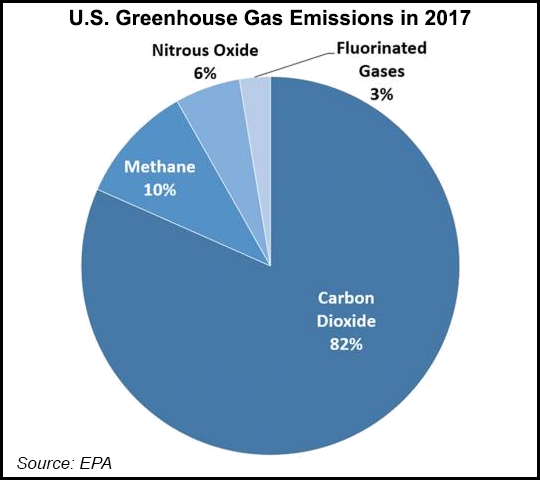 According to EPA, the proposals would save the oil and natural gas industry an estimated $17-19 million annually. The proposed changes are a result of EPA’s review of the 2016 New Source Performance Standards (NSPS), which was conducted in response to President Trump’s executive order 13783.

“The Trump administration recognizes that methane is valuable, and the industry has an incentive to minimize leaks and maximize its use,” said EPA Administrator Andrew Wheeler. “Since 1990, natural gas production in the United States has almost doubled, while methane emissions across the natural gas industry have fallen by nearly 15%. Our regulations should not stifle this innovation and progress.”

In its primary proposal, EPA would remove compressor stations, pneumatic controllers, underground storage vessels and other sources in the transmission and storage segment of the oil and natural gas industry from regulation.

“The agency is proposing that the addition of these sources to the 2016 rule was not appropriate…the agency did not make a separate finding to determine that the emissions from the transmission and storage segment of the industry causes or significantly contributes to air pollution that may endanger public health or welfare,” EPA said.

The proposal would also rescind emissions limits for methane, from the production and processing segments of the industry, but would keep emissions limits from ozone-forming volatile organic compounds (VOC). Those sources include well completions, pneumatic pumps, pneumatic controllers, gathering and boosting compressors, natural gas processing plants and storage tanks.

A second, alternative proposal would rescind methane emissions limitations without removing from regulation any sources from the transmission and storage segment.

The proposals are in addition to a September 2018 technical action that proposed targeted improvements to help streamline implementation, reduce duplication of EPA and state requirements, and decrease unnecessary burdens on energy producers, EPA said.

Several industry groups were supportive of the EPA proposals.

The Independent Petroleum Association of America (IPAA) endorsed the changes “because it would be far more cost effective with regard to the breadth of emissions sources,” according to Lee Fuller, executive vice president. “IPAA has consistently believed and recommended that a VOC-based program is the appropriate pathway for regulating natural gas and oil production emissions.”

“We support EPA’s efforts to adhere to its statutory obligations under the Clean Air Act,” said API’s Erik Milito, vice president upstream and industry operations. “Under this proposal, the oil and natural gas sector will continue to be effectively regulated.”

In response to EPA’s proposal, Interfaith Center on Corporate Responsibility (ICCR), an investor group claiming to represent $5.5 trillion, called on oil and gas companies to voice their dissent.

“While several larger producers including Shell, BP, Exxon and Equinor have shown leadership both by making public statements endorsing federal methane regulations and by reducing their own emissions, industry performance is not uniform,” resulting in a fragmented market with mixed performance on emissions reductions, according to ICCR.

“Many companies have remained silent on the regulatory rollback, and in doing so tacitly support the API position, which is at odds with science and deepens the risks to the industry’s license to operate,” said ICCR’s Christina Herman. “We are indeed gratified to see responsible oil and gas companies recognize the importance of addressing this significant problem, but clearly more industry voices are needed to help make the business case.”

Royal Dutch Shell plc is one of several major U.S. producers that have pushed back against Trump administration changes to methane regulations.

“We believe sound environmental policies are foundational to the vital role natural gas can play in the energy transition and have made clear our support of the 2016 law to regulate methane from new and modified onshore sources,” Shell’s U.S. President Gretchen Watkins told the Washington Post. “Despite the administration’s proposal to no longer regulate methane, Shell’s U.S. assets will continue to contribute to that global target.”

INGAA members “have agreed to these voluntary commitments because reducing methane emissions is socially and environmentally responsible, and good business for natural gas transmission and storage companies,” Santa said. “Members of INGAA will stand by these commitments, maintain pipeline integrity and safe operations, and minimize impacts to customers and communities irrespective of any regulatory changes.”

“As EPA makes clear, this proposal is an attempt to dodge the agency’s legal duty to regulate existing sources in the oil and gas sector,” the Environmental Defense Fund said.

“This proposal is a blatant attempt to give oil and gas companies yet another free pass to release as much harmful air pollution as they want while the public pays the price,” said Sierra Club’s Michael Brune, executive director.

EPA’s proposal is the latest in a series of moves by the Trump administration to dismantle Obama-era regulations on emissions and pollution. Earlier this summer, EPA adopted a rule that shifts to states much of the responsibility for regulating carbon dioxide emissions from power plants, potentially opening a door to the increased burning of coal, while simultaneously rescinding the Obama-era Clean Power Plan. A coalition of 22 states and seven local governments has since filed a lawsuit against that plan.

Similarly, 10 environmental groups are suing the Trump administration for plans to roll back the Well Control and Blowout Preventer Rule, which was implemented in 2016 to prevent offshore tragedies similar to the Macondo blowout in 2010.

Energy related regulatory changes imposed by the Trump administration have had a tough time of it in court challenges.

In April, a federal judge struck down the administration’s repeal of an Obama-era rule that amended how the government calculates royalties for oil, natural gas and coal produced on public and tribal lands.

Earlier this year a judge ruled that the Bureau of Land Management did an inadequate job of considering the effects of climate change in authorizing lease sales and ordered a temporary halt to drilling on more than 300,000 acres in Wyoming.

A Colorado judge this year also ruled BLM violated the National Environmental Policy Act when it approved drilling on nearly 20,000 acres in the Piceance Basin. And a judge in Alaska ruled that a Trump executive order to open areas of the Arctic and Atlantic oceans to leasing was “unlawful and invalid.”

EPA will take comments on the methane proposal for 60 days after it is published in the Federal Register.