The Environmental Protection Agency (EPA) on Tuesday proposed amending Obama-era rules on oil and natural gas methane emissions, indicating the changes would reduce duplicative regulation with states and save the industry about $484 million in regulatory costs over seven years. 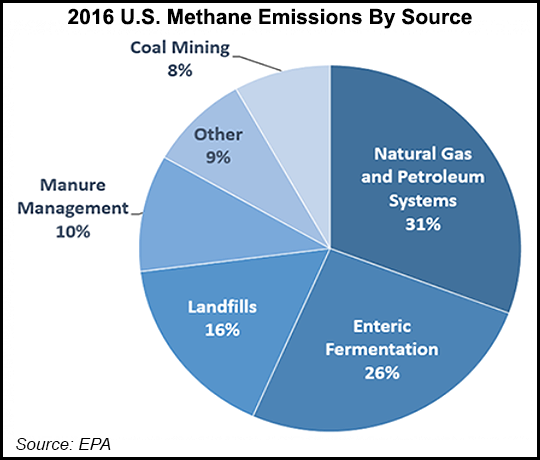 “These common-sense reforms will alleviate unnecessary and duplicative red tape and give the energy sector the regulatory certainty it needs to continue providing affordable and reliable energy to the American people,” said EPA Acting Administrator Andrew Wheeler.

EPA is taking comments on the proposed rule for 60 days following publication in the Federal Register. A public hearing also is planned in Denver, with details to follow.

The agency proposed allowing monitoring to cease once all major production and processing equipment is removed from a site, leaving only the wellhead. However, separate tank batteries receiving oil or natural gas produced from wellhead-only sites would still be considered modified and subject to fugitive emissions monitoring requirements.

Under the latest proposal, well owners or operators would have up to 60 days after fugitive emissions are detected to complete repairs, with a first attempt at repair required within the first 30 days. The 2016 rule requires repairs within 30 days of detection, as well as a re-survey within 30 days to verify that the repair was successful.

In improving its regulatory alignment with state programs, EPA said it had determined that California, Colorado, Ohio, Pennsylvania, Texas and Utah have, for well sites, fugitive emissions monitoring standards and repair and recordkeeping requirements that are comparable to the proposed rule. California, Colorado, Ohio and Pennsylvania also meet EPA standards for testing at compressor stations.

“Based on this evaluation, EPA is proposing to allow owners and operators to choose to base fugitive emissions monitoring and repair plans on requirements from [those] states, in lieu of the requirements in the NSPS,” the agency said.

EPA said it was also proposing to expand a technical infeasibility provision for pneumatic pumps that would include all well sites — not only greenfield sites. The 2016 rule required routing methane and volatile organic compound emissions unless it was not technically feasible to do so, but an exemption was allowed only for existing, well sites.

Owners and operators would be also allowed to apply to conduct surveys using emerging technologies.

The oil and gas industry applauded the news for reducing red tape.

The proposal “reverses the growing mistakes of the past,” said Independent Petroleum Association of America CEO Barry Russell. “It is important for the states to play an important role in decisions that affect their citizens, industries and natural resources. This proposal does just that: it empowers the states to work with the federal government on the best regulatory approaches.”

The move had been anticipated by producers as well. In a blog post last week, XTO Energy President Sara Ortwein said any potential changes to EPA’s methane rules wouldn’t affect parent company ExxonMobil Corp. because it was already committed to reducing emissions.

“Our view on methane regulation remains,” Ortwein wrote. “We think there should be a cost-effective federal regulatory standard to manage methane emissions for both new and existing source oil and gas facilities. Any such standard should follow the statutory requirements for rulemaking and clearly fall within the appropriate agency’s authority to do so.

Environmental groups condemned the proposal. “It is not surprising that this administration chose to ignore the calls of hundreds of thousands of Americans and listen instead to their fossil fuel industry friends, but that still doesn’t comfort the communities across the country that will now breathe dirtier air,” said Sierra Club Executive Director Michael Brune.

EPA first unveiled the NSPS in May 2016 during the Obama administration. Upon taking office, President Trump issued an executive order calling for EPA to reconsider the rule, among other things. The agency issued a 90-day administrative stay of the rules in May 2017, but a three-judge panel of the U.S. Court of Appeals for the District of Columbia removed the stay two months later, prompting EPA to take the unusual step of asking the court to recall its mandate, thereby giving the agency more time to weigh its options. The full court rejected a request by the oil and gas industry to reconsider lifting the stay in August 2017.