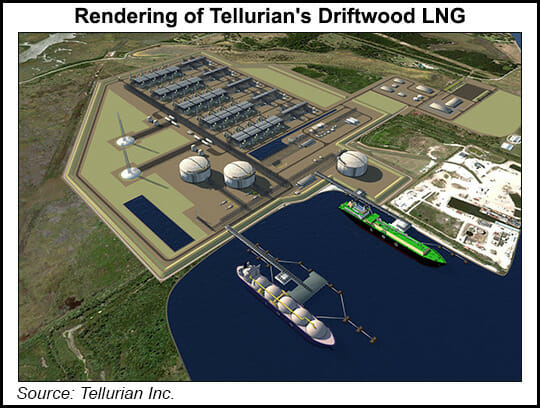 In the petition filed last week, the Sierra Club argued that the company’s permit for the 27 million metric ton/year (mmty) liquefaction and export terminal proposed south of Lake Charles, LA should be rejected because of critical flaws in its application.

The group’s lawyers took their argument a step further by accusing the Louisiana Department of Environmental Quality (LDEQ) of not meeting Clean Air Act (CAA) requirements, signing off on “incorrect” modeling and improperly granting an extension during the process of applying for a Significant Deterioration Permit.

Title V is a federal program defined in the CAA to standardize air quality permits and the permitting process for major sources of air emissions.

The full-scope plans of Driftwood LNG call for the eventual construction of five liquefaction trains, three LNG storage tanks, a marine terminal and about 96 miles of pipeline.

The project made a critical step forward in 2019 with authorization for construction from the Federal Energy Regulatory Commission, but Tellurian hasn’t made a Final Investment Decision.
Instead, it’s been focusing on securing contracts for its LNG capacity, netting three sale and purchase agreements (SPAs) in 2021.

When Tellurian announced an SPA in July 2021 with Royal Dutch Shell plc to supply 3 million mmty, executives said the company had secured enough sales to support the financing of Driftwood’s first two plants.

Tellurian CEO Octávio Simões told NGI in November that the company was still on a timeline to secure funding and could provide Bechtel Corp. with a notice to begin construction on the 11 mmty first phase of Driftwood by March of this year.

Environmental groups such as the Sierra Club have been stepping up challenges to LNG terminals proposed across the Gulf Coast on state and federal regulatory levels after previously losing challenges to projects like Freeport LNG and Sabine Pass LNG.

The U.S. Court of Appeals for the District of Columbia Circuit ordered FERC in August 2021 to review approvals previously granted for two South Texas projects, Rio Grande LNG and Texas LNG, agreeing with opponents that the Commission’s reviews weren’t sufficient.

Fossil fuel advocates have started the year with a major push to counter growing opposition to facilities, pipelines and natural gas in general by lobbying for policies that would secure the future of U.S. LNG exports and investments, arguing that the country’s natural gas is needed to help other countries meet carbon reduction targets.