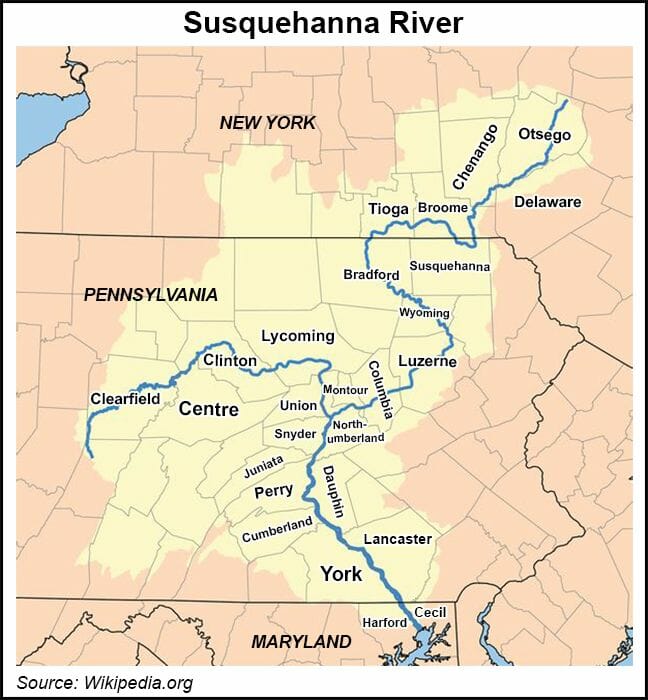 The EPA said Friday it had approved a list of 7,009 impaired waterways submitted by the DEP for the 2012 calendar year. Under the federal Clean Water Act, states are required to analyze the water quality of their waterways and submit a list of impaired ones every two years to the EPA for review and approval. The states or the EPA are then required to develop cleanup plans for the impaired waterways.

DEP spokesman Kevin Sunday told NGI’s Shale Daily that environmental groups and another state agency, the Pennsylvania Fish and Boat Commission (PFBC), had also wanted the DEP to list a 98-mile section of the Susquehanna — from Sunbury in Northumberland County to the Holtwood Dam in Lancaster and York counties — as impaired.

“They wanted us to impair it for dissolved oxygen and pH based on three sample points at two sites,” Sunday said. “That is not sufficient data to impair that much of the water. That section of the river has been listed as unimpaired, and we believe it continues to be unimpaired. We don’t disagree that there are problems with the bass, but we have to make these water quality impairment designations based on water quality. The data that we have doesn’t support that listing.”

Sunday added that “there’s not any indication that shale development has any impact on any of these impairments or the issues with the bass.”

The Susquehanna River Basin Commission (SRBC) manages water withdrawal requests in the basin, most of which have come from operators in the Marcellus Shale (see Shale Daily, Nov. 28, 2012). According to the SRBC, as of April 30 there have been, to date, 380 requests for water withdrawals — 362 for surface water and 18 for groundwater. Of those requests, 266 have been approved and permits were issued (256 surface water, 10 groundwater), while an additional 38 requests are pending.

SRBC spokeswoman Susan Obleski told NGI’s Shale Daily that the issue with the smallmouth bass pre-dates Marcellus Shale development. She also said she doubted Marcellus Shale operators would be affected if the 98-mile section of the Susquehanna at issue were listed as impaired.

“Most of the withdrawal permits are from the northern Susquehanna, not in the lower part, and very few are even on the main stem of the Susquehanna in the northern part,” Obleski said Monday. “They’re mostly from the tributaries and in the northern, north central and northeast parts of the basin. While the smallmouth bass issue is not exclusive to the lower main stem, that’s the main point of interest.”

The EPA concurred with the DEP’s assessment of the river.

“Although we share the continuing concerns about the health of the smallmouth bass population, we do not have sufficient data at this time to scientifically support listing the main stem of the Susquehanna as impaired,” EPA spokesman David Sternberg told NGI’s Shale Daily. “We support the continuing studies being conducted by the Commonwealth to determine both the cause of the declining health of the smallmouth bass population, and to make a determination as to whether or not the main stem of the Susquehanna is impaired.”

The DEP added 263 new waterways to the impaired list, including portions of Buffalo Creek and Plum Creek in the Upper Juniata watershed. It also added more than 650 stream miles within the Susquehanna River Basin. But state regulators removed 39 waterways from the list, including more than 96 miles in the Upper Susquehanna-Lackawanna Basin and 27 miles of the Lehigh River.

PFBC Executive Director John Arway said Friday he was disappointed with the EPA’s decision. “The EPA’s endorsement of the DEP report is extremely disappointing since it delays action on beginning to develop a cleanup plan for the Susquehanna River for at least another two years. We continue to believe that ample scientific evidence exists to demonstrate that the river is sick and needs help sooner than later.”

Earlier this month, the SRBC said it would conduct a multi-year water quantity study in the basin (see Shale Daily, May 10).