The Environmental Protection Agency (EPA) said in comments filed with FERC on Monday that the draft environmental impact statement (DEIS) for Columbia Pipeline Group Inc.’s Leach and Rayne XPress pipeline projects is insufficient, recommending that additional information be included in the final version. 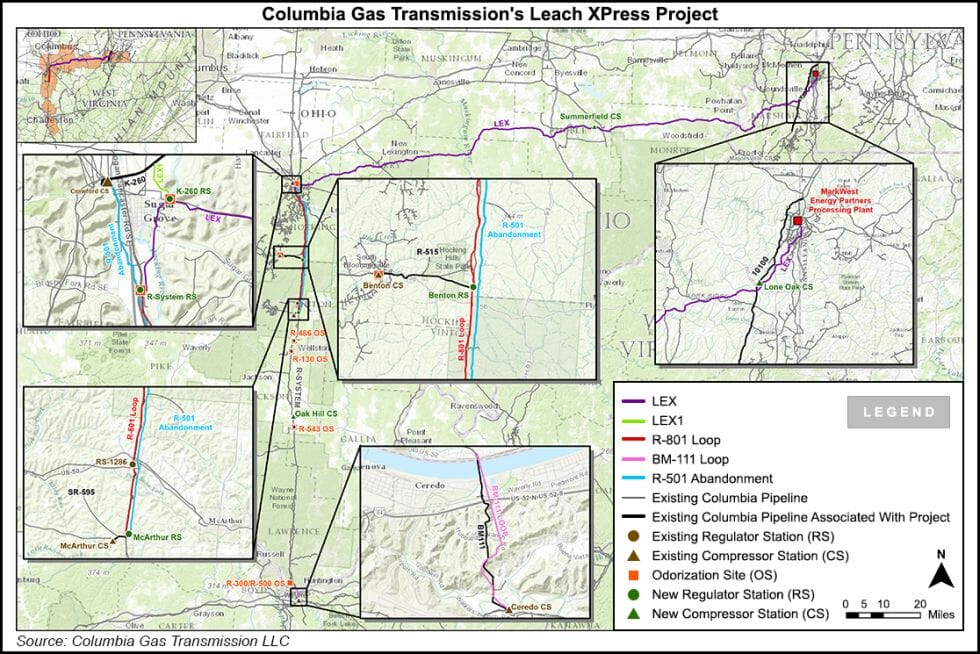 EPA consolidated comments from regional offices in Chicago, Philadelphia and Atlanta, which oversee states that would be affected by the expansion projects, after a review under its responsibility for implementing the National Environmental Policy Act.

The DEIS, EPA said, was a “limited analysis” of the projects’ potential impacts. The agency rated the document an “EC-2 Environmental Concerns,” indicating that it does not contain enough information to fully assess the environmental impacts that should be avoided.

“EPA has identified several potential reasonably available alternatives which might reduce the environmental impacts of the action,” EPA wrote to FERC on Monday.

The projects were announced in 2014 (see Daily GPI, Aug. 12, 2014). A year ago, Columbia Gas Transmission LLC (TCO) applied for a certificate for the Leach XPress, which would add 160 miles of pipeline and more compression in West Virginia, Ohio and Pennsylvania to move up to 1.53 million Dth/d to better markets outside of Appalachia.

Shortly after, Columbia Gulf Transmission LLC filed for the Rayne XPress, which is designed to expand the capacity of Columbia Gulf’s existing mainline to transport another 621,000 Dth/d of Appalachian gas to the Gulf Coast.

After it split from NiSource Inc. into a separately traded public company last year, Columbia detailed more than a dozen liquified natural gas, midstream and interstate pipeline expansion/newbuild projects that it said would cost more than $10 billion over the next five years (see Shale Daily, May 15, 2015). Most of those, management said at the time, would be completed in the Appalachian Basin. Since then, TransCanada Corp. has agreed to buy the company for $13 billion (see Daily GPI, March 17).

EPA noted some of those other pipeline projects that are under review in the region, including the Mountaineer XPress pipeline, which would provide 2.7 Bcf/d of firm transportation service from the Marcellus and Utica shales in West Virginia to markets on the TCO system. Given Mountaineer, the agency said just 26 miles of pipeline would need to be constructed instead of building the Leach XPress to expand capacity.

“It is unclear why or if the applicant dismissed this alternative as unviable,” EPA said in its comments. “All viable alternatives should be evaluated, particularly if there is the potential to drastically reduce the combined adverse impacts of [Mountaineer and Leach].”

EPA said its concerns were primarily related to insufficient information regarding alternatives; avoidance of impacts to streams and wetlands; impacts to forests; noise impacts near residential areas; greenhouse gas emissions, and climate change. The agency said the DEIS failed to include wetland and forest mitigation plans and emergency response plans, recommending that such information be included in the final EIS.

FERC issued the DEIS in April, finding that Leach XPress would pose the most environmental issues, but it said those could be minimized with mitigation plans.