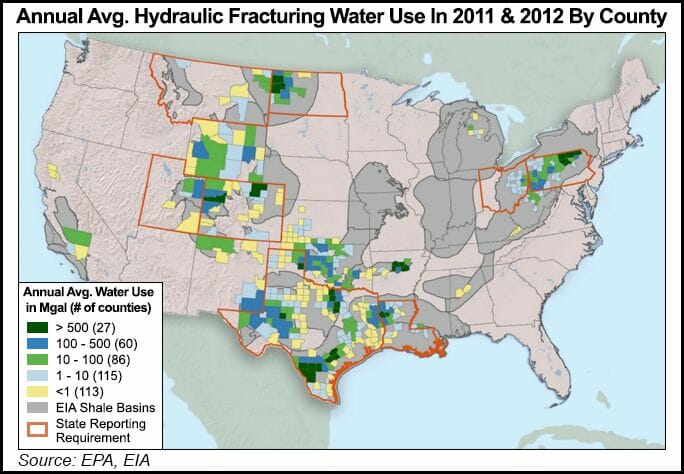 The 998-page draft assessment “shows that while hydraulic fracturing activities in the U.S. are carried out in a way that have not led to widespread, systemic impacts on drinking water resources, there are potential vulnerabilities in the water lifecycle that could impact drinking water,” EPA said.

“Today’s study confirms what we already know,” said Sen. Lisa Murkowski (R-AK), who chairs the Senate Energy and Natural Resources Committee and is a vocal opponent of federal regulation of fracking. “Hydraulic fracturing, when done to industry standards, does not impact drinking water. States have been effectively regulating hydraulic fracturing for more than 40 years, and this study is evidence of that.”

EPA’s assessment followed water used for fracking from acquisition, chemical mixing at the well pad site, well injection of fracking fluids, the collection of fracking wastewater (including flowback and produced water), and wastewater treatment and disposal. The agency’s review of data sources “found specific instances where well integrity and wastewater management related to hydraulic fracturing activities impacted drinking water resources, but they were small compared to the large number of hydraulically fractured wells across the country,” EPA said.

The “potential vulnerabilities,” some not unique to fracking, include:

“EPA’s draft assessment will give state regulators, tribes and local communities and industry around the country a critical resource to identify how best to protect public health and their drinking water resources,” said Dr. Thomas A. Burke, EPA science adviser and deputy assistant administrator of EPA’s Office of Research and Development. “It is the most complete compilation of scientific data to date, including over 950 sources of information, published papers, numerous technical reports, information from stakeholders and peer-reviewed EPA scientific reports.”

EPA also released nine of the reports that are part of its overall compilation and contributed to findings outlined in the draft assessment. Over 20 peer-reviewed articles or reports were published as part of this study.

The study will be finalized after review by the Science Advisory Board and public review and comment. A Federal Register notice was scheduled to be published Friday.

“Upon initial review, the EPA fracking study does not appear likely to spur additional federal water regulation beyond initiatives that are already in process,” ClearView said in a note Thursday. “We would contrast today’s release with last December’s study by the New York Department of Environmental Conservation that found “many negative health effects” associated with fracking [see Shale Daily, Dec. 17, 2014] — a possible catalyst for future local and state regulatory actions.”

Energy industry proponents appeared unanimous in their assessment of the EPA study.

“Today’s draft study affirms that hydraulic fracturing does not present systemic impacts on drinking water,” said Marty Durbin, CEO of America’s Natural Gas Alliance. “Our industry is committed to continuous improvement as evidenced by advances in a host of technologies, such as water recycling and use of non-potable water.”

“The study confirms what years of research and sound science have told us: hydraulic fracturing is a proven technique being utilized safely and effectively across the country, and its use as a well stimulation technique has effectively turned the United States into the world’s leading energy producer,” said Rep. Robert Latta (R-OH) of the House Energy and Commerce Committee. “The continued development of our natural resources in various formations across the country has been a driving force in our economy, and moved America towards the energy security that has been the goal of every administration since President Nixon. This study further mitigates any concerns about hydraulic fracturing’s potential impacts to groundwater, and will allow us to continue development under the robust regulatory oversight of the developing states.”

“After more than five years and millions of dollars, the evidence gathered by EPA confirms what the agency has already acknowledged and what the oil and gas industry has known,” said the American Petroleum Institute’s Erik Milito. “Hydraulic fracturing is being done safely under the strong environmental stewardship of state regulators and industry best practices.

“Continuous safety improvements have been an ongoing part of hydraulic fracturing for 65 years. That process will continue, with our support, under the oversight of state regulators who are most familiar with their own area’s unique geology, hydrology, and other physical characteristics.”

Oklahoma U.S. Sen. Jim Inhofe, chairman of the Senate Environment and Public Works Committee, said, “My state is home to FracFocus, a national chemical registry that has the endorsement of the  federal government. This program shows that states are in the best position to understand their unique geologies and to determine what regulations are necessary while also supporting economic opportunity for their communities. EPA’s report confirms what we have known for over 60 years when the process began in Duncan, Oklahoma — hydraulic fracturing is safe.”

“Texans have known for 60-plus years that hydraulic fracturing when well-regulated, is not only safe but critical to unleashing America’s true oil and gas production potential,” said Texas Railroad Commission Chairman Christi Craddick. “There is not one case on the books in Texas where hydraulic fracturing has caused groundwater pollution, and it’s my hope the EPA’s findings will contribute to a better public, fact-based understanding of this critical industry technique.”

But environmental groups had a different perspective on EPA’s study. According to Sierra Club Executive Director Michael Brune, the study confirmed that “dirty oil and gas fracking” contaminates drinking water.

“Unfortunately, the EPA chose to leave many critical questions unanswered,” Brune said. “For example, the study did not look at this issue under the lens of public health and ignored numerous threats that fracking poses to drinking water. The EPA must conduct a comprehensive study that results in action to protect public health. Instead of blindly allowing destructive fracking to continue in our communities, we should extend statewide fracking bans, like the one in New York, and moratoriums, like the one in Maryland [see Shale Daily, June 3], that will keep dirty, climate-polluting fossil fuels like fracked gas in the ground and invest in truly clean, renewable sources of energy that don’t come with the threat of poisoned drinking water and climate disaster.”

In a preliminary report issued earlier this year, EPA said chemical additives make up only a fraction of the fluids used in fracking operations, but fluid is used in such great volumes that the amount of chemicals still adds up to significant totals (see Shale Daily, March 31).

Last month, the Obama administration unveiled its long-awaited finalized Clean Water Rule (CWR), extending regulatory protection to smaller upstream rivers and creeks, but doing so against opposition from the oil and gas industry, manufacturers and their Republican allies in Congress (see Shale Daily, May 27). The CWR, which was created by EPA and the U.S. Army Corps of Engineers, clarifies the definition of what constitutes Waters of the United States and therefore what deserves protection under the Clean Water Act. The rule will take effect 60 days after its publication in the Federal Register.