Oil and natural gas activity accelerated across Texas, parts of Louisiana and New Mexico during the first three months of 2022, but as Russia’s invasion of Ukraine continued, energy executives said they don’t foresee commodity prices surging to the end of the year. 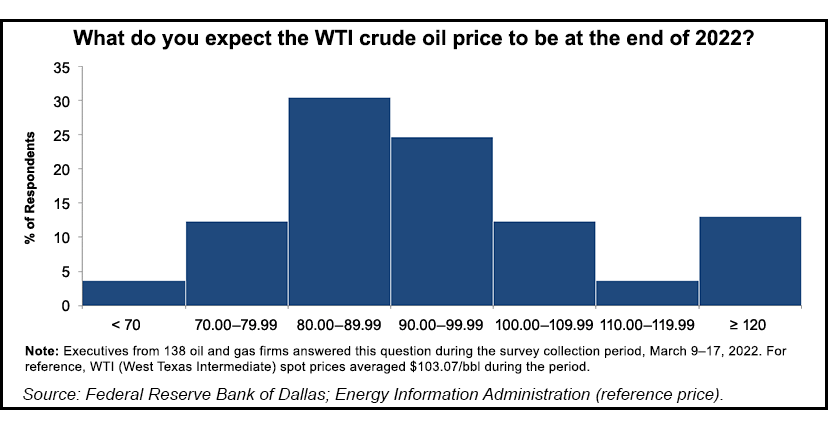 The first quarter survey of oilfield services (OFS) and exploration and production (E&P) executives is done by the Federal Reserve Bank of Dallas. The latest survey, conducted March 9-19, queried 91 E&P and 50 OFS executives who work in the Eleventh District, which encompasses northern Louisiana, southern New Mexico and Texas.

“The business activity index – the survey’s broadest measure of conditions facing Eleventh District energy firms –  jumped from 42.6 in the fourth quarter to 56, reaching its highest reading in the survey’s six-year history,” researchers noted.

Oil production increased at a faster pace than in the final quarter of 2021, said researchers at the Dallas Fed, as it is known. The oil production index rose sequentially to 45 from 19. Similarly, the natural gas production index advanced 14 points to 40.
“Costs increased for a fifth straight quarter,” researchers said. Among the OFS firms, the index for input costs increased sequentially to 77 from nearly 70 – a record high. Only one of the 50 responding OFS firms reported lower input costs for 1Q2022.

“Among E&P firms, the index for finding and development costs advanced” from 4Q2021 to 56 from almost 45. Lease operating expenses also increased, with the index climbing to nearly 59 from 42.

“Both indexes reached highs for the survey’s six-year history,” according to researchers.

The OFS executives reported improvement across all indicators. The equipment utilization index remained elevated, but it edged down sequentially to 50 from 51. The operating margin index advanced to 21 from close to 12. The index of prices received for services jumped to 53, a record high, from 30 in 4Q2021.

“All labor market indexes in the first quarter reached record highs, pointing to strong growth in employment, hours and wages,” according to the Dallas Fed. “The aggregate employment index posted a fifth consecutive positive reading and increased from 11.9 to 28. The aggregate employee hours index jumped from 18 to 36. The aggregate wages and benefits index also rose, from 36.6 to 54.”

Six-month outlooks also improved significantly from outlooks in 4Q2021, said researchers. The index climbed to 76 from 53, a record high. The outlook uncertainty index also jumped, moving to nearly 32 from minus 1.5, “suggesting uncertainty became much more pronounced this quarter.”

What Oil and Natural Gas Price Is Expected?

Per usual, Dallas Fed researchers asked a series of special questions. Executives were asked to update breakeven prices by basin, and they were quizzed about how much oil production may grow. Questions also included anticipated changes in the employee headcounts, as well as the oil price needed to return publicly traded E&Ps to growth mode.

For 15% of the executives who cited “other” reasons, the top answers included “personnel shortages, limited availability of equipment and supply chain issues. An additional reason cited was uncertainty regarding future oil prices and whether they would stay high. Some felt that a combination of reasons is equally responsible for driving restraint.”

For the entire sample of firms, the average oil price needed to “profitably drill” was $56/bbl, higher than the $52 price when the question was asked last year.

“With the jump in oil prices, almost all firms in the survey can profitably drill a new well at current prices,” researchers noted. “Large firms (with crude oil production of 10,000 b/d or more as of fourth quarter 2021) need $49/bbl on average to profitably drill, lower than the $59 for small firms” with under 10,000 b/d.