Natural gas and oil operators are likely to report a return to normalcy — but not growth — when they unveil their third quarter results in the coming weeks, and demand forecasts may be hazy amid a historic hurricane season and the expanded wave of damaging Covid-19 infections. 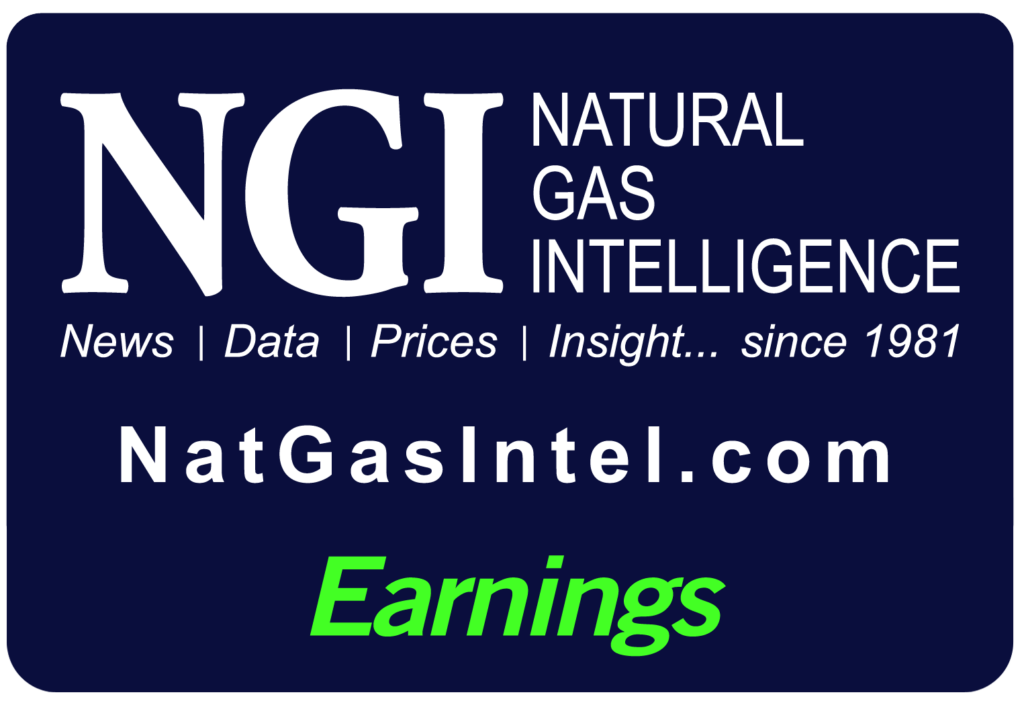 After shutting in oil and gas wells during the second quarter, most Lower 48 exploration and production (E&P) companies “turned the majority of their liquids production back online by June or July,” Enverus senior research associate Tyler Hoge told NGI.

Output is slowly ramping up, “but the declining nature of shale production will offset most of the rebound.”

The gas-heavy E&Ps “have had several years of dwindling balance sheets, and many are hoping this winter will provide much needed liquidity relief,” Hoge said. “Hedging has helped in the past, but current average hedge positions are around $2.50, so gas hedges this winter might be a detriment to the heavy hedgers if prices rebound above those levels.

“None of the major gas players have hedges that lock in more than 65% of their estimated production at certain prices in the next 12 months.”

During the second quarter, E&Ps concentrated on capturing savings in well costs from efficiency gains and drilling/completion (D&C) cost reductions, Hoge noted. For example, in the Permian Basin’s Delaware sub-basin, Enverus estimated there has been on average “a 36% reduction in well costs over the last two years…with most operators anticipating further savings in the second half,” Hoge said.

“Anticipated savings will stem from efficiencies like reducing cycle times, but the majority of market-related price reductions has likely hit a bottom.”

What happens in the Permian may dictate the fate of the Lower 48.

“The Permian had 140 rigs running in early October, and therefore makes up about 36% of all rigs in North America,” Hoge said. “But the lowest active count in the basin this year was 130, so activity has a long way to go before getting back to February levels of 420.

Meanwhile, the gas-heavy basins “should already be seeing more completions and production activity in preparation for the winter. Many operators have been waiting patiently for the heating months to turn on new wells as most natural gas price forecasts have high expectations for prices.

“Even some gas E&Ps that turned online new wells over the summer have choked back production to anticipation of higher prices.”

E&P capital expenditures (capex) in 3Q2020 should be at the low point for the year, Hoge said. The quarter “saw a bottom in rig counts in the first week of July near 290 and has since only rebounded to 385. The average rig count in the second quarter was 416 as operators were still finishing up jobs through the early stages of the pandemic.”

In agreement with Hoge, the TPH team said gassy E&P outlooks should be “extremely topical as investors start to weigh the upside in 2022. While we think the 2021 strip fairly reflects fundamentals, we are becoming increasingly bullish” for gas into the second half of 2021 and into 2022.

Analyst Gabriele Sorbara of Siebert Williams Shank also is forecasting a “quiet and relatively uneventful quarter.” Most of the E&Ps are expected to stay the course for the fourth quarter and into 2021. The industry’s focus should be “strictly on generating free cash flow and returning capital to shareholders while maintaining strong  balance sheets and liquidity  positions,” Sorbara said.

“Specifically, our models forecast that nearly 70% of our universe could miss oil production expectations and more than 80% could miss with higher capex.

The global oil and gas supply overhang could prevent a near-term recovery for the E&Ps, said Evercore ISI’s Steve Richardson. Some cyclical industries such as housing, autos and consumer businesses have seen a V-shaped recovery even as the coronavirus has continued, but “it’s a valid question as to how energy can participate in a recovery…

“The market has taken a skeptical view of oil consumption post-Covid. There is a long list of what needs to go right for the sector before equity investors return.” Demand needs to snap back, but “jet fuel represents a 4 million b/d hole in demand.”

There has been an uptick in energy demand during the third quarter, but it “was just an industry restart, not the resumption of growth,” Richardson said.

“Activity is resuming…as producers return from mid-year shut-ins and increase well completion pace to maintenance levels.” U.S. supply is expected to stabilize “but this shouldn’t be viewed as indicative of growth aspirations.”

Funding is still scarce “for all but the highest quality producers, and credit markets remain in the driver’s seat,” Richardson said. If oil prices increase, “industry must allow this reinvestment rate to fall so that the increase in free cash flow is significant. It will take time for equity investors to give credit for this shift.”

Evercore analyst James West expects to see mixed results. Still, it’s got to be better than the second quarter.

“Given that second quarter results were atrocious, third quarter earnings will at least have an easy sequential comparison,” West said. “Still, earnings should be mixed following four named storms in the Gulf of Mexico that will have an unfavorable impact” for operators with exposure to the U.S. offshore.

Completion activity in the Lower 48 “rebounded off the May trough,” West said. Active fracture (frack) spreads more than doubled.

“We expect operators will continue to add spreads early in the fourth quarter” as E&Ps work down their drilled but uncompleted, i.e. DUC well inventories.

Evercore’s team is of the view that the uptick “is very transitory as shut-in production is returning,” West said. “U.S. shale growth will not return as E&Ps focus on maintenance levels and consolidation continues to occur. In other words, the U.S. land market has clearly peaked and will be smaller going forward.”

“We expect rigs will be added to the field early next year as budgets reset after the DUC well inventory gets worked down. Still, it will likely take until the middle of next year for the rig count to go back above 300 again.”

Frack activity is chugging along, with the spread count climbing more than 20% in 3Q2020, according to TPH. More gains are expected through October, with November and December less certain “given seasonal patterns, upstream budget exhaustion/planned frack holidays, and the potential for weather to dent the recent momentum.”

The U.S. active frack spread jumped about 17% in September month/month, according to TPH. That came on the heels of a 20% increase in August from July.

“The particularly striking plus-70% quarter/quarter increase in the Permian Basin stands out as a stat worth highlighting,” the TPH analysts said.

“Even with a decent dose of frack high horsepower being scrapped, we continued to believe the second half of 2020 through 2021 will prove quite challenging for the pumpers (and other completions services players),” said the TPH team. The U.S. demand forecast of 180-190 active spreads “remains stubbornly well below marketed supply” estimated at 350-400.

“That said, frack pricing seems to have troughed, and if we continue to see demand ramp, prices may inch higher sometime in 2021 as stacked spreads will require capital to reactivate.”

There’s no getting around the fact that E&P capex this year is at a low, according to a survey of operators by Evercore. This year is on track to be the third worst in the survey’s 35-plus year history, behind declines of minus 33% in 2016 and minus 31% in 1986.

The shale industry, he said, “is an impaired market.”

Downturns usually “sow the seeds for upturns,” but this one could have the most dramatic impact on the Lower 48 market than previous collapses in prices. The U.S. land market “has likely peaked and will be smaller going forward.”

Evercore’s West said the OFS industry has to shrink.

“It doesn’t take a PhD in economics to acknowledge that the world likely does not need 320 individual firms operating in one sector. Over this five years, there is nearly $330 billion in debt that is coming due in energy across both E&P and OFS.”

Assuming the credit markets are challenged and near-term returns on capital may be stagnant or lower, “balance sheet and restructuring activity is likely to increase significantly.”

Nearly 85% of the debt, estimated at $280 billion, is borrowed by E&Ps, and they are the OFS customers.

“We believe that the crescendo of defaults beginning this year will force consolidation in the upstream, which will then prompt combined firms to pursue supply-chain savings and capex reductions,” West said. “If the E&P industry consolidates at a faster rate than OFS, then OFS has a major problem.”

E&Ps and their OFS partners are expected to provide more positive news on environmental, social and governance, aka ESG initiatives.

Many U.S. utilities have been joining the European supermajors including BP plc, Equinor SA and Royal Dutch Shell plc in moving toward lower/zero carbon emissions in the energy transition.

“We expect to hear more on ESG initiatives from E&Ps in 3Q2020 earnings, but don’t expect a notable macro shift downward in D&C spending that would be attributable to those initiatives,” said Hoge.

West also sees momentum building for the OFS sector to play a key role in the energy transition.

“All the elements are finally in place for the global energy mix to further diversify from oil, especially with regards to cost, technology, financial incentive and government support.”

The “mega-themes” include the support by the OFS sector to build out liquefied natural gas (LNG) and hydrogen infrastructure, which could drive an upturn.

All of that should be driven first by sanctioning deferred LNG projects “as natural gas is cheap and plentiful,” West said. “About $100 billion of LNG-related project spend has been deferred this year, but key LNG companies are in significantly better financial positions than E&Ps and we expect these projects to get advanced in the coming year(s).”

The gassy Lower 48 basins also “should continue to see a relative uptick in demand for drilling and stronger LNG exports, which helps to support the longer term supply/demand narrative.”

“The hydrogen narrative took top billing during 2Q2020 earnings and should be a key theme for the next several quarters,” West said. Many more companies are expected to “tout their offerings in this multi-decade growth theme. More advances in technology are required to drive down cost, with the OFS industry perhaps too uniquely qualified.”