Oil and natural gas activity declined during the third quarter across Texas, parts of New Mexico and Louisiana, the Federal Reserve Bank of Dallas reported Wednesday. 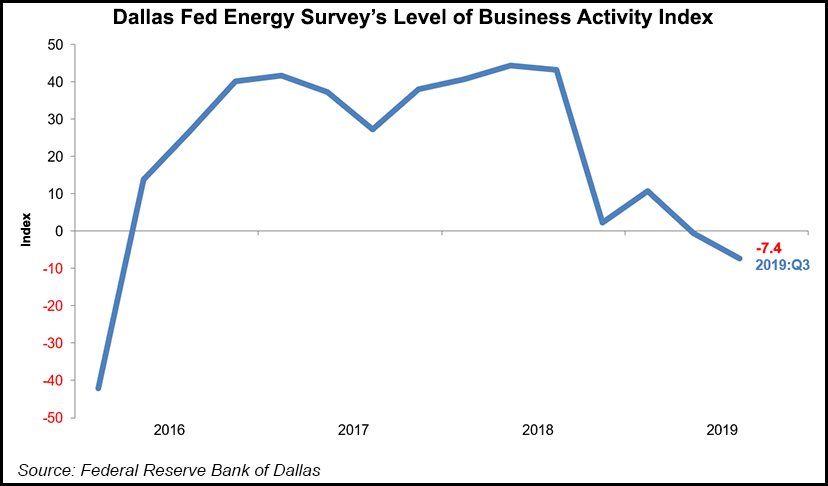 The Dallas Fed, as it is known, every quarter surveys executives of exploration and production (E&P) and oilfield services (OFS) companies that are within the Eleventh District, which includes Texas, southern New Mexico and northern Louisiana. Many of the operators have national and global operations.

“Conditions in the oil and gas sector deteriorated in the third quarter, with overall activity and employment declining modestly,” senior research economist Michael Plante said. “Oilfield service firms were most affected, with a sharp drop in equipment utilization and operating margins.

“In general, the survey results suggest the second half of 2019 is going to be a tough one for the industry.”

From E&P and OFS company responses, the Dallas Fed creates a quarterly business activity index, the broadest measure of conditions facing the region’s firms. According to the latest survey, the index fell to minus 7.4 from minus 0.6 in the second quarter. Negative survey readings indicate contraction; those above zero suggest expansion.

The OFS sector drove the decline, with the index slumping to minus 21.8 from 6.6. Among OFS firms, the equipment utilization index plummeted 27 points to minus 24.0, which the lowest reading since 2016. Meanwhile, the prices received for the OFS index fell further into negative territory to minus 18.5 from minus 12.1.

“The overall industry conditions are not good,” one E&P executive told the Dallas Fed. “Prices are too soft and erratic, and costs are too high. My outlook for the business is pessimistic right now.”

Executives also responded to a series of special questions about constraints limiting current activity, how many drilled but uncompleted wells (DUC) were in the queue, as well as when they expect the U.S. oil rig count to bottom out.

“When asked about what factors are restricting near-term growth in activity, 42% of respondents cited low oil and natural gas prices as the prime constraint,” Plante said. “Limited access to credit and capital, as well as investor pressure to generate free cash flow, were also mentioned as limiting factors.”

The survey found, perhaps not surprisingly as many of the firms responding work in the Permian Basin, that production increased, albeit more slowly.

“The oil production index was at 15.7 in the third quarter,” according to E&P executives. “The natural gas production index fell to 6.5 from 13.4, suggesting a slower pace of growth this quarter.”

The aggregate employment index slid to minus 8.0 from 2.5, with the hours worked index down to minus 2.4 from 3.1. The index for aggregate wages and benefits fell to 6.2 from 14.5.

Overall, executives said their outlooks remained unchanged overall. However, the OFS index remained negative at minus 14.8, said researchers. “While uncertainty continues to intensify, slightly fewer firms noted rising uncertainty this quarter than last, and the index fell 12 points to 38.”

Of note, half of the executives surveyed said they thought the Permian DUC count was lower than the estimate by the U.S. Energy Information Administration (EIA). The EIA each month provides information about activity in the major Lower 48 plays in its Drilling Productivity Report (DPR).

“The issue of DUCs is important since they represent a potential source of new production that could be tapped by shale companies at lower cost than drilling an entirely new well.”

According to the most recent DPR, which compared data for August and July, DUCs decreased across every Lower 48 play reviewed except in the Haynesville Shale in Texas and Louisiana, which increased by two to 186. DUCs fell month/month in the Eagle Ford Shale by 16 to 1,458, while Permian DUCS fell by 25 to 3,839.

Regarding when they expect the oil rig count to bottom out, the most frequent response was 4Q2019, identified by 28% of executives.

Only 2% said the number of U.S. rigs drilling for oil already had bottomed out. Twenty-three percent of executives selected 1Q2020, 20% chose 2Q2020 and the remainder (26%) said they believe the rig count will bottom out sometime after 2Q2020.

Said one E&P executive surveyed, “Crude oil prices will need to drop to around $40/bbl to find a bottom in the rig count.”