Bankruptcies in the upstream sector are on the rise this year as commodity prices have fallen with little sign of a rebound anytime soon, according to Haynes and Boone LLP, which regularly tracks filings across the oil and gas industry. 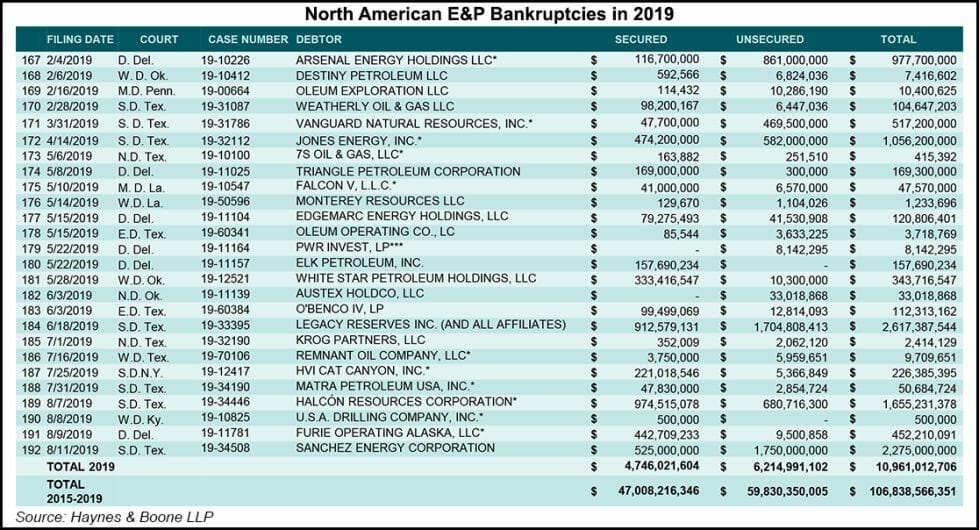 Year-to-date 26 North American exploration and production (E&P) companies have filed for bankruptcy, the law firm said, noting a sharp uptick since its last report in May. That compares to 28 total last year and 24 total in 2017. Haynes and Boone, which represents E&P, midstream and oilfield service (OFS) companies, began tracking filings in 2015 following the 2014 commodities downturn.

While bankruptcy filings in the upstream sector have since declined, that trend could reverse itself soon. Operators across the country have scaled back as commodity prices have slid. Some gas producers in particular are facing even more pressure to perform as they grapple with high levels of debt, oversupply and investors that are losing interest in the space as they expect better returns.

However, as gas prices remain depressed, oil has been range bound too, hovering below $60.00/bbl. Haynes and Boone said it’s too early to predict a new wave of filings based on recent bankruptcies, but “some stakeholders may have given up hope that resurgent commodity prices will bail everyone out,” especially financially troubled operators.

“For these producers, the game clock has run out of time to keep playing ”kick the can’ with their creditors and other stakeholders,” the firm said.

The OFS sector has fared better to date, but as operators across the Lower 48 curb their drilling programs, service providers have taken note, laying down equipment and adjusting their outlook as they brace for another rough cycle.

Since 2018, Haynes and Boone said 22 OFS companies have filed for bankruptcy, perhaps most notably Weatherford International plc last month. Filers have reported $11.5 billion in aggregate debt this year. That’s down from 40 filings in the space in 2017 and aggregate debt of $35 billion. The firm said it would continue to monitor the North American OFS sector, which it said “is in a trough” given the slowdown across the industry.

The midstream sector, meanwhile, hasn’t appeared to suffer the same financial hardships in recent years, Haynes and Boone said. Twenty-seven North American midstream companies, defined by the firm as those involved in gathering, transporting, processing or storing oil and natural gas, have filed for bankruptcy since 2015. Some firms this year have indicated that they expect slower growth for some aspects of their businesses as E&Ps curb their output.