The North America oilfield services market “eroded more than we thought” in 3Q2012, but the spending decline could turn in January, said the research team at Tudor, Pickering, Holt & Co. (TPH). 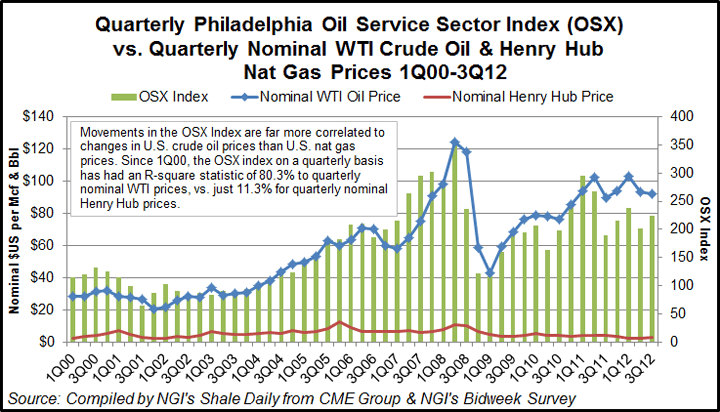 “The seeming E&P apathy around activity levels into late this year are compounding the equipment oversupply issues and will further erode margins,” said the analysts. “There is ‘hope’ by some that this spending decline turns with the calendar in January.”

Onshore “activity may well turn, but it seems wishful thinking to believe Jan. 1 means a great sense of urgency and rigs/equipment immediately bounce back.” Canada also may have “problems where the typical 4Q2012 seasonal improvements may prove elusive,” from a combination of apathy and economics.

All together, Wall Street estimates for 3Q2012 earnings “are meaningfully too high,” said the TPH team. “This isn’t a new concept” as it’s been a focus for buyers in the past few weeks, “but until we have some hint on the horizon of enough activity improvement to tighten the market, we think the North American-focused stocks generally lag other oil service names.”

Stock valuations are a “saving grace” for the North American service companies, which offers a wee bit of optimism over the long-term. Share prices “may rally” if natural gas prices also rally, said TPH analysts. However, “oil service revenues/earnings are aligned with E&P spending.”

A “bounce” in natural gas prices could happen “without much of a bounce in activity, and 10%-plus increases in total demand are needed to tighten domestic oil service markets. It will happen, just not likely in the near term.”

According to the TPH review, industry sentiment “is decidedly worse exiting September than it was entering. There was likely some disbelief that both horizontal and oily activity would plateau/move lower. There’s now been time for that to set in as real.” Apparently, there is “less contract appetite on the part of E&Ps, combined with more rigs (new builds) and lower demand, which is pressuring utilization and also driving dayrates lower.”

Price erosion in the past month has been evident for pressure pumping services, said analysts. Even though the pressure pumpers have more “visibility on their costs moving lower” for things such as guar, a key ingredient in hydraulic fracturing fluid, “this looks to us like the cost relief is being competed away.”

Pricing isn’t the only thing, however. Capacity also “is being stacked,” said analysts, which has moderated the near-term oversupply.”

As North American operators prepare for 3Q2012 earnings reports, the TPH analysts said they expect the tone to be “very cautious” because of recent market erosion.

“Estimates are quickly falling for 3Q2012, but 4Q2012 is going to be a tough hurdle, so managements will need to rein in” end-of-year expectations during conference calls. Even with West Texas Intermediate crude oil prices of $90/bbl-plus and a recovery in natural gas prices, analysts said the conference calls may be more about end-of-year holiday-related downtime than visibility for 2013.

Since early 2000 the Philadelphia Oil Service Sector Index on a quarterly basis has had an R-square statistic of 80.3% to quarterly nominal WTI prices, compared with just 11.3% for quarterly nomination Henry Hub prices, according to CME Group and NGI‘s Bidweek Survey data.