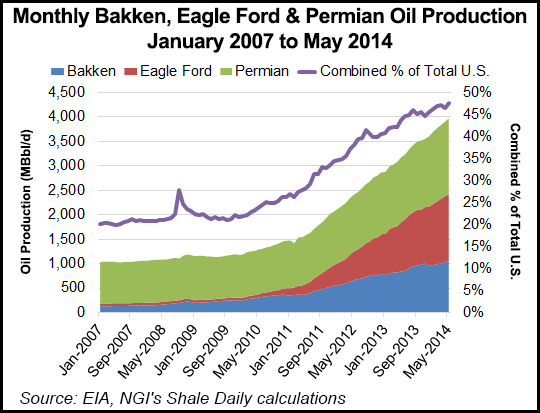 Noting that EOG has not yet “reached the peak of the learning curve” in the Eagle Ford, Thomas said recent production results show “that our Eagle Ford quality is holding up quite nicely.” He said that 21 of 29 wells completed in Gonzales County had initial production rates of 2,500 b/d or more.

While drawing longer laterals with a 50% increase in the number of stages in a given well, EOG plans to complete 520 net wells in the Eagle Ford this year, with 260 already completed at mid-year, Thomas said. EOG remains “bullish on crude oil prices,” and is a supporter of crude oil and condensate exports (see Shale Daily, June 25).

“Regarding North American natural gas, we don’t have any plans to reinvest in dry gas opportunities at current prices,” Thomas said. “As we expected, the strength we saw in gas prices earlier this year was only temporary, driven by the coldest winter weather in 14 years. Recent high storage injection numbers again verify the enormous supply deliverability of untapped shale gas in the United States.”

Most of the questions for Thomas and Billy Helms, executive vice president for exploration/production, were centered on the prospects for growth in several new plays, as well as EOG’s assets in North Dakota, Texas and Wyoming. They assured analysts that EOG has the assets and the inventory depth to sustain its current growth rates.

In response to an analyst’s question, Helms said that although they each have great growth potential, the Leonard and Wolfcamp shale plays are very different geologically.

“The production profiles, although they may start at similar initial production rates, are different because they are different types of reservoirs; the decline rates and product mixes are different,” said Helms, adding that this means ultimately the two plays will have different ultimate estimated recoveries.

Helms said EOG expects activity in the Permian to increase over time. “The luxury we have right now is that we have a lot of high-quality plays for allocating capital, so it gives us the time to make sure we understand the property completion techniques and spacing before we really start increasing activity in each play.

“We’re pretty excited about the potential we see in the Permian, and we are taking our time to really make sure we understand everything before we ramp up our activity real quickly.”