Storage overhang isn’t enough to temper the optimism of EnronOil & Gas Chairman Forrest Hoglund when it comes to the outlookfor gas this year and next. With demand expected to grow andproduction expected to fall – 3% by Hoglund’s count – on softdrilling activity, the coming months are shaping up to be good onesfor producers.

“We think gas demand is going to grow as the year goes ahead in1999, so we think you’re going to see some upward pressure on gasprices, and we think you’re seeing it in the market already inanticipation of what is going to come,” Hoglund told attendees lastweek at the Ziff Energy North American Gas Strategies Conference inHouston.

Hoglund pointed out dry gas production has been essentially flatsince 1994: 18.8 Tcf in 1994, hitting a low of 18.6 Tcf in 1995 anda high of 19 Tcf last year. The static supply was contrary to theexpectations of many who were watching rig activity climb duringthe period, Hoglund said. In his view the factors that support astrong price outlook include record low rig counts, high andclimbing decline rates, and the fact the late 1990s have seen nosignificant new domestic gas plays as were seen in 1993 and 1995,save for the deep-water-inspired Gulf of Mexico renaissance.

The Gulf of Mexico Shelf has been hit with the sharpestdeclines, but other regions, such as Texas, Louisiana, Alabama,have been hit hard, too. The 1997 decline rate for the Gulf ofMexico Shelf was 41%, according to Hoglund. The deep-water figurein 1997 stood at 28%. These are up from 21% and 13%, respectively,in 1990.

“Any kind of economic studies you run show the economics havebeen pretty tough out there [on the Shelf]. You’re just not findingthe bigger reserves anymore, and I think we’re going to see theShelf continue to decline on down.

“Deep-water has come on nicely but it’s got the same kind ofsituation that has to be overcome because we’re also talking abouthigh decline rates in the deep-water. They started out lower as thefields were really flush, 13, 14%, but now they’re up in the 28%range, not as high as the Shelf, but certainly you’ve got to add alot of new fields coming on just to take care of the decline eachyear in the existing base that you have out there. We certainlyexpect the deep-water to continue to grow. We’re not saying wethink it’s going to decline in total. And I just think it’s goingto have to do very well just to offset what we’re going to end upseeing out in the Shelf.”

Further, Hoglund said production levels used to peak in thewinter and drop off in the summer. The winter peaks aren’t thereanymore. “And they aren’t there for a reason. Those wells have tobe on all year long, steady, for us to be able to meet the demand.That’s the only way we’ve been able to do it. When you do that youpull the wells harder; you get a higher decline rate.” Thanktechnological advances for the fact the industry isn’t adding thatmuch in reserves per well but is still finding ways to depletethose reserves more quickly.

“Our estimate of what it takes to keep production flat in theUnited States is 577 gas rigs running. The current gas rig count isabout 382, and when we look at year-end ’99 deliverability we lookat an average of 400 rigs running [346 onshore, 54 offshore] inthis particular year, and if that happens, we think you’ll see a 3Bcf/d decline in the natural gas capability in production byyear-end in 1999, which would be somewhere around 5% of the total.I’ve seen a lot of other forecasts in the 2 to 4% range. Mostpeople now think with the low level of drilling it is coming down.But if you just do the numbers and play with decline rates steady,not increasing anymore, and 400 rigs, these are the kind of numbersthat end up coming out: 3 Bcf/d down by the end of the year.” 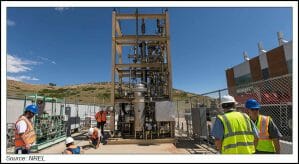 The Department of Energy’s National Renewable Energy Laboratory (NREL) has signed a memorandum of understanding (MOU) with San Diego-based Sempra Energy to work on decarbonization strategies. In the MOU, Sempra and NREL agreed to focus on advancing artificial intelligence to scale solutions across the United States. They also plan to integrate low-carbon fuel solutions, including…