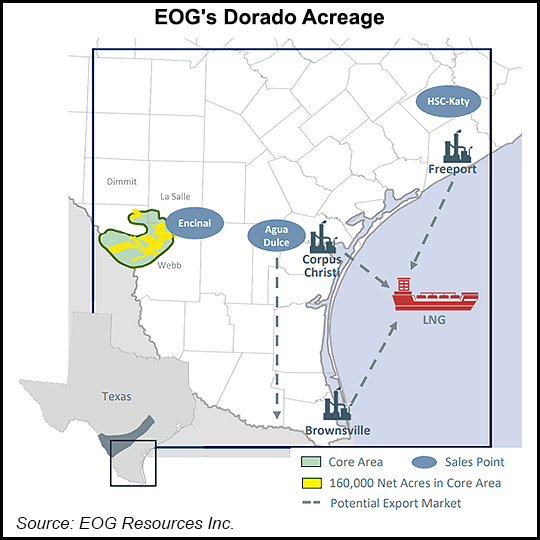 “Our preliminary plan for the play was to focus initial development on the Austin Chalk formation and then follow that with the Eagle Ford,” said Executive Vice President Ken Boedeker, who handles exploration and production. He discussed the plans during the first quarter earnings call.

Management’s initial thinking was that it would “benefit from initial well cost reductions as well as water and gas gathering infrastructure installed for the Austin Chalk” and then apply those advantages to the Eagle Ford, he said.

“We now expect to co-develop it with the Austin Chalk, which will provide additional opportunities to lower costs through scale and simultaneous operations,” said Boedeker.

EOG in February struck a supply deal with Cheniere Energy Inc., which is considering an expansion of its Corpus Christi LNG facility. Dorado’s South Texas location would offer ready access to pipelines into Mexico, where gas demand is growing, Boedeker noted

Dorado would also have connectivity to the “dedicated Houston Ship Channel market and as you look forward on, over the next five years, you have the potential to see an additional potential of like 5 Bcf/dof new demand growth,” he said.

EOG drilled initial Dorado test wells in late 2018. The field was moved to active development last year, and it has since completed 11 net wells.

“This year we anticipate completing 30 net wells, nearly tripling activity,” Boedeker said. “Since last year, we have doubled our production rate out of Dorado” to 140 MMcf/d in 1Q2022.

EOG’s breakeven to develop the gas at Dorado is less than $1.25/Mcf, he noted.

“Our progress in Dorado is on pace to make this North America’s lowest cost of supply,” said CEO Ezra Yacob.

EOG plans to run two rigs in Dorado this year, with close to one hydraulic fracturing spread.