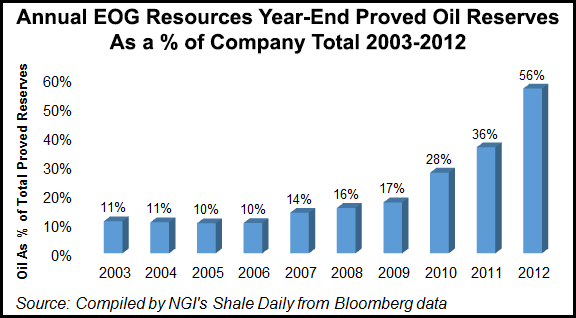 In the Permian Basin, the operator’s third onshore focus, capital expenditures “will likely be flat, but the spend ratio will shift dramatically from this year’s allocation of 65% in the Midland Basin, 35% in the Delaware, to 15% Midland Basin, 85% Delaware Basin next year.

“Also, we again plan to drill zero North American dry gas wells in 2014 because we see no light at the end of the gas oversupply tunnel until 2018.”

Papa, 65, who steps aside at the end of the year, is remaining on the board through 2014, but the call last week was expected to be the final one in which he elaborated on not only EOG’s success, but the macro outlook for North American natural gas and oil markets. The Enron Corp. executive in 1998 took over the underappreciated exploration and production (E&P) arm, Enron Oil & Gas Co., and led its public offering as EOG a year (see Daily GPI, Aug. 17, 1999;Sept. 10, 1998).

The oil and gas icon, known as the most quotable, agile and successful long-term survivor in the business, didn’t disappoint analysts regarding his take on North American oil and gas prices.

“Regarding oil, we believe that absolute 2013 total U.S. oil growth will be less than 2012, and this trend will continue in subsequent years,” Papa said. Through August, the U.S. Energy Information Administration month data has indicated 2013 oil output “on trend to increase 600,000 b/d on an annualized basis compared to 1 million b/d in 2012. We continue to be pragmatically bullish regarding oil prices, partially because we don’t expect any large international shale oil plays to impact global supply for at least five years.”

He’s not so bullish on U.S. gas prices.

“Regarding North American gas prices, I suspect I have a reputation as the most bearish CEO or former CEO in the E&P business, and I’m not going to change that reputation on my last earnings call. I believe gas prices will stay depressed until the 2018 timeframe, so EOG will not be in any hurry to generate a lot of gas deliverability. The current Marcellus location differential is likely just a harbinger of chronic Appalachian price dislocations that we’ll see over the next multiple years…”

The bearish gas outlook is because “I believe in 2018 is when we will have the first significant impact of the of gas exports” as liquefied natural gas (LNG) “from these converted former LNG import terminals…I think that’s when we will really have the first meaningful impact, and I think that may have some impact on prices, so that is kind of the that I see things.”

As in the first six months of this year, EOG “continued to hit on all cylinders” from July through September, Papa told analysts. Oil, natural gas liquids (NGL) and even gas production exceeded guidance.

“Because of continued strong Eagle Ford and Bakken performance, we are again raising our full-year 2013 production growth estimate for oil from 35% to 39%, NGLs from 14% to 17%, and total company growth estimate from 7.5% to 9%. The impact of the high reinvestment rate of return Eagle Ford, Bakken and Leonard [Permian Basin] investments is also showing up in our earnings per share and cash flow numbers,” along with the rate of return ratios.

The latest quarterly results “provide further confirmation regarding our five-year plan, where we expect to see the most profitable and highest oil growth rate of any large-cap independent, as we’ve done for the past six years. No other large-cap oil company has even remotely matched EOG’s oil growth rate either in 2013 or for the six-year average…

“We continue to have no interest in zero-profit North American gas growth and will continue the high-margin oil focus.”

CEO Bill Thomas said the latest results “confirm that EOG’s oil growth is not diminishing. Our six-year compound annual growth rate is 38%, which is awesome when you consider this growth is 100% organic. Each of our three key plays has 12-plus years of currently defined inventory, so EOG is built for the long haul.” Most of EOG’s capex is in just three plays, “yielding 100% direct after-tax rates of return, the Eagle Ford, the Bakken, and the Leonard…”

In the Eagle Ford, EOG reported strong results from 569,000 net acres within the crude oil window in the western and eastern portions of its leasehold; the operator also has 21,000 in the wet gas window and 49,000 in the dry gas window. In the crude oil window, it now expects to drill and complete 460 net wells this year, an increase of 20 from 2Q2013. Among the highlights in the western part of the play was The Bridgers Unit No. 1H well, with initial production (IP) at 2,195 b/d of oil and 1 MMcf/d of rich gas. Kaiser Junior Unit No 1H “has the best well to date in the west,” coming online at 2,815 b/d and 1.3 MMcf/d.

Average initial production rates for the Eagle Ford western wells are 20% higher than they were in January because of “continuous improvements in well productivity,” that has resulted in a “high confidence level in the strength of our large drilling inventory,” said Thomas.

EOG’s average IP in the Bakken/Three Forks this year is 1.9 times better than the peer average, according to Thomas.

“With approximately 1,600 locations in inventory, the Leonard is a powerful part of our offensive arsenal that will enable EOG to lead the in high-margin oil growth through 2017.”