With oil prices on the rebound, onshore heavyweight EOG Resources Inc. is holding firm on capital spending while it increases oil export capacity from the U.S. Gulf Coast, as overall production increased more than 17%. 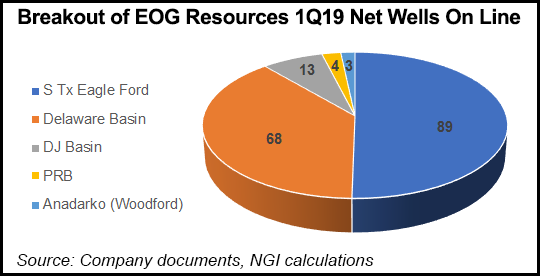 The Houston-based independent, which operates in nearly every Lower 48 basin, said it is maintaining plans to spend $6.3 billion at the midpoint on capital expenditures (capex) in 2019. In late February the company said that it would increase spending; it plans to complete about 740 net wells this year.

“I want to be clear on this point, we will not increase capex,” COO Billy Helms said during an earnings call on Friday. “We remain confident in our 2019 plan and activity will be adjusted throughout the year to achieve our production and capital objectives…

“The wells completed at the end of last year are outperforming our forecast and that trend has continued into the first quarter of this year. Equally important, we spent less capital than expected. Our capital was well below our forecast for the quarter as we are realizing the increasing efficiencies across our operations.”

The company also said it has reached agreements to increase its oil export capacity from the Gulf Coast to 250,000 b/d in 2022 and subsequent years, up from 100,000 b/d in 2020. The company expects to sell a portion of its production from the Eagle Ford Shale and the Permian Basin’s Delaware sub-basin to export markets in Corpus Christi, TX, and Houston.

“Despite the volatility of oil and natural gas prices in the Permian, EOG was able to flow all of its production and realize strong prices during the quarter and in aggregate EOG realized U.S. oil price was $1.21 above West Texas Intermediate in the first quarter and our U.S. gas prices were only 36 cents below Henry Hub,” said marketing chief Lance Terveen. “This is a tremendous achievement, and navigating in a long-term market crude oil and natural gas marketing is an integral part of EOG’s value creation strategy.”

EOG also has operations in the Bakken, Barnett and Marcellus shales and the Anadarko, Denver-Julesburg (DJ), Powder River (PRB) and Williston basins.

EOG brought 177 net wells online during 1Q2019, 89 of which were in the Eagle Ford and 68 were in the Permian. The company also brought 13 DJ Basin and four PRB wells online, plus three wells in the oil window of the Woodford Shale in the Anadarko Basin.

During the quarter, the company secured local sources of sand for hydraulic fracturing in the Eagle Ford, where it also made progress developing new completion designs. EOG also advanced plans to develop infrastructure, including oil and gas gathering lines and water handling systems in the PRB. EOG said its drilling program in Woodford during the quarter was focused on further delineating the play and testing additional targets. Completions in the Bakken were deferred until the summer.