Houston-based EOG Resources Inc., one of the Lower 48’s biggest oil and natural gas producers, is looking to give back to shareholders instead of boosting volumes, with discipline still the mantra going into 2022. 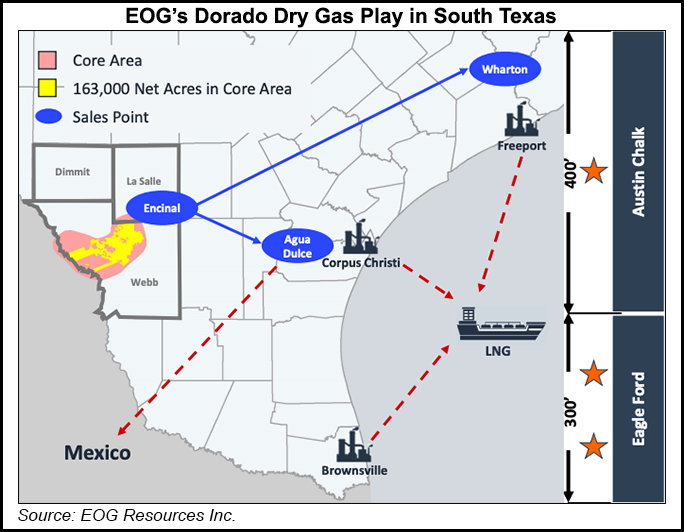 The independent delivered better-than-expected natural gas, oil and liquids production during 3Q2021, along with sharply higher profits, CEO Ezra Yacob said during a conference call to discuss results. Yacob took the helm last month after working for the Minerals Division at the U.S. Geological Survey.

“EOG has never been in better shape,” he told investors. “We extended our track record of reliable execution with better-than-expected production, capital expenditures, operating costs and product prices….

“Our high-return business model is sustainable for the long term, underpinned by a deep inventory of double premium drilling locations…We also remain optimistic about the potential of new exploration plays to improve the overall quality of our inventory.”

Boosting production in light of higher commodity prices is not yet on the table, though. For EOG, there are no plans to grow “until the market clearly needs the barrels.”

Growth is going to depend on “market fundamentals, not price,” in 2021 and beyond. EOG is looking for signs of low spare capacity and oil demand recovering to pre-pandemic levels.

The plan for now is to maintain oil production at 440,000 b/d, which would be below third quarter results.

Following the oil price rout that began in 2014 and extended into 2016, EOG “made a permanent upgrade to our investment criteria,” Yacob told investors. “Our premium hurdle rate was established, not only to protect the company’s profitability in 2016 but all future commodity cycles.”

The changes paid off. By the second half of 2016, EOG was reinvesting capital and paying the dividend within cash flow. It also expanded the inventory of its “premium: wells by more than 30%, while adding inventory that met the company’s threshold, Yacob explained. EOG now has a minimum return hurdle of 60% direct after-tax rate of return at $40/bbl oil, which was initiated during last year’s downcycle.

Wellhead Volumes Up, Though

While EOG has no plans to raise output in the near term, oil and gas wellhead volumes were up across the board year/year. Production was up 2% sequentially to 844,400 boe/d, while in 3Q2020, output totaled 716,000 boe/d.

Meanwhile, EOG’s per-unit cash operating costs were 5% below the midpoint of the guidance range, primarily on lower-than-expected lease, well and transportation costs. Capital spending during 3Q2021 totaled $935 million, compared with $499 million in 3Q2020.

Well costs declined as efficiencies improved. EOG said it also was able to offset “inflationary pressures with efficiency improvements in many areas,” including the use of “super-zipper” completion techniques. On multi-well pads, zipper completions allow wells to be done simultaneously. For example, one well may be pumped while wireline completions are performed on another well.

Is Dorado An LNG Opportunity?

EOG already is developing Dorado, a stacked natural gas-rich discovery in South Texas, where earlier this year it had amassed a 163,000 net acre leasehold. Dorado reserves could prime EOG to move gas supply from any Gulf Coast export project.

The formation, which runs through the Austin Chalk and Eagle Ford Shale, is said to have an estimated 21 Tcf net resource potential.

LNG demand is “growing over time, obviously,” Terveen said. With its first-mover advantage in Dorado, EOG already has finalized some contracts.

“We’re going to continue to look at new opportunities from an LNG standpoint,” he said. “We’re  very well positioned. Again, it gets back to our transporter export capacities and…having that ability to transact. We can definitely be very nimble as we even think about new opportunities.”

EOG by late next year also is piloting a carbon capture and storage (CCS) venture to remove carbon dioxide (CO2) emissions from oil and gas operations. EOG, which often is guarded in providing details about future projects, offered only a few nuggets during the conference call.

Yacob made clear, however, that the pilot to capture carbon dioxide (CO2) was not an indication that EOG’s business model would be changing.

Carbon capture “is a much lower return business,” he said. “We’ll keep an eye on that, but our real goal for carbon capture is just reducing our Scope 1 and Scope 2 emissions, which we’ve made significant progress on in the last several years.”

Executive Vice President Ken Boedeker, who oversees Exploration and Production, said EOG “is currently working on the engineering and regulatory portions of the project. As we work our way through these steps, we’ll get more clarity on timing. But right now, we hope to initiate CO2 injection in late 2022.”
For all the environmental, social and governance initiatives underway, EOG is allocating 2-3% of its budget “across the value chain” as it works toward net-zero emissions by 2040.

EOG’s flaring intensity rate increased 43% year/year in 2020, which drove an overall 9% reduction in greenhouse gas intensity, Boedeker said. “We continue to make progress toward our goal of zero routine flaring across all our operations by 2025, with our more immediate goal of 99.8% wellhead gas capture this year.”

The board ​​approved a 75 cent/share increase to the dividend, representing a $3/share annual rate and 82% higher than the previous level. A special $2/share special dividend also was declared.  Overall, EOG committed to return $2.7 billion to stockholders this year, or 30% of discretionary cash flow. In addition, the board approved up to $5 billion in share repurchases.