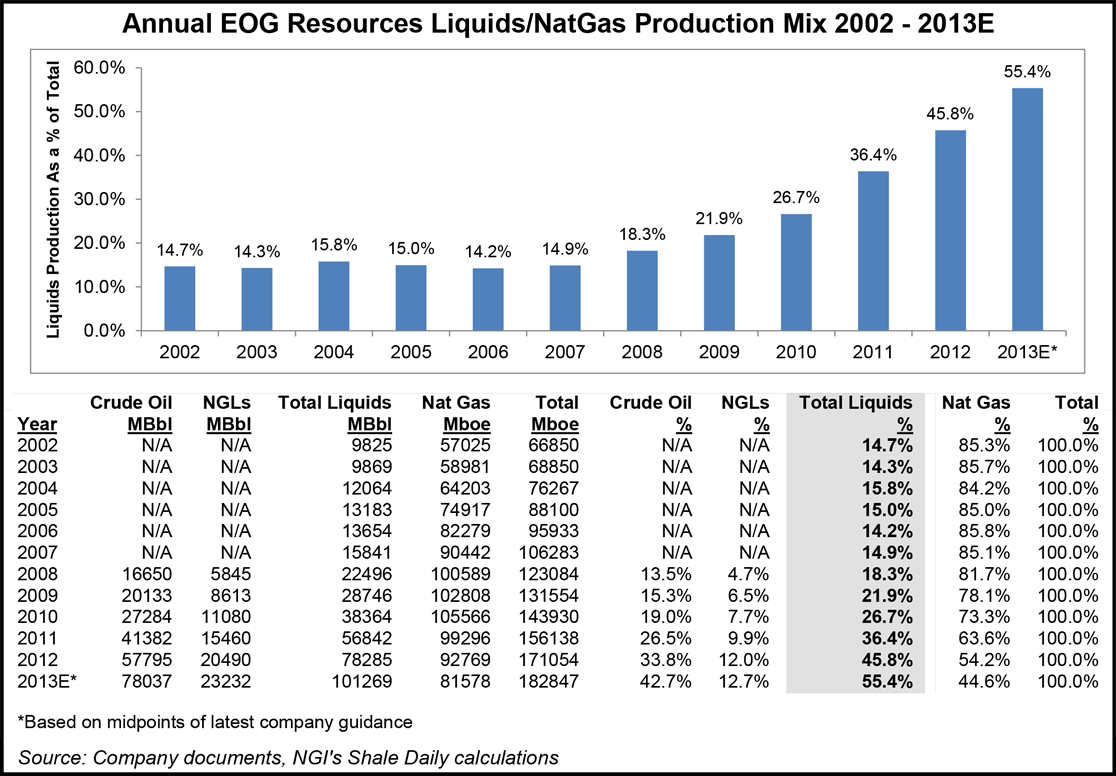 The operator was one of the first to shift most of its onshore drilling resources from gas to more fruitful oil and liquids targets.

Speaking at the Barclays CEO Energy-Power Conference in New York on Wednesday, Thomas began his remarks on natural gas by acknowledging that the onshore producer had been selling its noncore properties over the last several years.

In February, EOG said it planned to spend $7-7.2 billion on capital expenditures (capex) in 2013 (see Shale Daily, Feb. 15). Only about $25 million of capex was to be devoted to North American dry gas — the cost to keep properties held by production (HBP).

“We haven’t focused any money this year in dry gas drilling with gas prices like they are, although we do have a huge amount of dry gas in inventory that we basically have in the vault in HBP status,” Thomas said. “When gas prices turn around, we will drill good dry gas…But right now we have plenty of really good oil to drill.”

Vice President for Exploration and Production Billy Helms on Tuesday told attendees at the Peter’s & Co. Ltd. Energy Conference in Toronto that after five years of shifting the focus from gas to oil, the company is now at a turning point (see Shale Daily, Feb. 21, 2012),

“We had to sell off quite a few natural gas resources to fund our debt, and with that our gas volumes drops,” Helms said. “What we are seeing now is kind of the turning point in the company. We are not going to be drilling the gas wells, but we are seeing our gas production start to rise from the production of the associated gas with the oil that we are producing.

“We are not expecting to see North American gas [production increase] any more. We’ll start seeing modest growth as we go forward. We expect in our international operations in Trinidad and China and other places that we’ll keep production pretty flat. We’ll start generating some pretty substantive growth on total company basis as we go forward.”

In 2012, performance from EOG’s “big four” oil and liquids plays — the South Texas Eagle Ford Shale, the North Dakota Bakken Shale, the Fort Worth Barnett Combo and the Permian Basin Wolfcamp and Leonard — was enough to buoy the company’s overall production growth target to 7% (see Shale Daily, May 10, 2012).

Natural gas accounted for more than 85% of EOG’s annual production mix 2002-2007, but in 2008 that number began to decline as crude oil and NGLs made up a growing slice of the company’s production pie. Last year, gas accounted for just 54.2% of EOG’s production mix, with oil (33.8%) and NGLs (12%) more important to the company than ever. Even with the announcement of plans to grow gas again, EOG is expected to get less than half of its production this year from natural gas (44.6%), with oil (42.7%) and NGLs (12.7%) continuing to make up a large part of the mix.