EOG Resources Inc. is using a novel way to pull more oil from the Eagle Ford Shale in South Texas, injecting natural gas into existing wells, which is boosting recovery at a lower price. 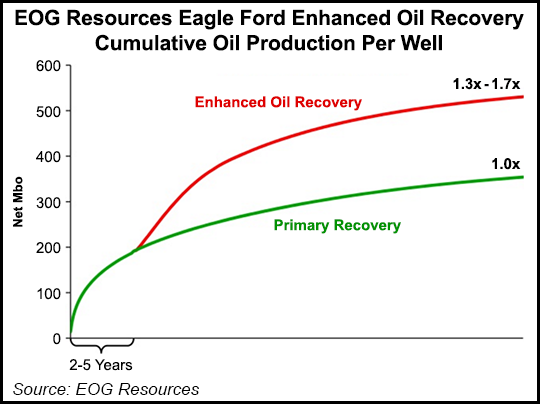 “Three years ago we initiated an effort to test EOR using gas injection in horizontal shale,” Helms said. “Results from lab experiments indicated that the process was technically feasible, but the economics and operational execution were going to be challenged without some creative problem solving.

“Our EOR team has not only solved the problem, they demonstrated returns that are competitive with our premium drilling program.”

The Eagle Ford “possesses unique geologic properties ideally suited for the company’s proprietary EOR techniques,” Helms said. Could it be used elsewhere? He was unsure. “These methods require very strong geologic containment that may not exist in most horizontal oil plays,” but tests are being considered for other onshore basins.

“The geological setting is important,” Helms said. The Eagle Ford formation allows some completions to be vertically contained, a unique feature that also plays a significant role in keeping the gas injection in contact with the targeted reservoir. “EOG’s acreage position is situated in the optimal thermal maturity of the play to maximize oil recovery.

“Being in the oil window has provided many benefits during the primary development but is also important for the EOR process. Acreage that is too far down-dip or up-dip in the play may not benefit as greatly. The EOR economics are significantly enhanced by the scale of EOG’s footprint in play. The infrastructure and facilities that are utilized during primary development across the field are key to being able to operationally execute the EOR process, thus providing a significant economic benefit.”

Injecting gas into some shale or tight rocks may not apply across the entire EOG Eagle Ford footprint or other horizontal plays, Helms said. “The four pilot projects have tested different geographic and geologic settings, each proving the concept successful. But further definition and time will be needed to assess the applicability and overall benefit across EOG’s acreage position.”

There is much to like on the producer side for the EOR process. For one, it’s not capital intensive.

“There is no incremental drilling required for capital cost to average approximately $1 million per well,” Helms said. “Two, the operating cost are low. The process makes use of produced gas readily available to the field, and there are few other incremental operating costs.”

A third reason to like the EOR is that it could have a big impact long-term on the Eagle ford base production profile.

“Unlike typical secondary recovery projects, the production response occurs quickly within the first two or three months and holds steady for longer,” he said. “The rate of return is still on par with primary drilling. But for each dollar invested, EOR delivers at least twice the net present value created as primary drilling.”

The EOR process could boost EOG’s incremental recovered reserves by 30-70% at a finding cost of $6.00/boe or less, Helms said.

But that’s getting a little bit ahead of the story.

“While this is a significant technical and economic breakthrough, rolling out this effort will take time and is dependent on the pace of primary developed drilling and field development,” Helms said.

EOG often holds its developments close to the chest, but along with the EOR testing, management also disclosed a “discovery” in the Austin Chalk in South Texas.

“The term ‘discovery’ is loaded, as many operators have been drilling the Chalk for years with varying degrees of success,” CEO Bill Thomas said. “Perhaps a more accurate characterization is that we discovered a new geologic concept in an existing play. Our team at EOG has cracked the code on how to make our particular footprint in the Austin Chalk a top tier horizontal play, earning returns on par with the Eagle Ford, Permian and Bakken.”

“While the Austin Chalk is not a new play, historically industry production has been inconsistent from well to well,” said E&P EVP David Trice. “While good wells are possible, the performance and resulting returns are highly variable across the play. However, using proprietary petrophysical analysis, we discovered how to apply new geologic concepts to the Austin Chalk and drill prolific wells consistently.”

Similar to the Eagle Ford, the Chalk is responding well to EOG’s completions style, Trice said.

“Our high density completions create complex fracture systems close to the wellbore and significantly improving well performance. Also like the Eagle Ford, the Austin Chalk benefits from the detailed work we conduct to determine the best target. The Chalk can be as thick as 140 feet in some areas, but our targeting efforts keep the drillbit confined to at best 20-30 feet of rock…It is too early in our exploration efforts to know how much of the Austin Chalk is prospective over our acreage, but subsurface data and detailed mapping throughout the field are encouraging.”

EOG shifted to “premium drilling this year,” Thomas said, which he defined as drilling in locations that generate at least a 30% direct after-tax rate of return at $40/bbl oil. “The shift is a game changer with significant long-term implications…This is the most important point: our shift to premium is permanent and not simply a temporary high grading process and a low commodity price environment…We do not need 50 rigs drilling thousands of wells per year. It will take far less capital to grow production at strong double-digit rates.”

EOG management agrees with a consensus view that the oil market has begun to rebalance, a process that should accelerate in the second half of the year.

“We believe that in the U.S it will take a sustained $60-65 oil price and 12 months of lead time for the industry to deliver a modest level of growth,” Thomas said. “However, what is true for the industry in general does not hold for EOG…With our premium drilling inventory, we believe our reinvestment advantage is $15-20/bbl lower than the average industry operator…And that may be the No. 1 question we received the last two months, or more accurately, ‘at what price will you accelerate and return to growth?'”

The top priority, he said is to fund the entire 2016 capital spending program through cash flow and reduced net debt from property sales. The second priority is to complete drilled but uncompleted wells.

During 1Q2016, lease operating expenses fell by 29% from a year ago while transportation costs fell by 12%. Total general and administrative expenses decreased 7%.