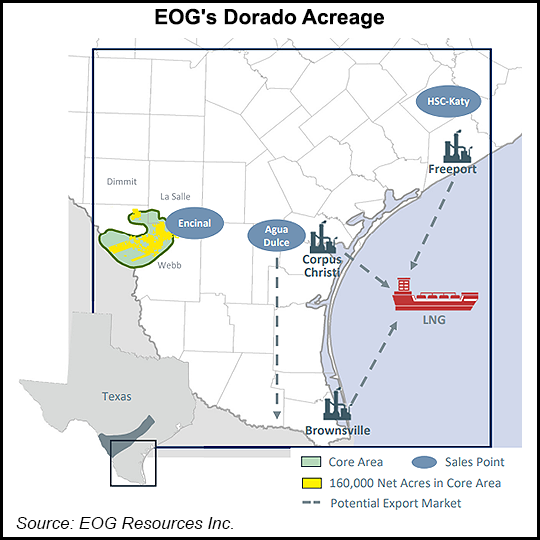 CEO Ezra Yacob told investors during a second quarter conference call the firm’s performance during the first half of the year “proves that we have emerged” from a pandemic-fueled downturn “better than ever.” He pointed to across-the-board increases in natural gas and oil production and simultaneous progress on the firm’s cost and emission reduction goals during 2Q2022.

“Our long-term vision is to be among the lowest cost, highest return and lowest emissions producers, playing a significant role in the long-term future of energy,” Yacob said.

It also reported progress in the development of its dry gas producing acreage in the South Texas Dorado Shale. EOG is relying on the long-term returns from its recent investments in the Dorado to meet growing domestic and foreigh demand for U.S. natural gas.

“On the natural gas side, we’re excited about the results of our South Texas Dorado play and its ability to play an increasing role in supplying the growing demand” of petrochemical and LNG markets along the Gulf Coast,” COO Billy Helms said.

EOG reported oil production for the quarter came in above the high end of its guidance, while natural gas and NGL production came in above midpoint estimates. Helms said “inflationary headwinds” and economic volatility tempered expectations for oil growth to around 4% for the year. Management had previously predicted oil growth of 8-10%.

Yacob said the producer had “offset a significant portion of inflation this year,” with a large part of savings by selling “legacy gas assets in the Rocky Mountain area” and improving Delaware efficiencies. Per-unit lease operating expenses dropped 13 cents during 2Q2022 to $3.87/boe, compared with $3.58 in the year-prior. It was about 7 cents higher than the midpoint guidance.

Yacob said “the current operating environment is challenging given the volatility of commodity prices and inflation headwinds,” but EOG plans to reduce hedges going forward. EOG has typically placed hedges on 20-30% of its gas and oil volumes in any given year. Yacob said the firm expects to initiate an early termination on some current hedges and “hedge significantly less” in the future.