The elected Board of Supervisors in Kern County, CA, in the middle of the state’s oil patch in the lower San Joaquin Valley, was sued in California Superior Court last Thursday for allegedly ignoring environmental risks in approving a $100 million crude-by-rail project in Bakersfield. The Sierra Club, Center for Biological Diversity and the Association of Irritated Residents, among others, filed the legal action. 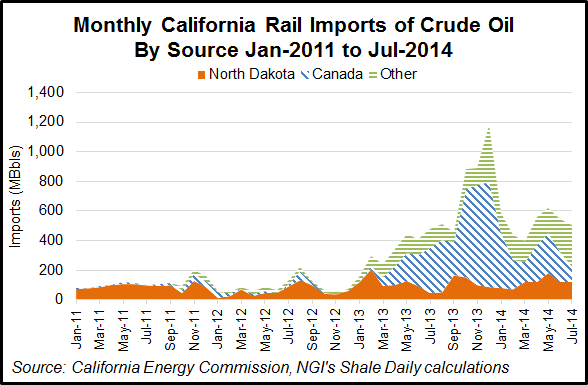 Alleging the environmental impact report (EIR) violated the California Environmental Quality Act (CEQA), the groups asked the court for a writ of mandate or peremptory writ to void the EIR for the Texas-based Alon Bakersfield Refinery Crude Flexibility Project, set aside the county board’s approvals, and order no subsequent approvals until the county fully meets CEQA.

Kern County lead attorney Theresa Goldner told the California Independent Petroleum Association (CIPA) that the board decision was “legal in all respects,” and the county will be pushing back against the action, “vigorously opposing the petition.”

At stake is a major energy infrastructure project proposing to greatly expand an offloading rail terminal, boosting its capacity to 150,000 b/d from the current 13,000 b/d, and reopen Alon USA Energy Inc.’s local refinery that has been closed since 2008.

California is a growing importer of crude oil via rail. The state’s imports of crude via rail peaked at 1.18 million bbl during December 2013, according to California Energy Commission data and NGI’s Shale Daily calculations. While imports have declined since last winter, a picture of steady growth (see chart) is still apparent. While over the past few years much of the imported crude came from Canada and North Dakota, there have been growing volumes from other states such as Colorado, Utah and New Mexico, which have elbowed their way in recently to the point that these other sources accounted for 56% of California’s crude-by-rail imports during July 2014.

CIPA and Goldner emphasized that the county and its Planning and Community Development Department that was also named in the legal action conducted “a lengthy environmental review” of the project, and the elected board approved the EIR after a “full and complete public process.”

CIPA said it was tracking the litigation because the same groups and the same issues could be raised on Kern County’s ongoing project-wide EIR on oil/gas production that is expected to be completed next summer at about the same time a statewide EIR is completed as part of the state’s well stimulation (hydraulic fracturing) law (SB 4).

The environmental and citizen groups called the proposed project a “massive ramp up in oil transport and processing” that poses “alarming health and safety threats” to Bakersfield residents and those living along crude rail transportation routes.

“The project entails the transport of highly volatile Bakken crude oil across multiple states, over treacherous and poorly maintained mountain passages, and past Bakersfield High School, without adequate federal and state regulation to ensure the safety of crude-by-rail transport,” the legal filing said.

It goes on to characterize the county-approved EIR as “systematically obfuscating and underestimating” the proposed project’s adverse impacts, such as air emissions, rail transport, hazardous material release risks, and greenhouse gas emissions.

CIPA said the expanded rail facility seeks to attract some of the booming oil production inland in Canada and the U.S. Midcontinent where supplies are cheaper than the imports now being refined in the West. Two-thirds of all the crude processed in California is imported oil.

Earlier this year, the California Energy Commission (CEC) began a series of fact-gathering sessions on crude-by-rail to include in its 2014 update of its Integrated Energy Policy Report (IEPR), which will go to the governor and state legislature later this year (see Shale Daily, June 30).

Compared to the first four months of 2013, crude-by-rail volumes are up by 90% this year, said Gordon Schremp, CEC senior fuels specialist, one of more than two dozen state, federal and industry energy and rail experts that made presentations during last week’s workshop. In 2012, 1.1 million bbl were moved by rail, and that jumped up to 6.3 million bbl moved by train last year. Through April this year, the total was 1.97 million bbl.