A coalition of 35 conservation and environmental groups from Virginia and West Virginia has come together in opposition to the Atlantic Coast Pipeline (ACP), outlining its concerns in a position statement released last week that says the project is not in the public’s best interest. 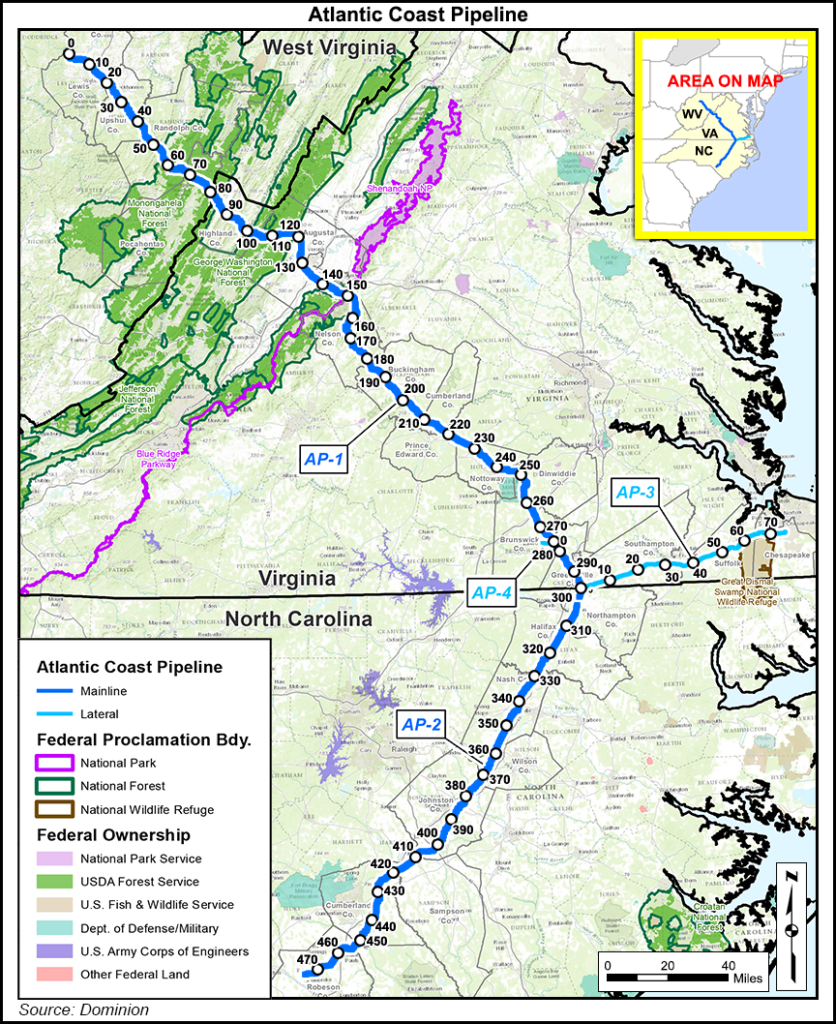 The Allegheny-Blue Ridge Alliance was formed last September when Dominion Transmission Inc., Duke Energy, Piedmont Natural Gas and AGL Resources, announced the $4.5 billion ACP project (see Daily GPI, Sept. 2, 2014). Initially, the group was formed as an information coalition to raise public awareness, but in last week’s announcement the group denounced the potential environmental impacts of the pipeline. It is the latest instance of growing opposition to projects to get Marcellus and Utica shale natural gas to new markets (see Daily GPI,Jan. 23).

The alliance said routes currently under consideration for the ACP “are not in the best interest of the public good of the affected communities and citizens of Virginia and West Virginia.” The alliance contends that the pipeline would threaten the safety of water supplies in the Allegheny-Blue Ridge region — a stretch of the larger Appalachian Mountain Range — cause further erosion in steep mountain terrain and bifurcate sections of the Monongahela and George Washington National Forests, among other things.

The Sierra Club’s Virginia chapter, the Southern Environmental Law Center and the West Virginia Environmental Council are among the more than two dozen groups backing the opposition. Dominion has said it would continue to work with all stakeholders as it works to develop the pipeline.

Last month, an analysis prepared by the Natural Resource Group on behalf of the project’s backers found that nearly 28,000 comments on the ACP filed with FERC as part of a 60-day scoping period were favorable (seeDaily GPI, May 18). Most of the comments came for non-governmental organizations. But more than 400 comments submitted by affected landowners showed they were opposed. Dominion has also said that several alternate route segments have been identified in response to local concerns along the project’s proposed path.

The 550-mile ACP would run from Harrison County, WV, southeast through Virginia and into eastern North Carolina. The pipeline would pair Marcellus and Utica shale natural gas with growing demand in Virginia and North Carolina. Construction is expected to begin next year and continue through 2019, with a tentative in-service date of 2018.

The alliance’s opposition is the latest in a series of anti-pipeline actions in and around the Appalachian Basin, including landowner lawsuits to stop survey work, municipal resolutions opposing development, protests and increased participation in the Federal Energy Regulatory Commission’s (FERC) review process (see Shale Daily, June 19; April 7).