Environmental groups that sued to throw out a federal plan allowing new exploration and mining on public lands heralded a recent win in court that they said was vital to protect greater sage grouse. 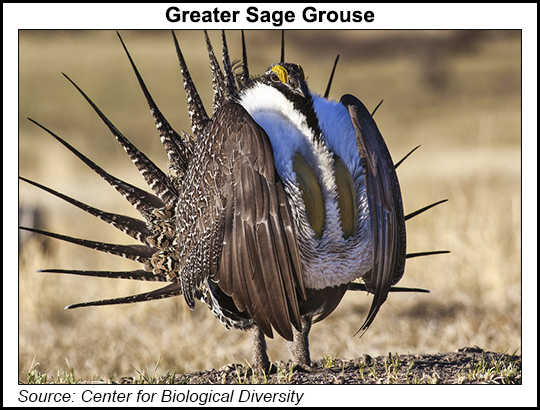 A federal judge on Thursday overturned a Trump administration decision to jettison sage grouse protections from 10 million acres in the West, primarily in Nevada and Idaho, and open the land to exploration and mining. The plan was part of a broader deregulation effort by former President Trump.

U.S. District Judge Lynn Winmill in Idaho said the Department of Interior’s Bureau of Land Management (BLM) failed to provide an adequate reason to disregard “all of the prior expert findings” that pointed to “continued population declines and habitat losses” for sage grouse if mining were allowed. That decision followed an earlier Winmill ruling that found the Trump administration changes to federal land management plans failed to protect the western bird from oil and gas development.

In the latest ruling, Winmill said BLM took the position that protections were “no longer needed” for sage grouse conservation. The BLM’s change in position required “a reasoned explanation,” yet the agency failed to do so, the judge said.

Winmill did not reinstate a mining ban that dated to 2015. He instead provided BLM a new opportunity to evaluate appropriate protections for the rare bird and resubmit a new plan, effectively putting a pause on any new development activity on the land.

“This ruling is a decisive win for sage grouse and all the other species of wildlife that rely on healthy sagebrush habitats,” said wildlife biologist Erik Molvar, executive director of the Western Watersheds Project, one of the plaintiffs. “The judge has a command of sage grouse science and was able to expose the Trump administration’s dismantling of habitat protections as an arbitrary attack on common-sense habitat protections.”

The environmental groups noted that greater sage grouse once occupied hundreds of millions of acres across the West. The federal government in the past decade designated the grouse as threatened, following years of rapid decline. Environmentalists argue that protecting grouse habitat benefits myriad other species that depend on the ecosystem the birds foster. These include pronghorn, elk, deer, golden eagles, native trout, and migratory and resident birds.

While the Winmill decision did not reverse the Trump-era BLM plan, environmental groups are optimistic that the agency may reverse course under President Biden, who directed the Interior Department to pause new oil and natural gas leasing on federal lands and offshore waters.

The Biden administration has signaled that the two-month freeze could lead to permanent limits down the road. The president campaigned on a  $2 trillion infrastructure and clean energy plan aimed at protecting the environment by shifting the country away from fossil fuels and toward renewable sources of energy.