Houston’s Enterprise Products Partners LP has a bundle of projects in the queue to expand Lower 48 natural gas, liquids and refined projects to serve domestic and overseas demand, the executive team said Monday. 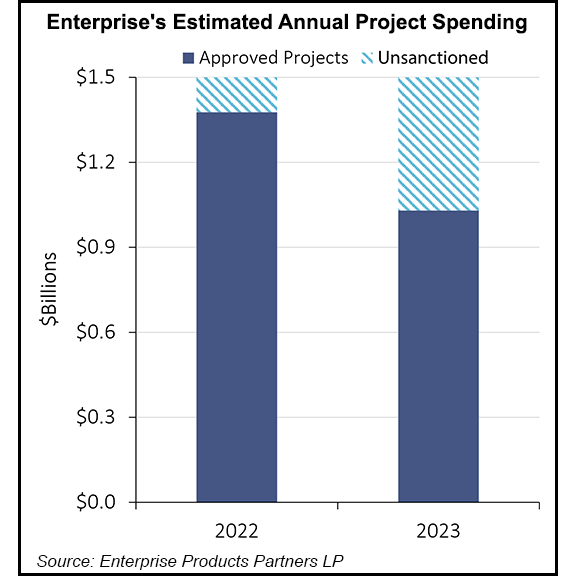 Seven projects are being constructed to expand processing, capacity and takeaway from Louisiana, New Mexico, Texas and beyond. Permian Basin natural gas liquids (NGL) processing growth is underway across the Delaware and Midland sub-basins.

The $4.6 billion of organic growth projects on the table is “related to both supply and demand,” CEO Jim Teague told analysts during the first quarter conference call.

The first three months of this year proved nearly as volatile for the U.S. energy markets as the year-ago quarter, Teague noted. In February 2021, Winter Storm Uri wreaked havoc because of freezing temperatures, forcing pipelines and compressor stations to be shut in.

The United States has to play a key role in helping the world as some nations transition from relying on Russia’s oil and gas, Teague said. He also admonished the Biden administration and called on federal officials to help expand U.S. energy resources.

“The U.S. has the capability to replace Russia’s export of oil products and natural gas to our European allies if we would unleash the given shale resources that we are blessed with,” the CEO told analysts.

“After being dependent on the Middle East for nearly 50 years, the U.S. became energy secure and an ex-net exporter of hydrocarbons over the last 10 years, while Europe moved the other way, depending on renewables and Russian natural gas.”
When Russia “marched on Ukraine,” he said the Western European nations changed “their ideology and came face to face with reality. It didn’t have to be this way, and it’s not too late to be corrected if we would start being honest about the importance of fossil fuels…for decades to come.”

Unless the nation is “ready to take a huge step back in human development, U.S. oil and gas production must continue to grow,” Teague said “Regulatory uncertainty, politics and green hyperbole have led to a gap in funding worldwide. We’re finding out the hard way that finding and producing these resources is on autopilot thanks to skilled people, new infrastructure, time and money.”

Teague then enumerated some of the oil and gas infrastructure projects in the Lower 48 that have been canceled in the past few years. He cited TC Energy Corp.’s now dead Keystone XL pipeline, which would have carried more Canadian oil to Lower 48 markets. The XL project was officially canned by TC last year, and the pipeline giant said it would not be revived.

The “constant roadblocks” have been “caused by the attitude in Washington and in the courts,” Teague said. “The U.S. is going to reach its full potential and provide global leadership in the face of Russia’s tyranny.”

“However, our politicians, regulators and the courts must start being honest about the world’s need for energy and step up and support the needed infrastructure including pipelines, plants and LNG export facilities,” he told analysts. “Otherwise, we’ll find ourselves increasingly beholden to despotic regimes for energy and for minerals and metals required to add green energy solutions.”

Growth Across The Board

Meanwhile, Enterprise has two more NGL processing facilities underway in the Permian Midland and Delaware sub-basins. It began to expand its Permian processing and NGL businesses last year with the takeover of Navitas Midstream Partners LLC.

For the Haynesville, the Acadia Gas System in Louisiana is expanding by 400 MMcf/d. The partnership’s 378-mile Haynesville Gathering system, which supplies Acadia, already has 1.3 Bcf/d of capacity and can treat 810 MMcf/d. The growth is geared to industrial markets and to the pivotal LNG export market.

In the Natural Gas Pipelines & Services unit, Enterprise’s total volumes increased 20% from a year earlier to a record 16.4 trillion Btu/d. Margin from the Acadian Gas System and Haynesville Gathering System increased a combined $4 million from 1Q2021, primarily because of higher transportation volumes. Gas transportation volumes overall increased by 793 billion Btu/d, driven by gains in the Haynesville-related Gillis Lateral Pipeline, which went into service in December.

Total propylene production volumes climbed year/year to 105,000 b/d from 83,000 b/d. Enterprise noted that a propane dehydrogenation, aka PDH, facility was offline in early 2021 for 46 days during a planned turnaround.

Beyond oil and natural gas, Enterprise also is teaming up with Occidental Petroleum Corp. “to build a carbon capture sequestration header system between Beaumont and Houston,” which would be sited near the HSC.