Enterprise Products Partners LP once again is seeking to expand its Acadian natural gas system in Louisiana amid increased activity among its producer customers in the Haynesville Shale. 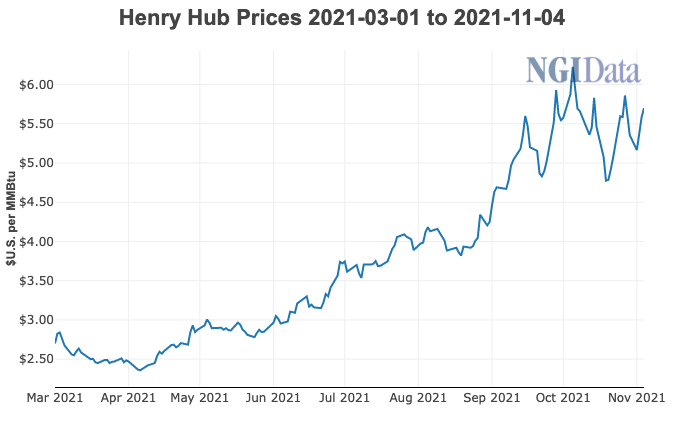 Enterprise is working to add 400 MMcf/d of capacity to the Acadian Gas Pipeline System, a 1,300 mile-long conduit linking Louisiana and Gulf of Mexico gas to local distribution companies, electric utility plants and industrial customers primarily in the Baton Rouge/New Orleans/Mississippi River corridor area. The network’s Acadian Haynesville Extension, which would boost capacity to 2.1 Bcf/d from 1.8 Bcf/d, and the 1.1 Bcf/d Gillis Lateral are expected to be completed by the end of the year.

In discussing the latest expansion and third quarter 2021 earnings, Co-CEO Jim Teague said the Acadian pipeline system is strategically located to move growing Haynesville and Cotton Valley gas supplies to “growing and higher-valued” industrial and liquefied natural gas markets. The CEO did not name names, but Haynesville pure-play Comstock Resources Inc. is a major shipper on the Haynesville extension and on Wednesday announced plans to accelerate drilling in the play, with average output of 1.42-1.45 Bcfe/d, nearly 100% weighted to natural gas.

At the same time, Enterprise is seeing “new opportunities arise” from potential customers in the Cotton Valley, a tight gas play in northeast Texas and northwest Louisiana, just above the Haynesville/Bossier formation.

Enterprise’s Acadian Gas System and the 357-mile Haynesville Gathering System fetched a combined $10 million increase in gross operating margin during the quarter. This was primarily because of higher capacity reservation fees and higher transportation volumes, which increased by an aggregate 543 billion Btu/d.

The record demand for gas transportation occurred even as prices have risen sharply over the past few months. Benchmark Henry Hub prices rose from sub-$4.00/MMBtu levels in July to a peak of $5.93 in late September, according to NGI’s Daily Gas Price Index.

Can High Gas Prices Be Sustained?

Teague noted that natural gas prices have doubled since the first of the year, and the CEO believes natural gas “now has a sustained price from $3-plus in order to encourage nonassociated production in places like the Haynesville and the lean Eagle Ford.”

Management also struck an upbeat tone regarding the Permian Basin. Enterprise reported lower combined earnings from its natural gas liquids pipelines in the Permian and Rockies. However, some of the decline could be attributed to some incentive rates offered to customers in the short term earlier in the year to help entice volumes.

“At the end of the day, if we can cover our costs and make some money, that’s what we’re going to do,” said Chief Commercial Officer Brent Secrest.

He said processing plants in the Permian have multiple interconnects in which they can transport volumes. “It’s a very efficient market, and we just have to compete harder.” That said, volumes should increase through the remainder of the year, improving margins.

Alongside 3Q2021 results, Enterprise announced plans to use hydrogen produced at its second propane dehydrogenation (PDH) plant to fuel its heaters, rather than relying on natural gas.

By modifying the design of the heaters for PDH 2, located in Mont Belvieu, TX, it would reduce the plant’s absolute carbon equivalent emissions by almost 90%. Construction of PDH 2 remains on schedule and on budget, with completion expected by mid-2023.

Responding to an inquiry over whether the same technology could be retrofitted at Enterprise’s PDH 1 plant, COO Graham Bacon said there would be “a lot more technical hurdles to overcome on PDH 1.” However, Enterprise may have other other units where contracts are rolling off that are probably more suited to hydrogen.

“We’re taking a look at all of those right now,” Bacon said. Enterprise would have the option to sell the hydrogen or use it internally.