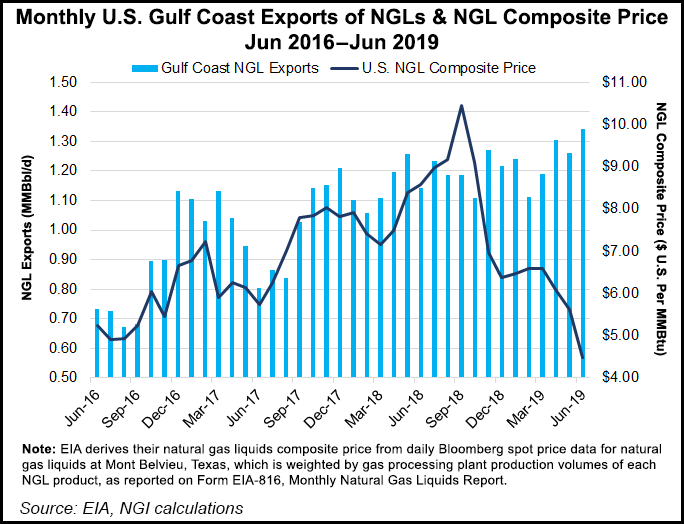 PDH 2, a project that Enterprise has mulled for about a year, would have the capacity to consume 35,000 b/d of propane and produce up to 1.65 billion pounds/year of polymer grade propylene (PGP). The natural gas liquids (NGL) plant is scheduled to begin service in the first half of 2023.

Enterprise general partner CEO A.J. “Jim” Teague said demand for propylene-based products “is strong” as it’s a “primary petrochemical that can be converted into hundreds of products that improve the daily lives of people around the world.” PDH 2 construction is expected to provide around 1,500-2,000 jobs.

LyondellBasell CEO Bob Patel noted his company had partnered with Enterprise on various projects. “As we aim to meet the growing demand for our products, ensuring a long-term supply of feedstock is critical.”

Enterprise, which has licensed Honeywell UOP’s Oleflex propane process, said its existing isobutane dehydrogenation plant, which also uses the Oleflex butane process, began operations in 1993, and it is building a second facility using the same process. That facility is set to ramp up before the end of the year.

Enterprise also has negotiated a fixed-cost engineering, procurement and construction contract with S&B Engineers and Constructors Ltd. S&B to date has built nine NGL fractionators and some deisobutanizers for Enterprise at Mont Belvieu, the Hobbs NGL fractionator in New Mexico, and the partnership’s ethane export facility on the Houston Ship Channel (HSC).

Enterprise began its fee-based midstream petrochemical service business by developing its first propylene fractionator in 1978, and PDH 2 is being developed with the same fee-based model.

“These anchor contracts are service-based under which Enterprise processes LyondellBasell-provided propane to PGP for a fixed fee,” management said. “This fee-based model leverages Enterprise’s integrated value chain by providing sourcing and storage from Enterprise’s NGL storage facilities in Mont Belvieu, and delivers PGP into its open market storage hub and growing network of PGP pipeline infrastructure.”

Enterprise also is expanding PGP refrigeration facilities at the HSC terminal to enable more than 5,000 b/hour to be loaded, as well as allowing co-loading PGP and liquefied petroleum gas on very large gas carriers.