Enterprise Products Partners Monday said it plans to construct an isobutane dehydrogenation (iBDH) unit in Mont Belvieu, TX, that will have the capability to produce 425,000 tons per year of isobutylene. 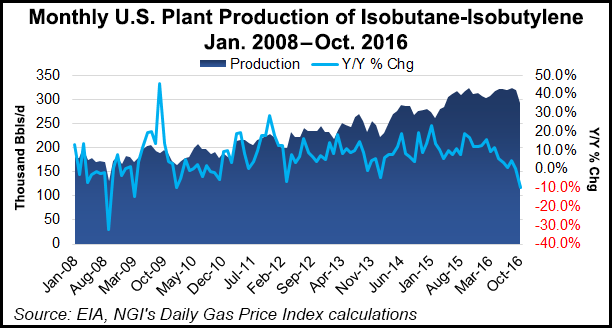 The project is supported by long-term contracts and is expected to be completed in the fourth quarter of 2019. The isobutylene produced will provide the feedstock to fill underutilized capacity at Enterprise’s existing downstream octane enhancement and petrochemical facilities.

Historically, steam crackers and refineries have been the major source of propane and butane olefins for downstream use. However, with the increased use of light-end feedstocks, specifically ethane, the need for on-purpose olefins has increased, Enterprise said. Much like the company’s propane dehydrogenation unit, currently scheduled for start of operations in the second quarter, Enterprise said the iBDH unit will help meet market demand where supplies have been reduced.

The plant will increase Enterprise’s production of both high-purity and low-purity isobutylene to be used primarily as feedstock to manufacture lubricants, rubber products and alkylate for gasoline blendstock, as well as MTBE for export.

For the full year, DCF, excluding proceeds from asset sales, increased to $4.1 billion compared to $4.0 billion in 2015. DCF provided 1.2 times coverage of 2016 distributions. Enterprise retained $709 million of DCF in 2016 to reinvest in the growth opportunities.

“Our performance for 2016 was highlighted by 11.7% volume growth for our NGL [natural gas liquids], refined products and petrochemical pipeline and marine terminal assets to a record 4.6 million b/d, which more than offset the impact of a 7.3% decline in volumes on our onshore crude oil pipelines and marine terminals compared to 2015,” Teague said. Cash flow generated from our fee-based businesses, new assets, expansions and cost control more than offset the decrease in cash flow from our crude oil, natural gas and commodity-sensitive businesses.”