Houston-based Enterprise Products Partners LP’s volumes climbed almost across the board during the second quarter on stronger activity in the natural gas pipelines, liquids fractionation, petrochemical and oil systems, with most of the business moving supply from the Permian Basin to the Texas coast and beyond. 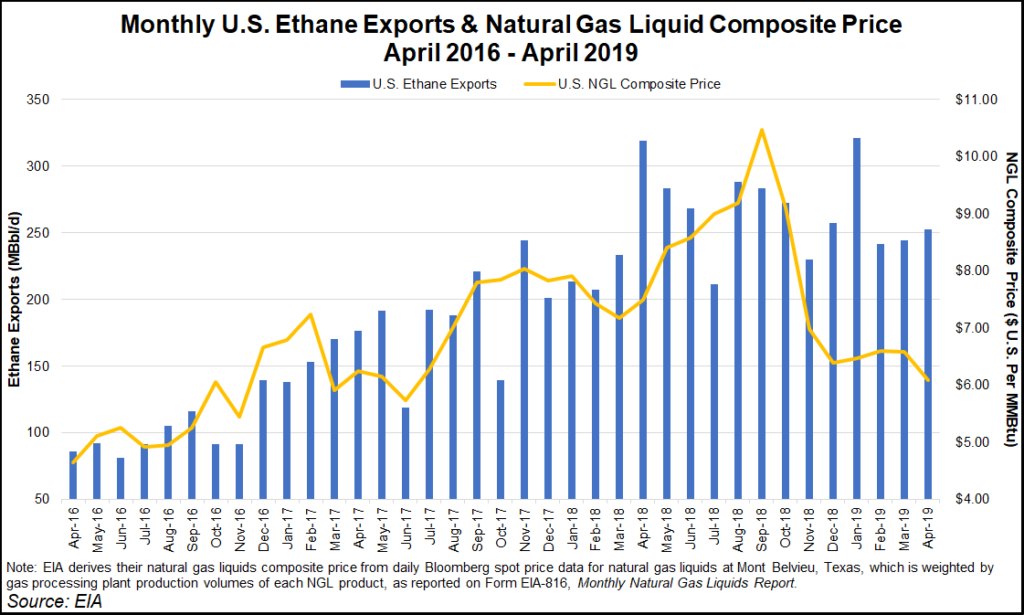 “In total, we reported 16 operational and financial records during the quarter,” general partner CEO A.J. “Jim” Teague said. “Record volumes in our fee-based businesses, contributions from new assets placed into service over the past year, and the benefit of natural gas price spreads across Texas more than offset the impact of lower natural gas liquids (NGL) prices on our natural gas processing activities.”

Gas pipeline volumes sailed past previous records to reach 14.5 trillion Btu/d from 13.7 trillion Btu/d in 2Q2018, while NGL fractionation volumes climbed to 1 million b/d from 927,000 b/d. In the fee-based gas processing business, volumes increased to a record 5.2 Bcf/d from 4.6 Bcf/d.

Each of the business segments also reported increases in gross operating margin compared with a year ago, Teague said.

Enterprise “brought into service $900 million of major growth projects in the second quarter of 2019,” Teague said, including two systems in the Permian: the third Orla gas plant and the Midland-to-Echo 2 crude pipeline.

“We are on schedule to complete construction of $3.2 billion of major growth projects in the second half of this year,” which include the following:

“We continue to make progress in underwriting additional organic growth projects, all of which should provide additional sources of cash flow and enhance the value of our partnership,” Teague said.

Ahead of the earnings announcement, Enterprise on Tuesday said it had clinched long-term agreements with Chevron Corp. that pave the way to provide more Permian oil takeaway, as well as funds to build a Texas offshore oil terminal.

In a suite of agreements with Chevron U.S.A. Inc., Enterprise said it would provide Permian crude transportation, as well as storage and marine terminaling services at its Enterprise Crude Houston, aka ECHO, terminal in Houston.

“These agreements support our Permian offtake strategy by providing greater takeaway capacity for our increasing Permian production,” said Chevron Supply & Trading President George Wall. “As our production scales up, we will have the means to get those energy resources to the market.”

Chevron, already one of the biggest producers in the Permian, expects to more than double its output to 900,000 boe/d by 2023.

Because of a second agreement with Chevron, Enterprise also sanctioned the Sea Port Oil Terminal (SPOT), which is to include onshore facilities in Brazoria County east of Houston and a fixed platform about 30 nautical miles offshore in 115 feet of water. SPOT would load very large crude carriers at rates of around 85,000 bbl per hour or up to 2 million b/d.

Enterprise needs to obtain approvals and licenses from the Maritime Administration, which it said is reviewing the SPOT application.