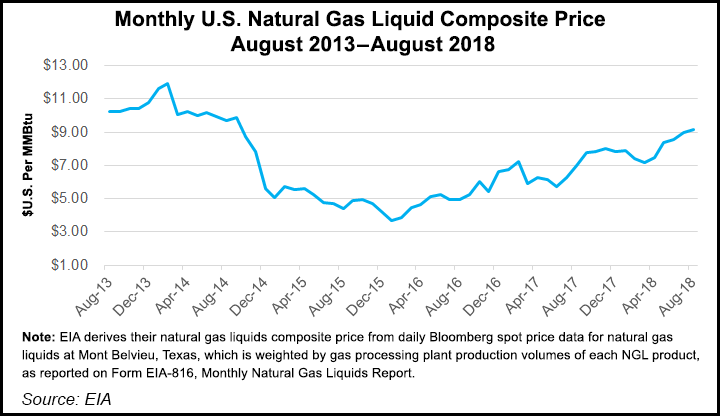 EPD on Wednesday said it plans to expand the NGL fractionation capacity at its Mont Belvieu facility near Houston by another 150,000 b/d in order to meet growing demand from the expanding petrochemical industry on the Gulf Coast, as well as global demand for NGLs. Once service begins, the expansion would increase EPD’s NGL fractionation capacity to 1 million b/d in the Mont Belvieu area, and about 1.5 million b/d companywide.

At the same time, the Houston-based midstream operator is also working to alleviate processing constraints in the Permian. EPD has begun constructing the Mentone cryogenic gas processing plant in Loving County, TX. The facility, which is expected to begin service in 1Q2020, would have the capacity to process 300 MMcf/d of natural gas and extract in excess of 40,000 b/d of NGLs.

As part of its network to support the development of the Mentone plant, EPD is constructing 66 miles of large-diameter gathering and residue pipelines and expanding compression capabilities. The projects would allow the Mentone plant to link to the partnership’s NGL system, including the Shin Oak pipeline that is scheduled for completion in 2Q2019, as well as its existing Texas intrastate natural gas pipeline network.

The Mentone plant complements EPD’s Orla natural gas processing complex in Reeves County, TX, where the second of three trains is now in service and the third train is on schedule for completion in 2Q2019. Combined, the Orla and Mentone facilities would provide 1.3 Bcf/d of gas processing capacity and 195,000 b/d of NGL production.

Including both the Mont Belvieu and Mentone projects, EPD has $6.6 billion of growth capital projects under construction that are scheduled to be completed and generating new sources of cash flow between now and 2020, management said.

“The current environment of strong demand for midstream energy services, coupled with productive discussions with customers to develop new infrastructure projects across all four of our business segments, is the strongest business climate we have seen in recent memory,” Teague said.

Robust volumes across EPD’s integrated midstream system, from the producing regions to end user and international demand, boosted operational and financial records again during the quarter.

EPD reported third quarter net income of $1.33 billion (60 cents/share), a jump of $714 million from third quarter 2017 earnings of $621 million (28 cents), a portion of which is attributable to its hedging activities related to the Midland-to-ECHO crude oil pipeline. Distributable cash flow for the quarter was $1.58 billion, up from $1.065 billion in 3Q2017.

EPD invested $1.1 billion in capital investments in the third quarter, which included sustaining capital expenditures of $76 million. The midstreamer expects its total growth capital spending for 2018 to be about $4.2 billion, which includes the $151 million to acquire the remaining 50% equity interest in Delaware processing. Sustaining capital expenditures for 2018 are expected to be about $315 million.