Besides powering a manufacturing/petrochemical industry renaissance, North America’s abundant supply of shale gas is fueling a war of words over the merits of energy exports versus domestic usage. 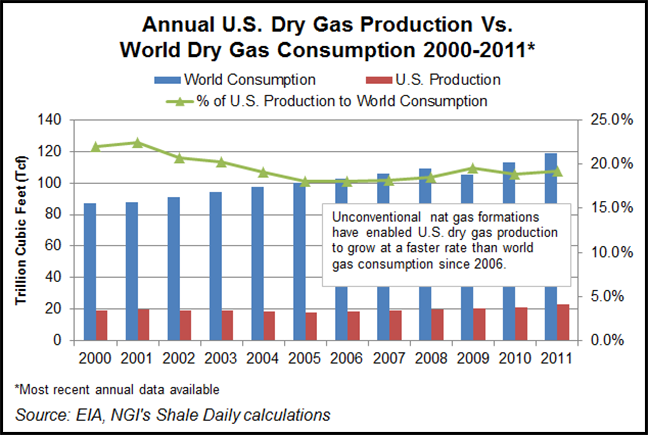 Keeping U.S. natural gas at home would yield more economic bang per molecule than liquefying and exporting it, according to a study conducted by Charles River Associates and paid for by The Dow Chemical Co., which has lobbied hard against exporting liquefied natural gas (LNG).

The study, “US Manufacturing and LNG Exports: Economic Contributions to the US Economy and Impacts on US Natural Gas Prices,” focused mainly on the anticipated growth in gas-intensive manufacturing and how it may contribute to U.S. gross domestic product (GDP), employment and the trade balance. Charles River said its research found that:

These findings are in sharp contrast to other studies that have found that exporting liquefied domestic gas would have a negligible effect on domestic gas prices in most cases and that U.S. exports would quickly shrink the margins available to exporters, therefore limiting the amount of LNG that would actually be shipped abroad. One industry expert told NGI last summer that 10 years from now the United States will be “lucky to see more than 1 Bcf/d” of exports (see Daily GPI, Aug. 9, 2012).

Most noteworthy among the studies that are supportive of LNG exports is one conducted by NERA Economic Consulting and paid for by the U.S. Department of Energy (DOE). Its findings were released in December and essentially said that LNG exports would be supportive of the U.S. economy in just about any amount, the more the better.

However, shortly after the report’s release, DOW Chemical Co. CEO Andrew Liveris said the report “is flawed, misleading and based on outdated, inaccurate and incomplete economic data. The report fails to give due consideration to the importance of manufacturing to the U.S. economy [see Shale Daily, Dec. 10, 2012].”

The NERA study found that U.S. LNG export potential would be limited by market forces. However, Charles River asserted that NERA used “incorrect assumptions” that led to “a massive understatement” of export potential.

“NERA came to its conclusion because it grossly overstated the netback costs to the United States from major LNG markets,” Charles River said. “Higher netback costs lower payments to providers of natural gas and thus decrease the incentive to export. Netback costs include the cost of liquefaction at the export terminal, shipping and regasification at the import terminal…NERA used a netback cost that is twice as high as costs quoted by publicly available sources used in our analyses.”