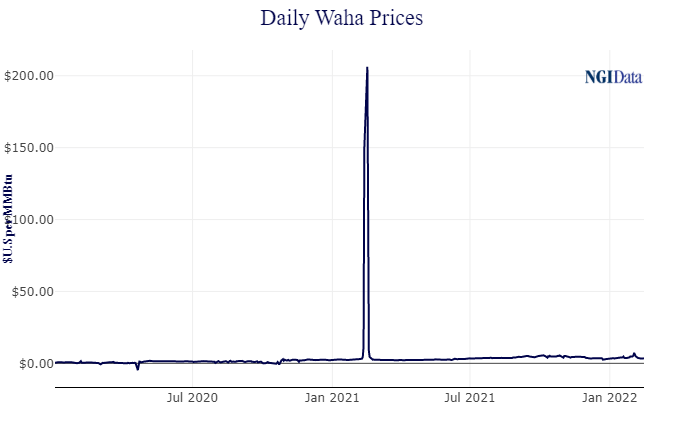 The Dallas-based storage and transportation firm divides its business into four geographic segments – the Permian Basin, Louisiana, Oklahoma and North Texas – and said results were steady in the latter two while rebounding in the Permian and Louisiana alongside surging oil and gas activity.

Fourth-quarter profit – before taxes and other costs – on storage and delivery of natural gas from the Permian, which straddles Texas and New Mexico, spiked 72% year/year, while oil income in the prolific basin jumped 22%.

“EnLink delivered robust growth in our Permian and Louisiana segments, and we began to see the stability we’ve projected in Oklahoma and North Texas as higher commodity prices spur an increase in activity,” CEO Barry Davis said during an earnings call with analysts Wednesday.

EnLink’s average natural gas gathering volumes for the fourth quarter were 8% higher in the Permian than the third quarter and 28% greater than a year earlier, the company said.

EnLink said average fourth quarter natural gas transportation volumes in the Louisiana segment were 16% higher than the previous quarter and 12% higher than 4Q2020.

U.S. natural gas prices doubled during 2021 amid a commercial and industrial demand rebound from the pandemic, strong weather-driven residential consumption and record levels of demand for U.S. exports. Oil prices also shot up about 40% in 2021 as demand for travel fuels escalated amid coronavirus vaccination campaigns.

EnLink expects to generate more than $300 million in FCF again in 2022. It estimated full-year net income between $230 million and $310 million, driven by anticipated robust growth in the Permian.

Separately on Wednesday, EnLink announced a memorandum of understanding (MOU) with Talos Energy to provide a complete carbon capture, transportation and sequestration (CCS) offering for industrial-scale emitters in Louisiana.

The partnership would combine EnLink’s midstream assets with Talos’ subsurface assets. Talos has secured 26,000 acres in Louisiana providing sequestration capacity of about 500 million metric tons, which will be known as River Bend CCS.

“We have a unique and very real opportunity to build a significant CCS business over time by repurposing existing assets in Louisiana,” Davis said. “We believe CCS provides a meaningful path forward to help industrial carbon dioxide emitters achieve their emission reductions goals.”

Within the United States, he said, emissions from industrial and power generation make up nearly half of all carbon dioxide emissions. The state of Louisiana is the second-largest industrial emitting state in the country and also ranks as the state with the second greatest sequestration potential due to its geology, Davis added.

“The majority of the emission sources are industries that are critical to our daily lives, like fertilizer plants and chemical plants that make a key component used to make plastics,” Davis said. “EnLink is the natural service provider in the state of Louisiana, particularly with the highly dense area of the Mississippi River corridor where we bring decades of relationships and reliable operating experience, plus over 4,000 miles of pipe already in place.

“We plan to utilize our existing pipeline infrastructure and expertise in building midstream infrastructure to provide cost-efficient transportation, while reducing the environmental impact compared to new pipeline construction.”