Higher commodity prices are driving double-digit natural gas volume growth in the Permian Basin for EnLink Midstream LLC, but the turnaround in Oklahoma production is “perhaps the most impressive,” according to management. 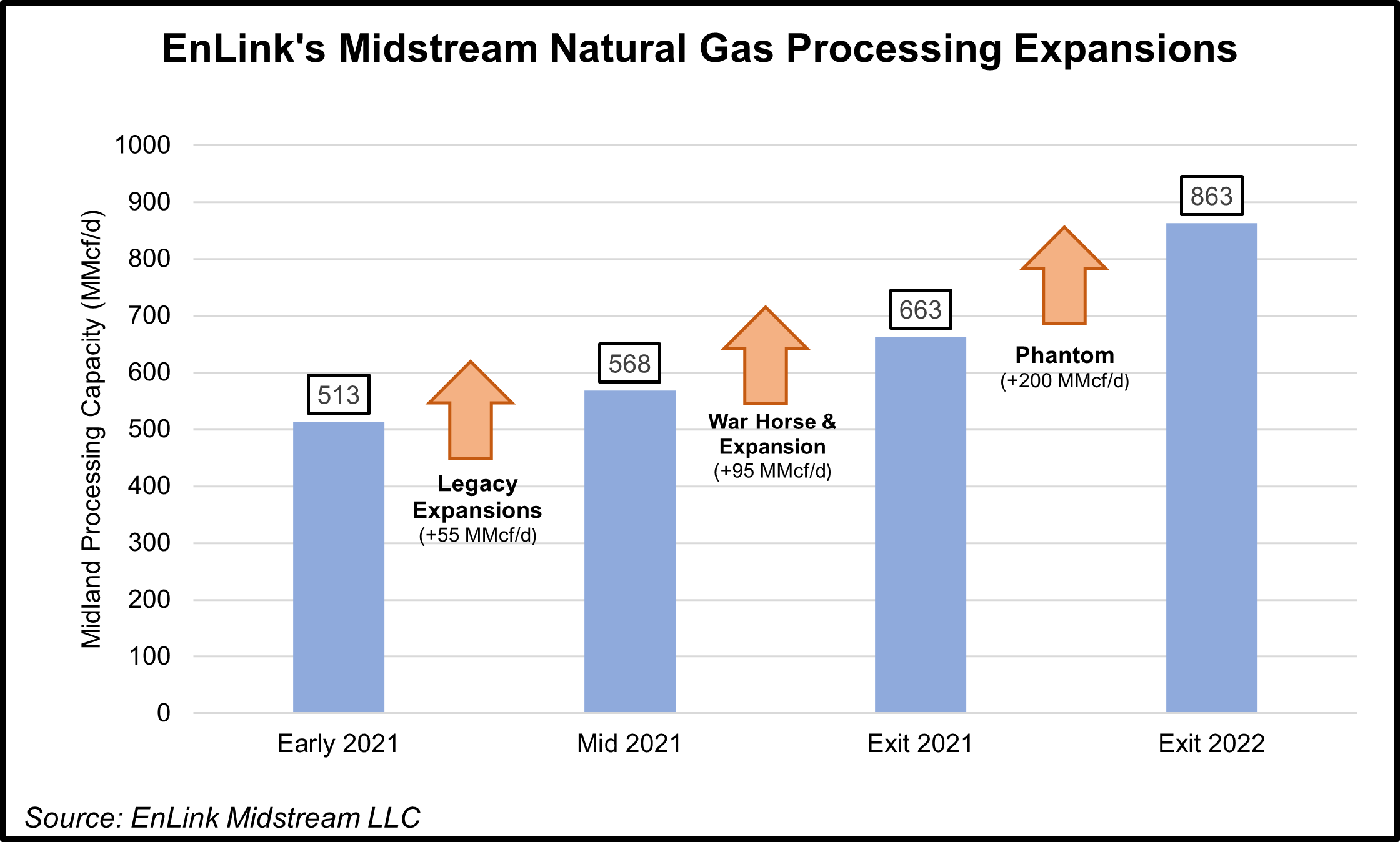 “The volume story out of Oklahoma continues to brighten as producers have responded to the improved pricing environment,” said EnLink COO Ben Lamb earlier this month during a call to discuss first quarter earnings.

Average natural gas gathering volumes for 1Q2022 were 7% higher year/year, according to EnLink. Natural gas processing volumes were 8% higher when compared with the first quarter of 2021.

Lamb cautioned that because of the timing of wells coming online, EnLink management expects a modest decrease in volumes in the second quarter. “That said, producer activity within our footprint has consistently remained at a high level this year, and producer plans call for increasing activity.”

As a result, EnLink management now expects Oklahoma to return to “meaningful” volume growth in 2023. Lamb said the company’s assets are well positioned for the growth. The midstream company may be able to accommodate about 25% more processing volumes, even after EnLink relocates one of its gas processing plants in Oklahoma to the Permian.

Beyond that, there is excess capacity still in the Permian beyond EnLink’s excess capacity, according to Davis As a result, management does not see a need to add incremental processing capacity on the horizon.

“Now, if we have multiple years of this price environment, and we see a further increase in activity, perhaps that changes. But it’s not on the cards today,” Davis said.

“Producer momentum across our footprint has remained strong, setting the stage for solid growth in 2022 and end of 2023,” Lamb said of Permian activity.

“Importantly, our systems are well established to handle this growth with the additions of the War Horse and Tiger plants, both of which came online in the fourth quarter of 2021,” Lamb said.

Davis noted that the progress made over the past several quarters “is impressive,” with the outlook for the remainder of the year and beyond continuing to strengthen. “Our business is clearly benefiting from the supportive commodity price environment…However, the strong execution by our team has amplified the benefit from higher commodity prices.”

EnLink’s management team is beginning to think about what the steps may be in the Permian after the Phantom plant relocation, according to Davis. The CEO indicated that all the same options considered when the decision was made to relocate Phantom “would be on the table for the next step.”

Russia’s invasion of Ukraine adds another layer of opportunity for EnLink, according to management. Lamb noted that there is going to be a call on North American natural gas driven by the recent geopolitical events. “It’s going to take a number of years for our industry to meet that call, and it’s going to create opportunities.”

“There is nothing we love more than doing projects like those. And so, we’re very keen to find our next steps in Louisiana,” Lamb said. “That’s the great thing about our Louisiana platform – it puts us right in the middle of where those opportunities are going to happen on the Louisiana Gulf Coast.”

Given the positive outlook for the remainder of the year, EnLink raised its full-year guidance. The company now expects to report full-year net income of $315-375 million, up from $230-310 million in previous guidance.

Based on current producer activity and plans, the midstreamer expects to spend $325-365 million on capital projects in 2022. These projects leverage existing infrastructure and have high expected returns and quick paybacks, according to management.

EnLink also boosted its projected free cash flow after distributions to $320-370 million. It repurchased $23 million of common units during the first quarter.